Mount Vernon, home to George and Martha Washington and their family, is the most popular home in America- over one million people visit each year. The home, located twenty minutes outside downtown Washington DC in Mount Vernon, Virginia, was originally a 8,000 acre complex with five farms: Dogue Run, Muddy Hole, River, Union, and Mansion House Farms. Washington also built a gristmill and distillery on the property, which is on the banks of the Potomac River, with Maryland on the other side of the river.  Washington took possession of the home in 1739 and completed a major renovation by 1787.  After George and Martha died in 1779 and 1802 respectively, the home was passed on to family until 1860, when the home was open to the public.  The now 50 acre site includes over two dozen areas to explore. We’ve included ten spots children will most enjoy.

Mount Vernon offers numerous activities and special events throughout the year, from the Revolutionary War weekend in spring to an American Celebration in July to Colonial Market and Fair in the fall and Christmas at Mount Vernon. There are so many reasons to return each season! 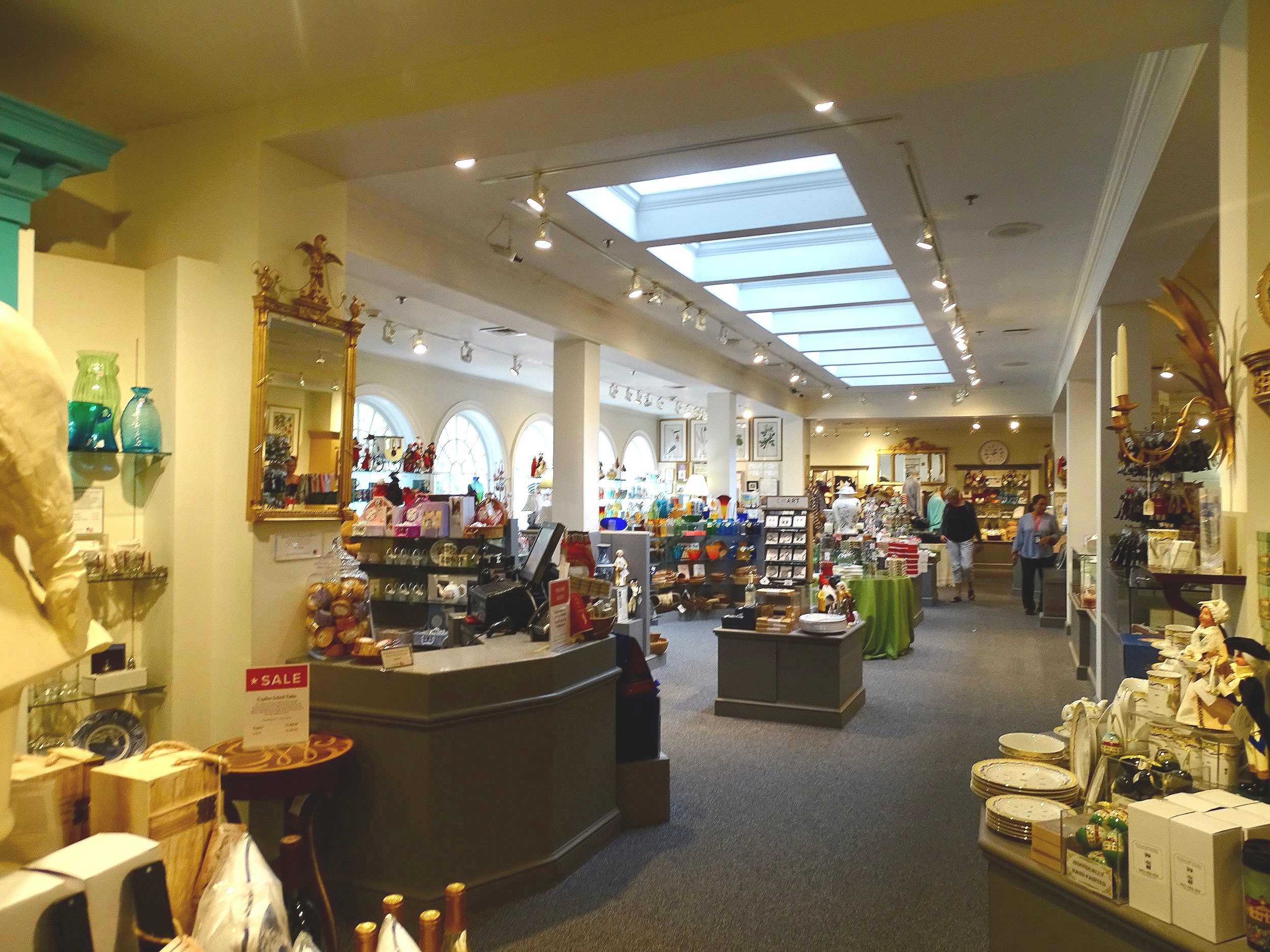 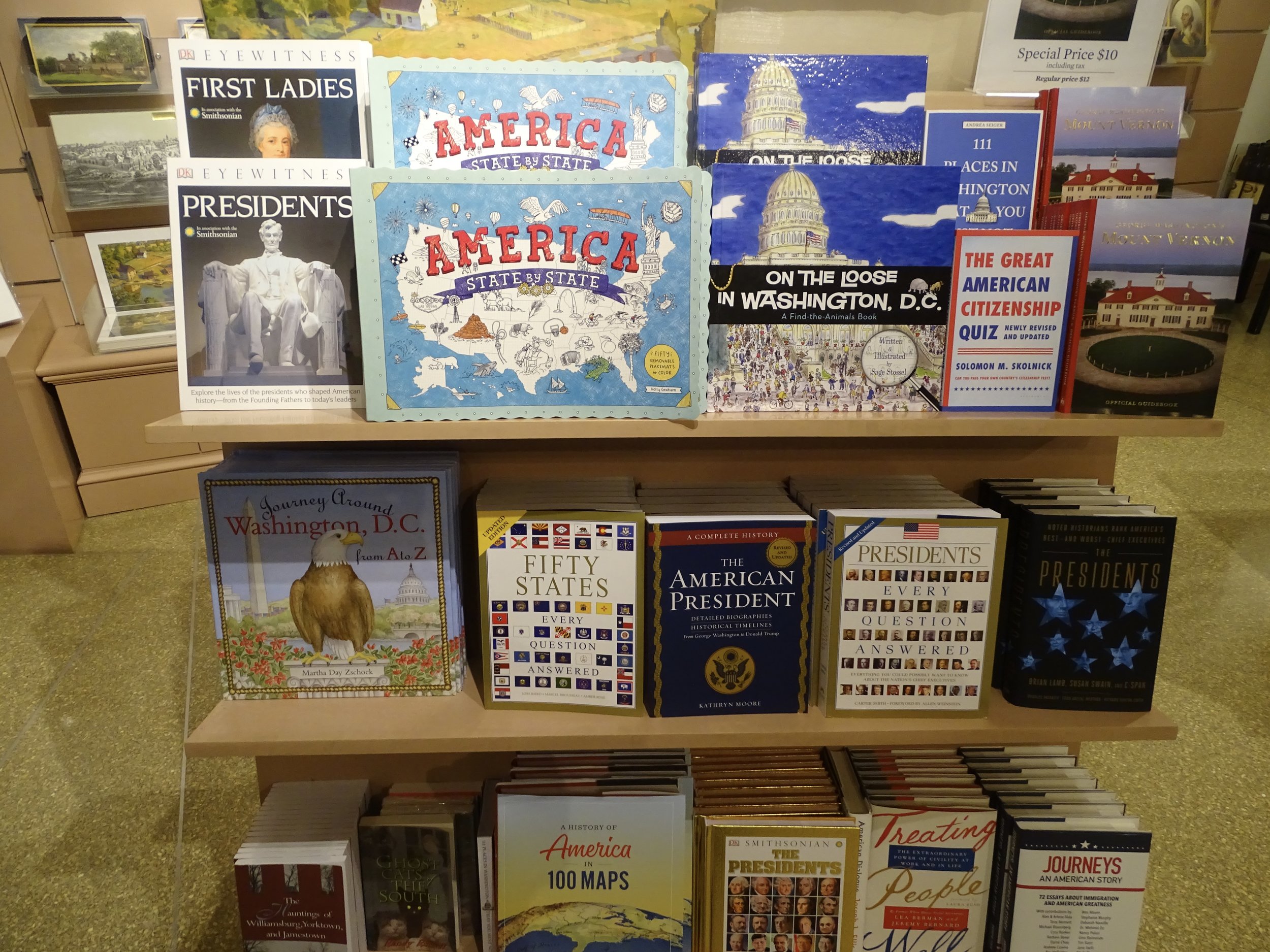 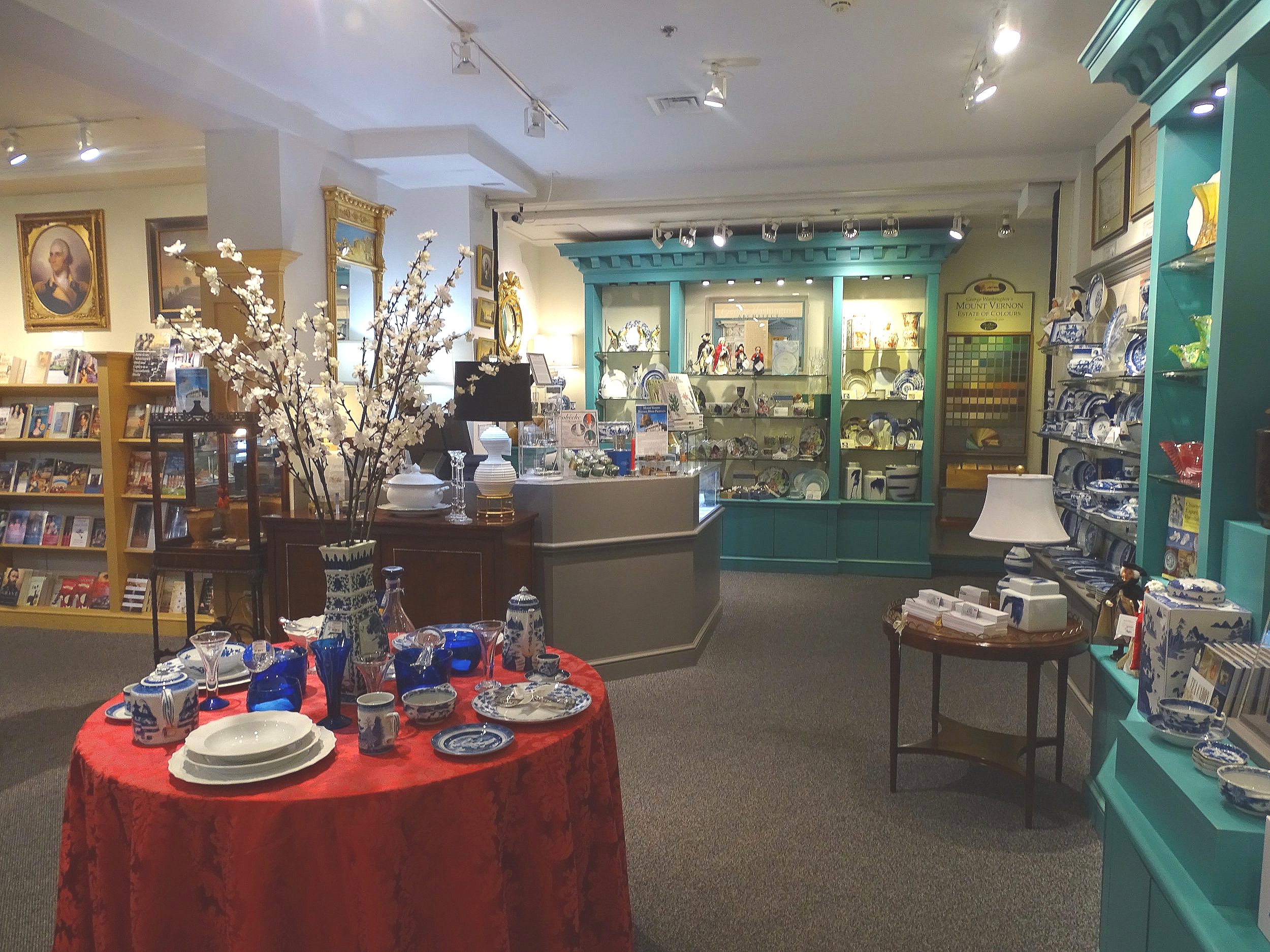 1. The Orientation Center: Check out the miniature dollhouse version of the mansion and the five stained glass murals depicting important moments in Washington’s life. Watch the “We Fight To Be Free”, a 25 minute video that describes Washington’s involvement in the French and Indian War. Grab a daily schedule of events. 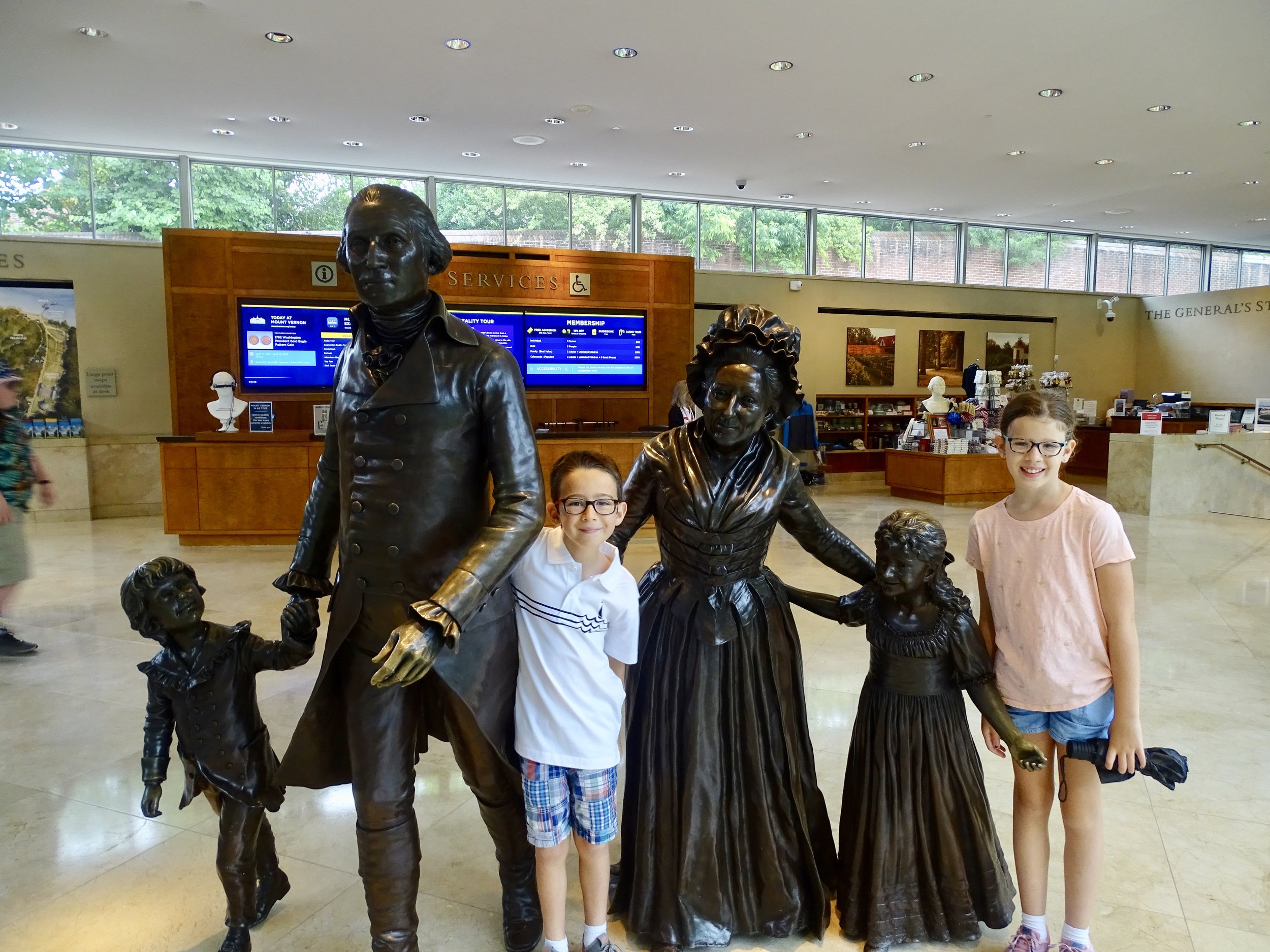 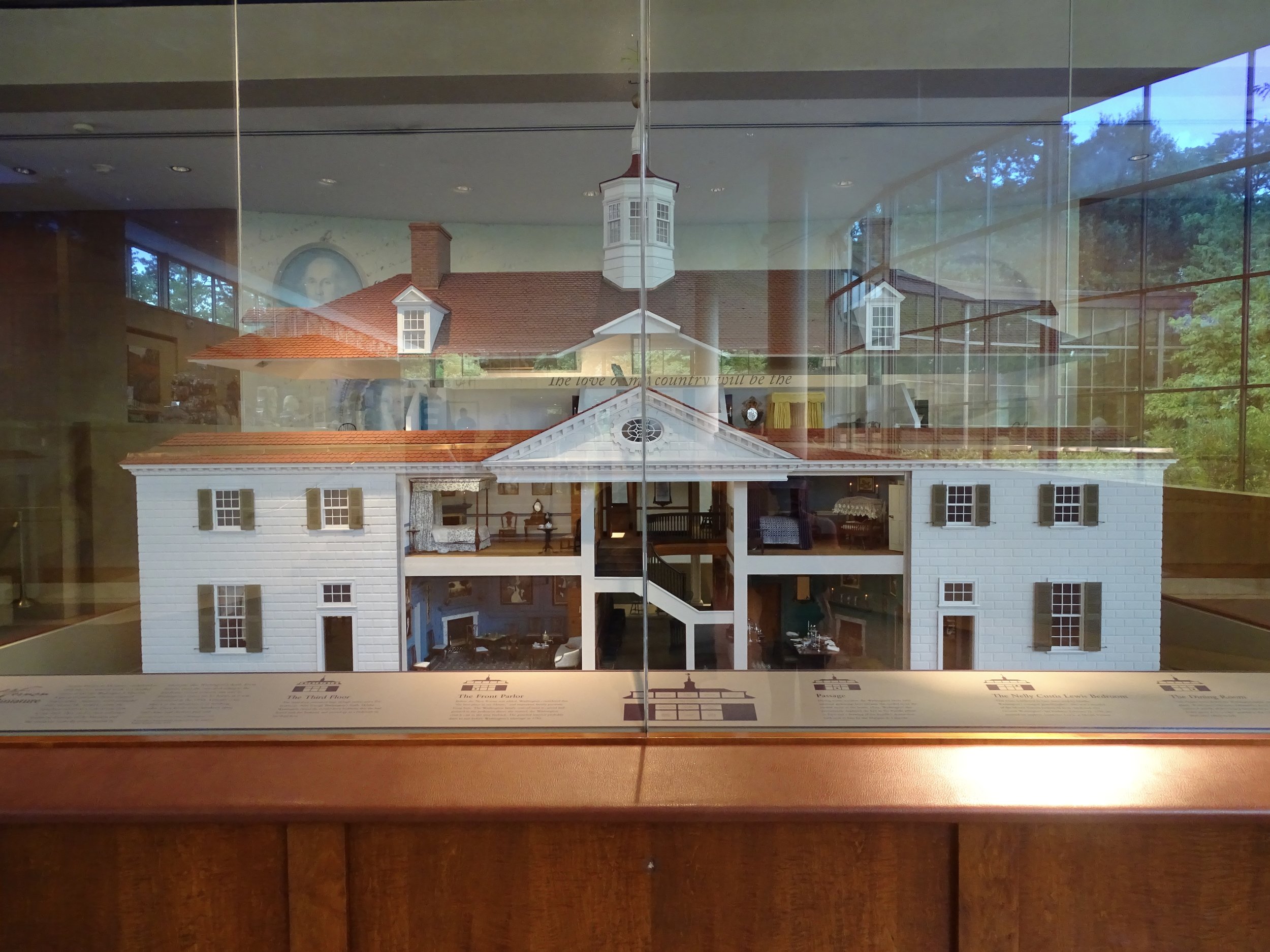 2. The Mansion: Guided tours are timed and offered every 5-10 minutes and include up to 15 people. It’s a short, five minute walk from the Orientation Center to the Main House and the home is air conditioned and heated. The home includes 21 rooms on three floors, with public access to the first and second floors. The first floor is handicap accessible and while the second floor is not, guides have iPads with full digital tours online. These iPads are also a great option if toddlers get antsy on the tour. Approximately half of the objects on display in the mansion are original to the Washington family. Children will especially enjoy seeing the: 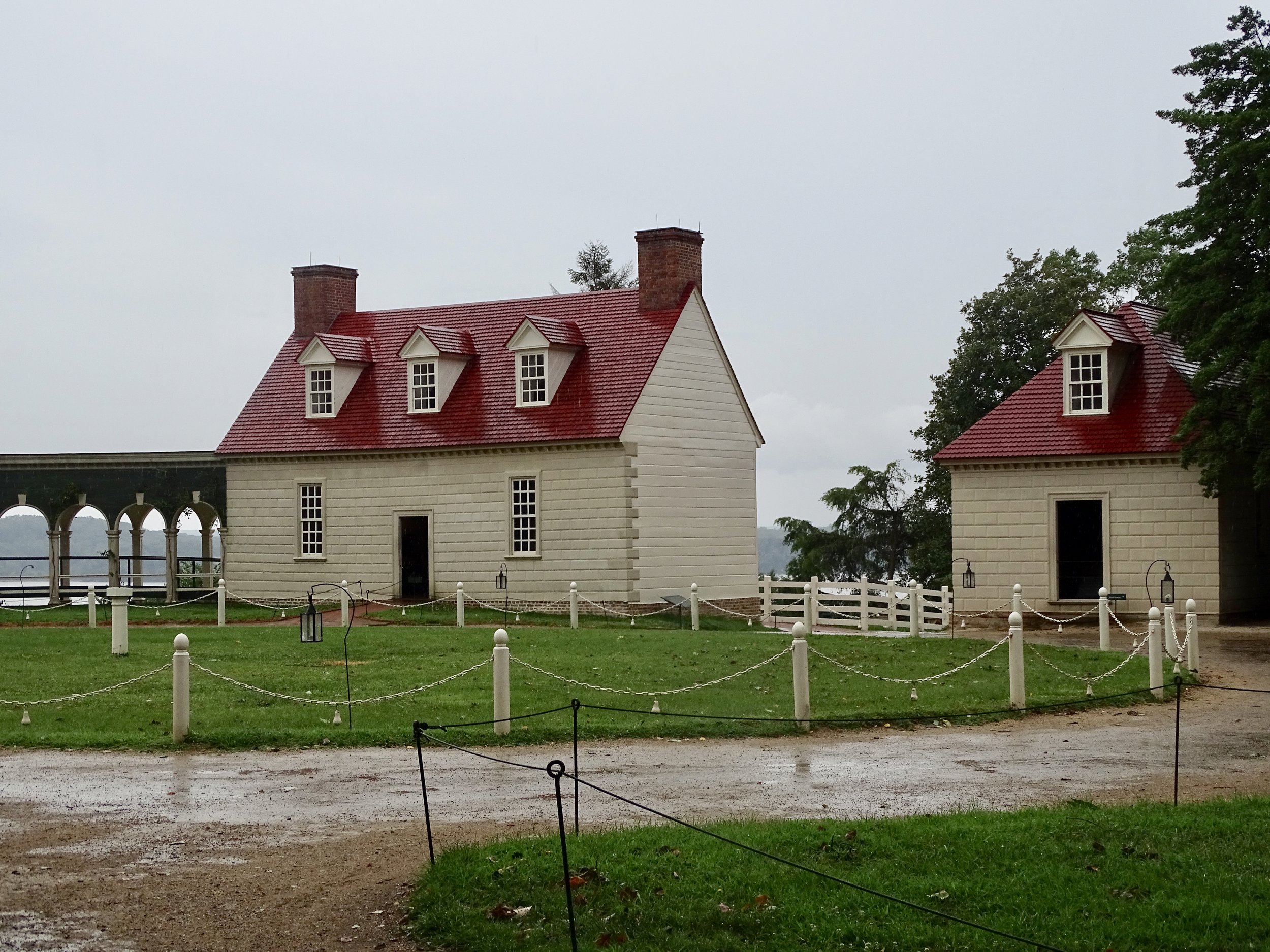 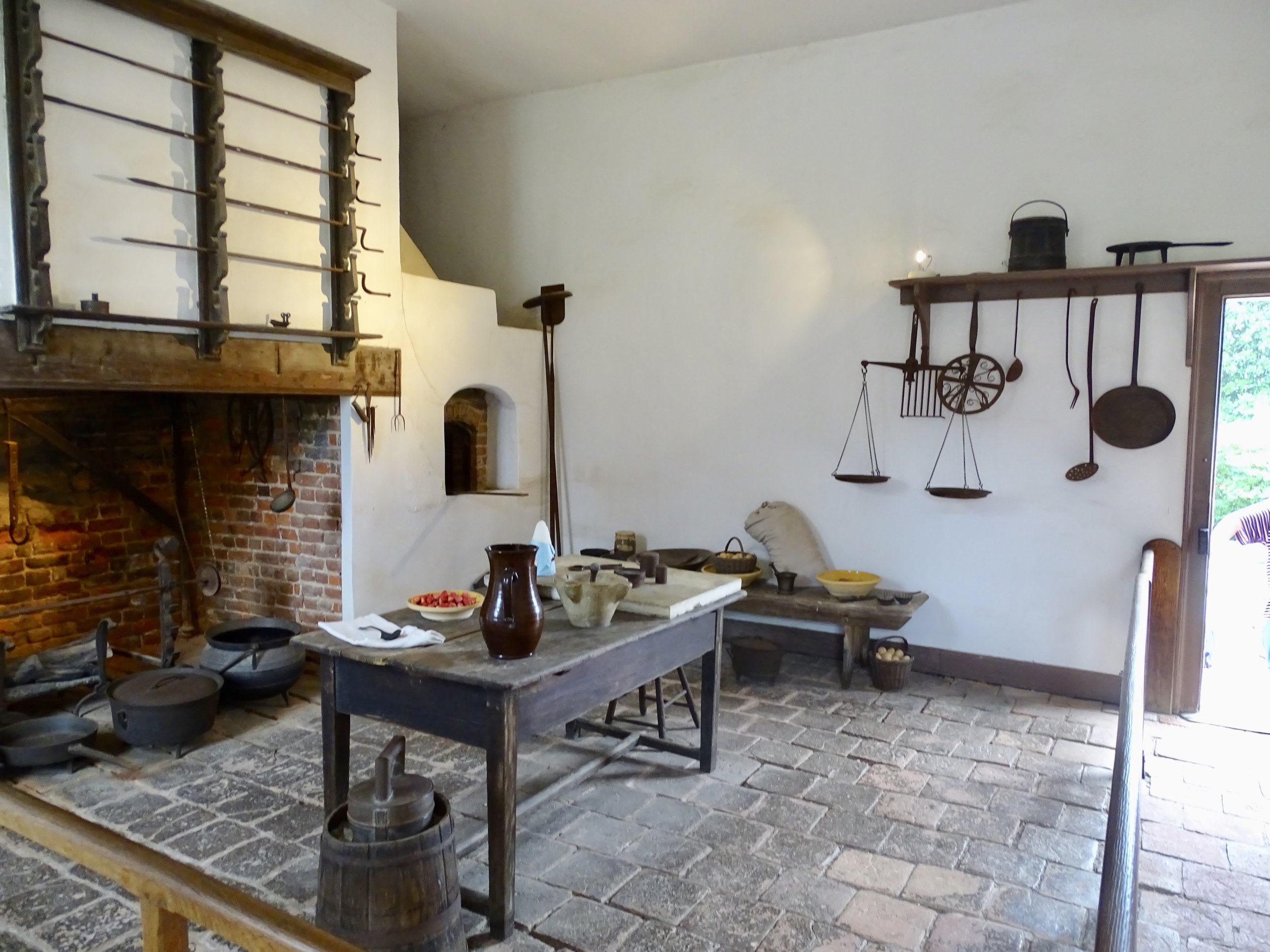 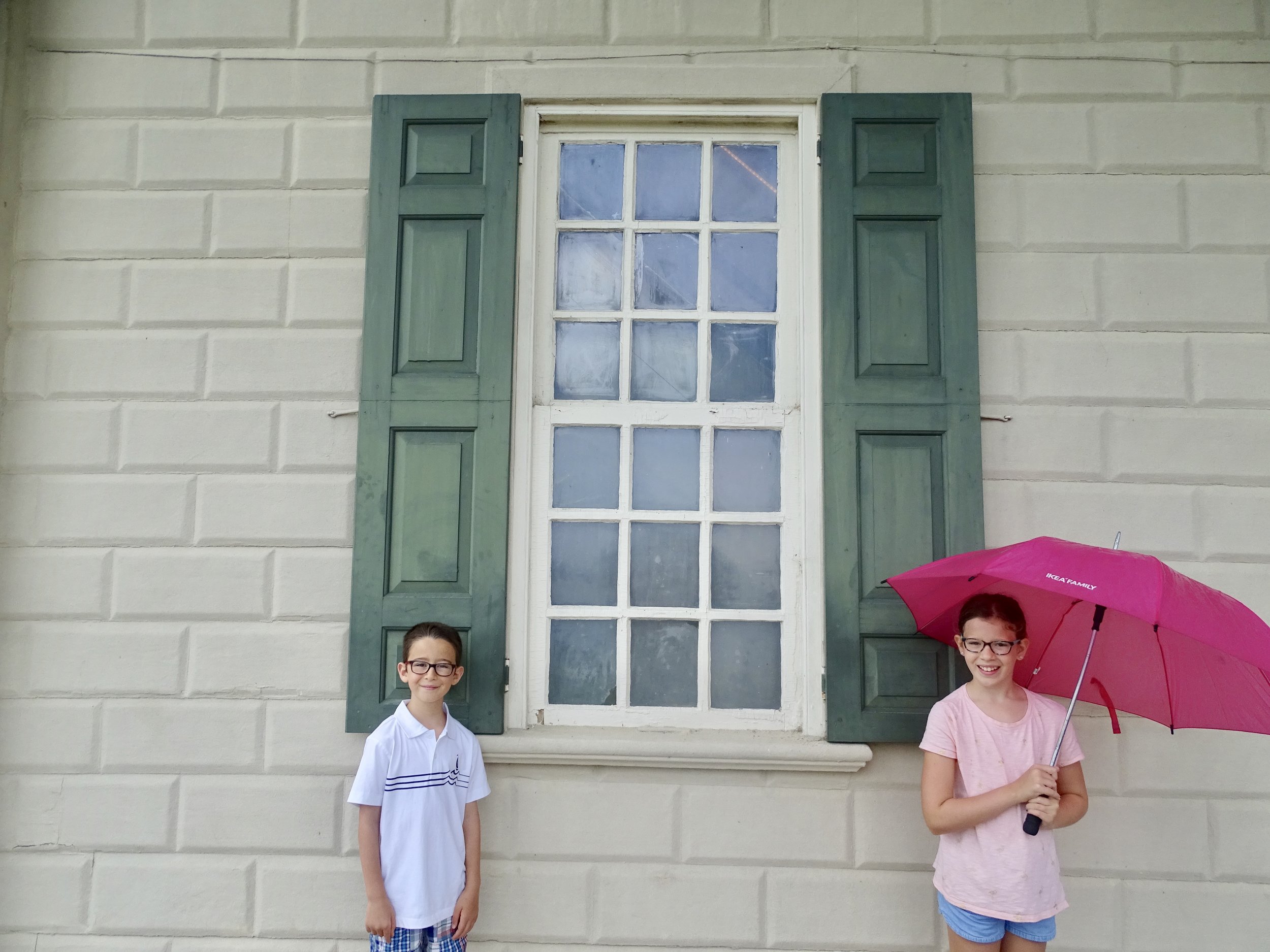 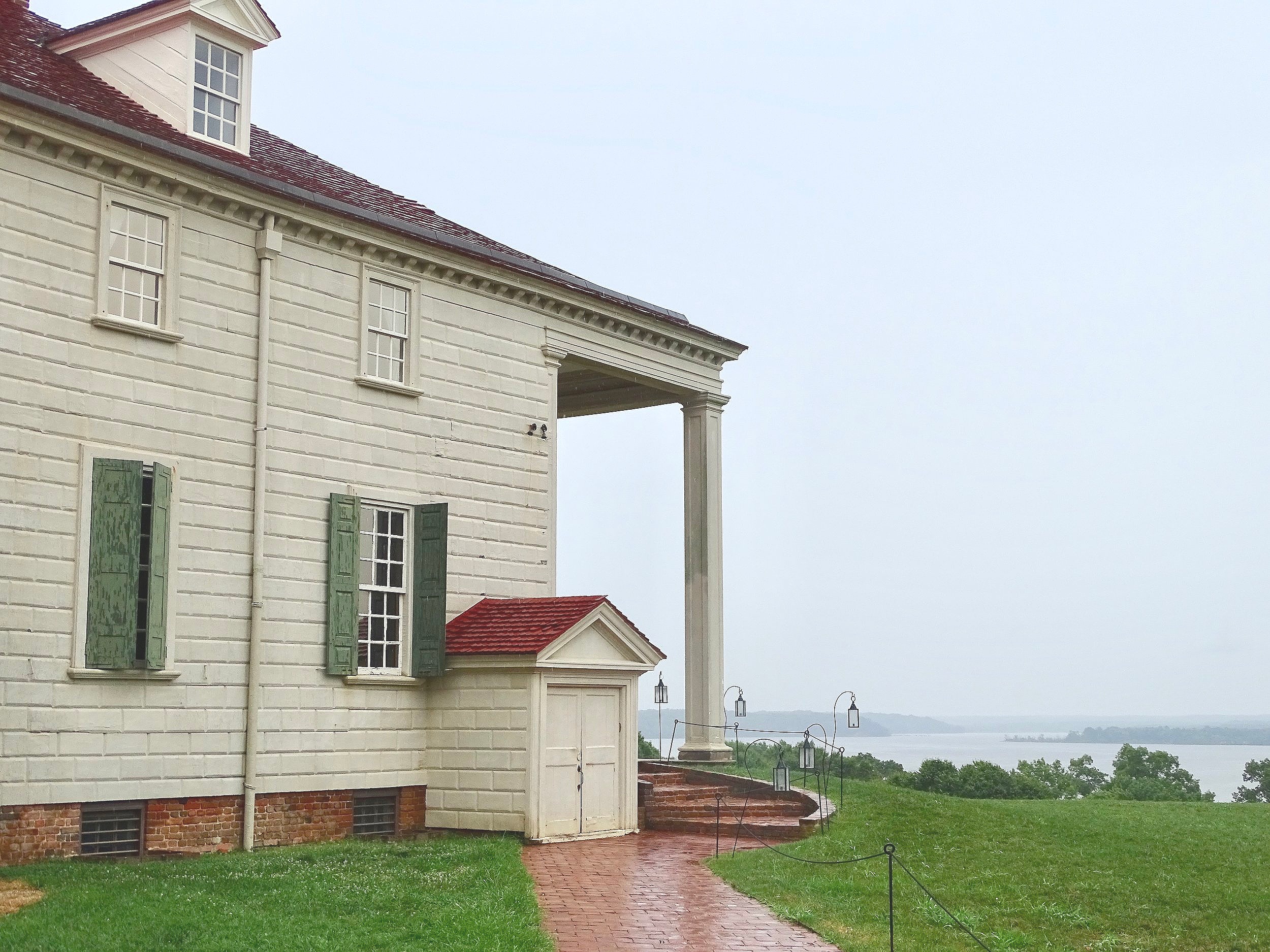 3. Outside structures to the right of the house: Peek inside the Clerk’s Quarters, Smokehouse, Washhouse and Coach house and check to see if any animals are being housed in the coach house. 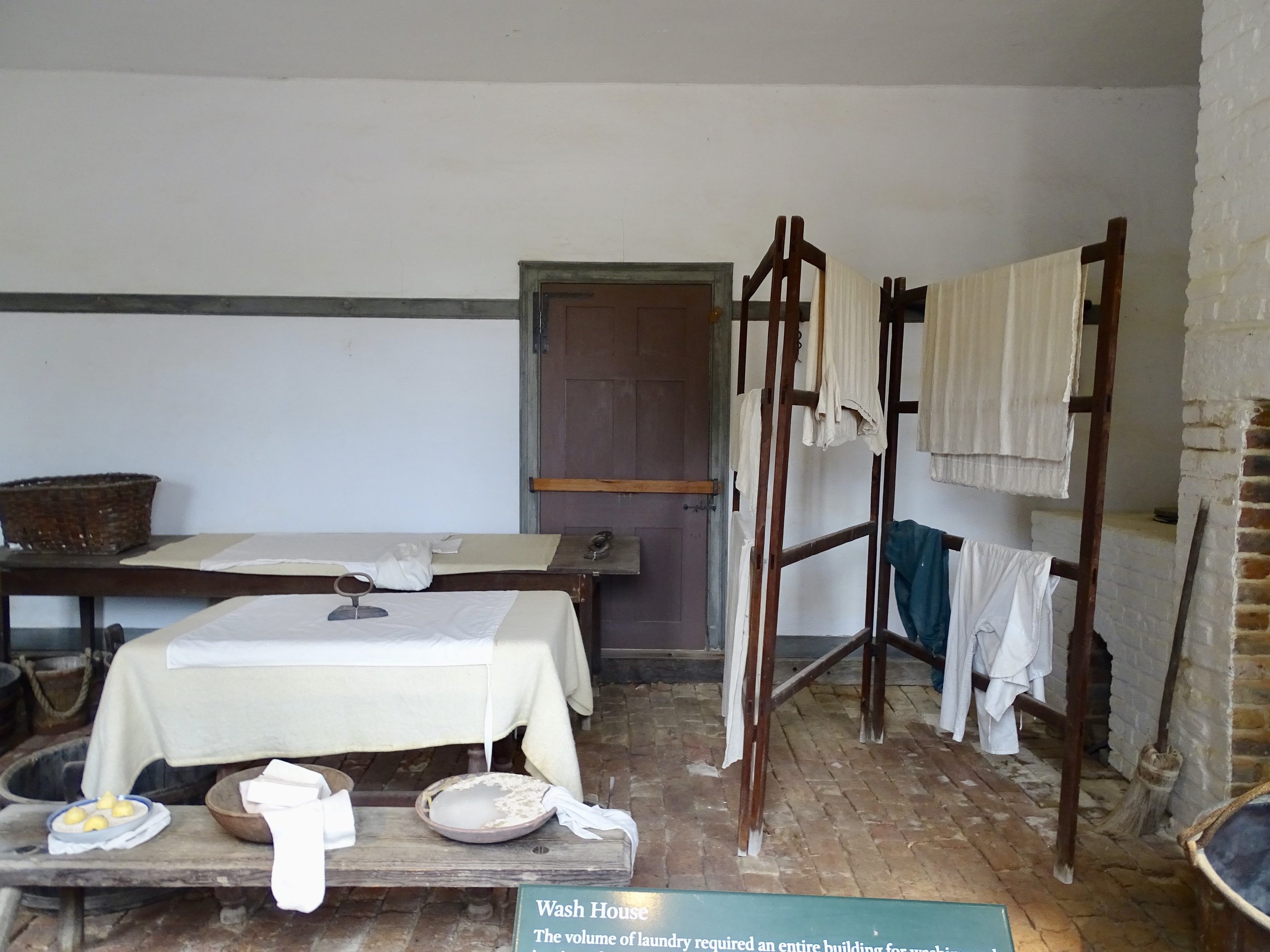 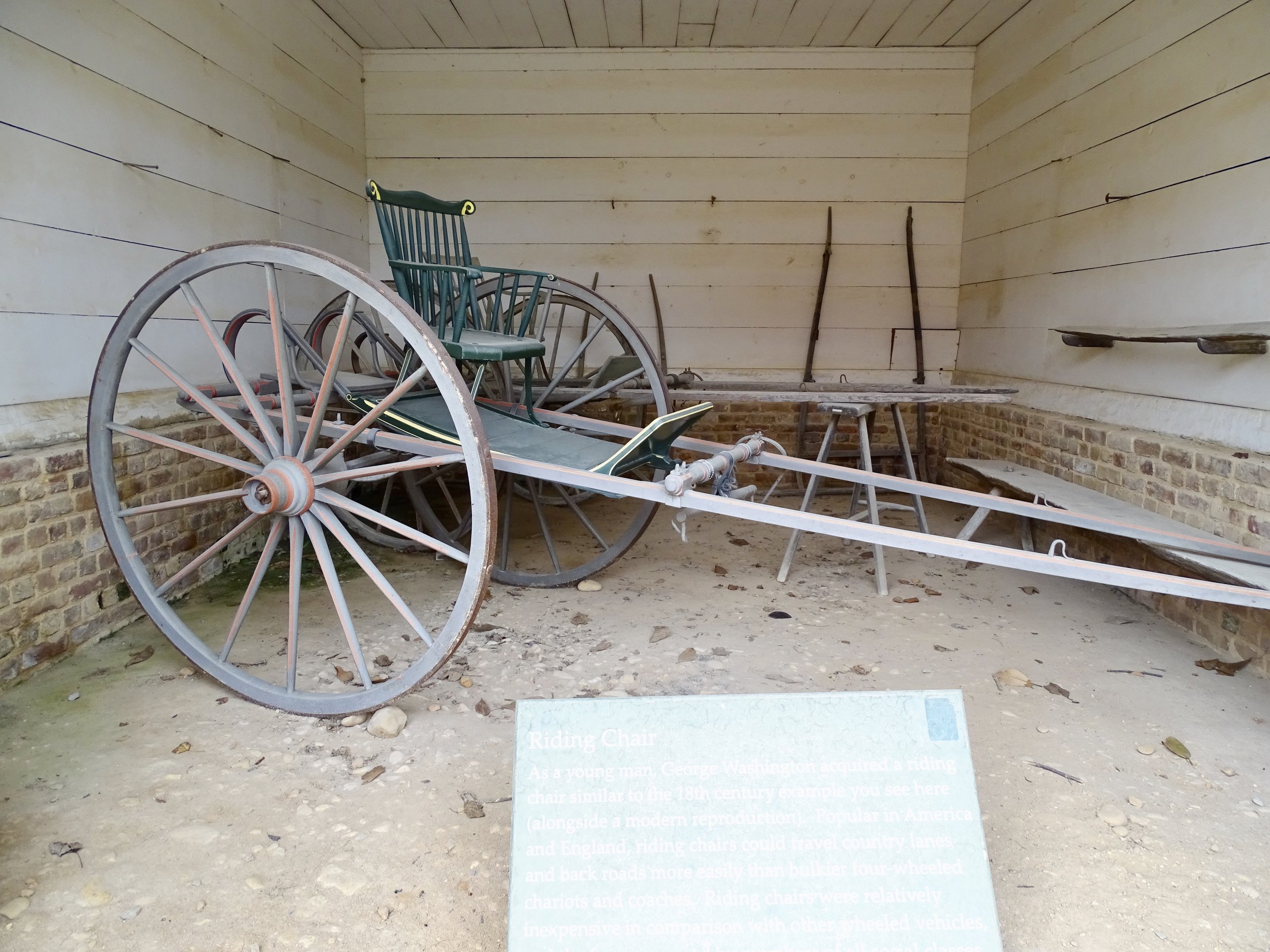 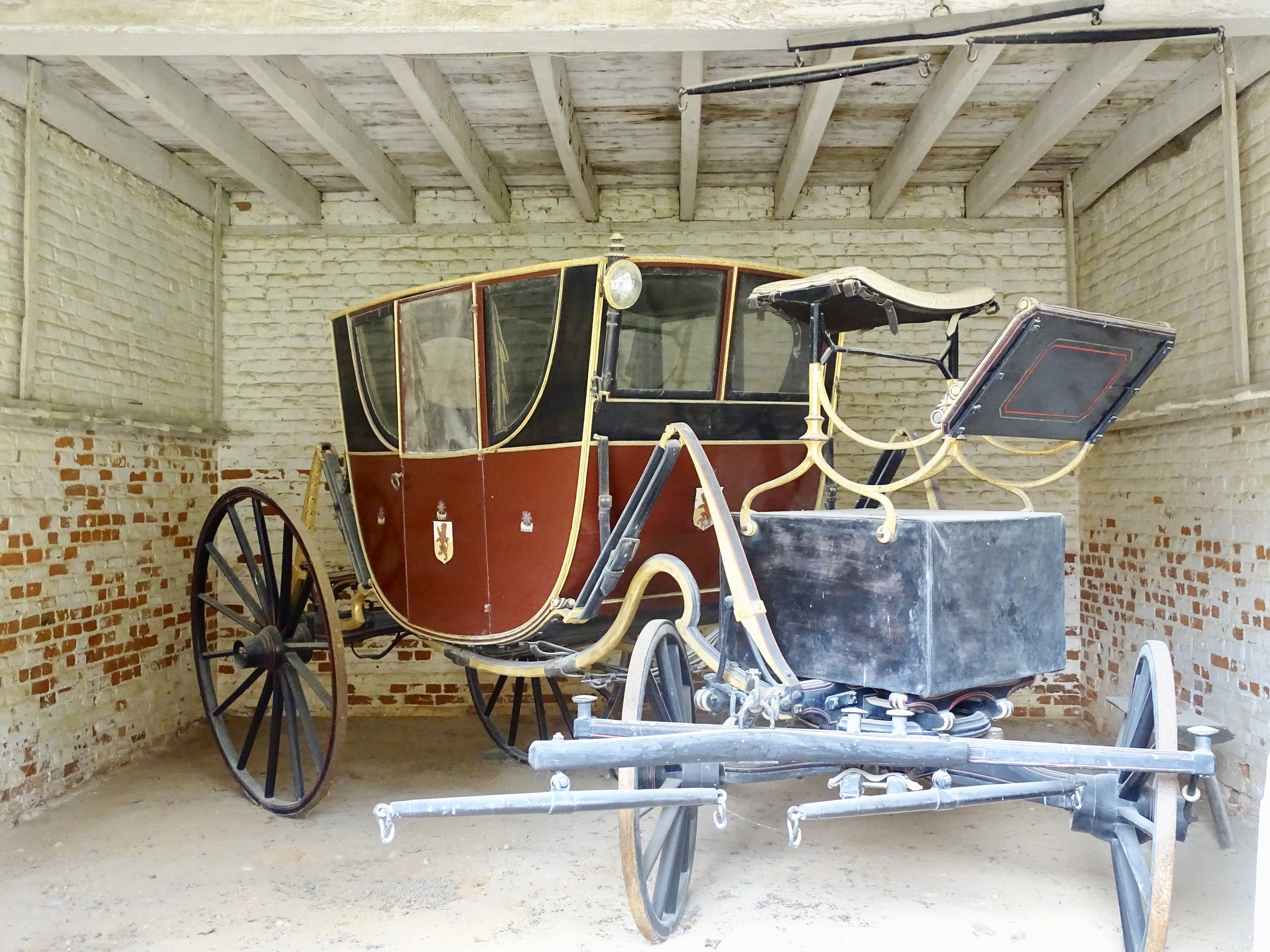 4. Tomb of Washington’s family: Start at the Old Tomb vault where George, Martha, and 20 other family members lay in repose until 1831 when they were moved to the current tomb. George is buried on the right, Martha on the left, and family members in the vault in the back. 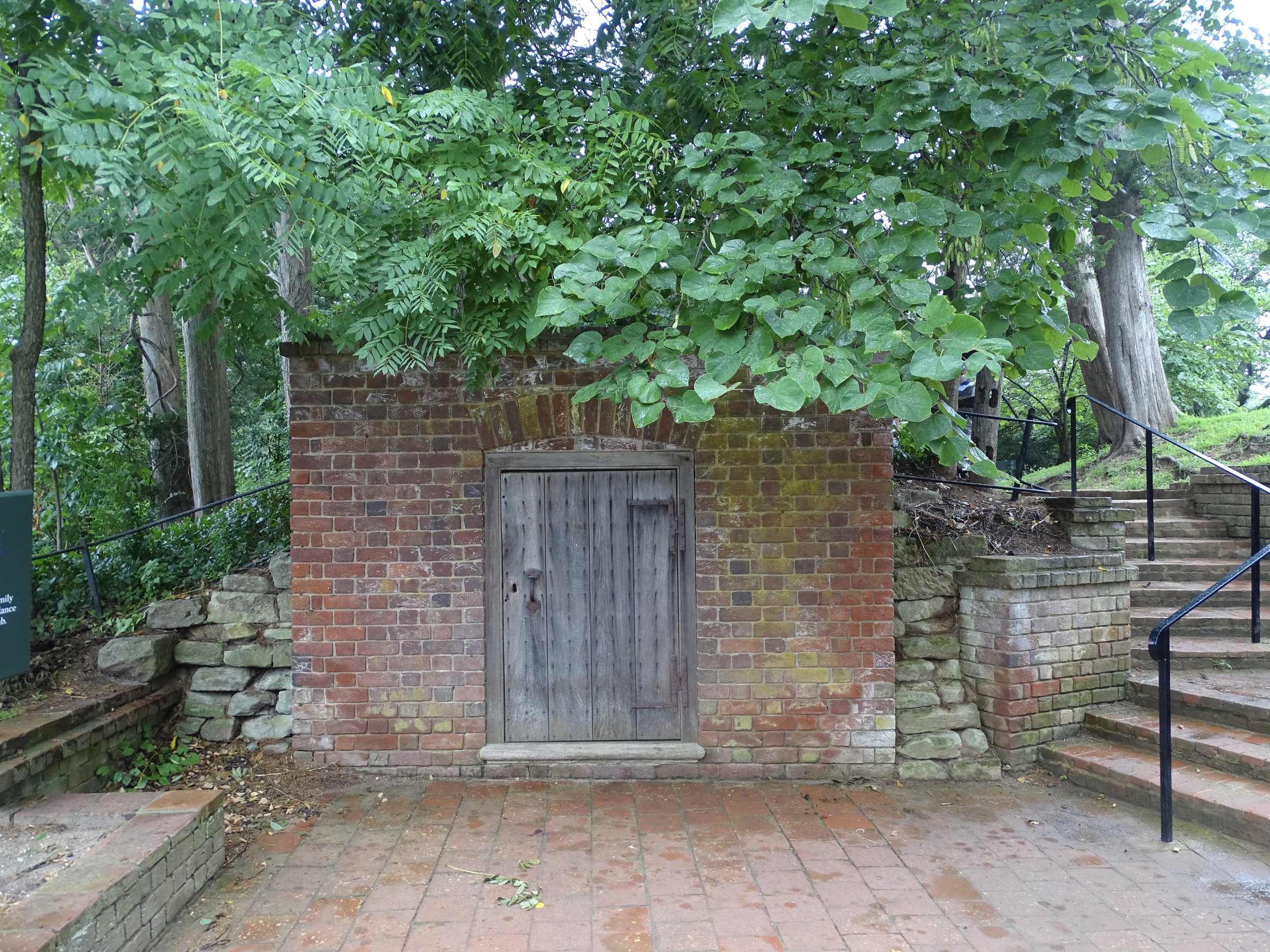 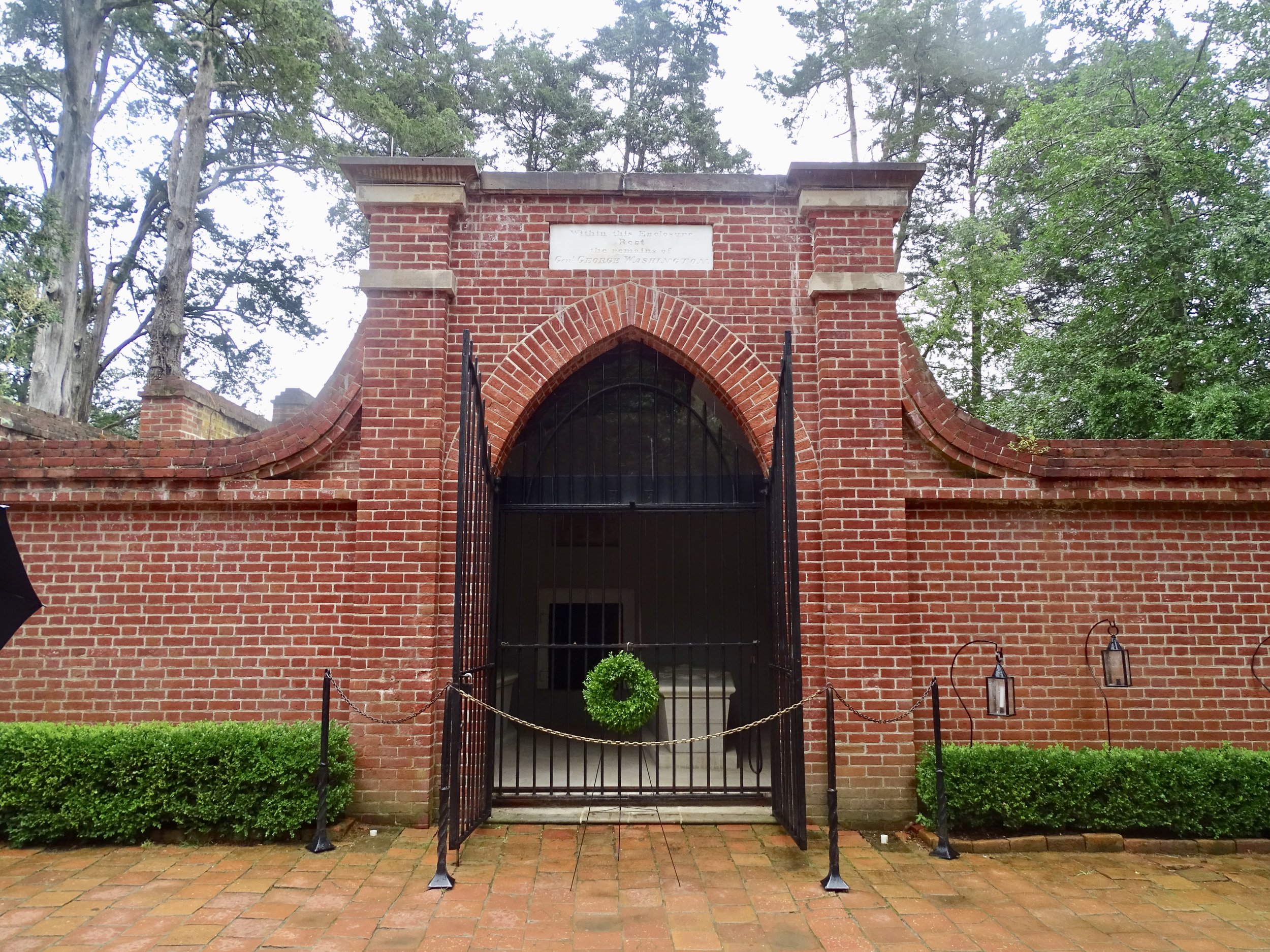 5. Pioneer Farm and various fruit farms: Washington planted  apples, cherries, peaches, and many vegetables, as well as wheat, his most profitable crop. The farm includes animals like sheep and hogs and live interpreters who share personal stories.

6. A 16 sided Innovation Barn used to protect the grain produced from thieves: It was originally built in 1792 and then reconstructed in 1996 to look like the original barn. Washington’s handwritten plans for the barn can be seen in the museum’s collection. Throughout the summer, there are daily demonstrations of wheat treading at the barn.

7. Slave Cabins: Mount Vernon had over 300 enslaved people, most of whom were field workers. An average of 6-8 people lived in one cabin. The cabins were reconstructed based on documents and 19th century photographs.

8. Walking trails– There are several throughout the complex. Children will most enjoy the Forest Trail, which should take about fifteen minutes to travel between Pioneer Farm and the Education Center. There are some steeper inclines so make sure to walk carefully and wear sneakers. 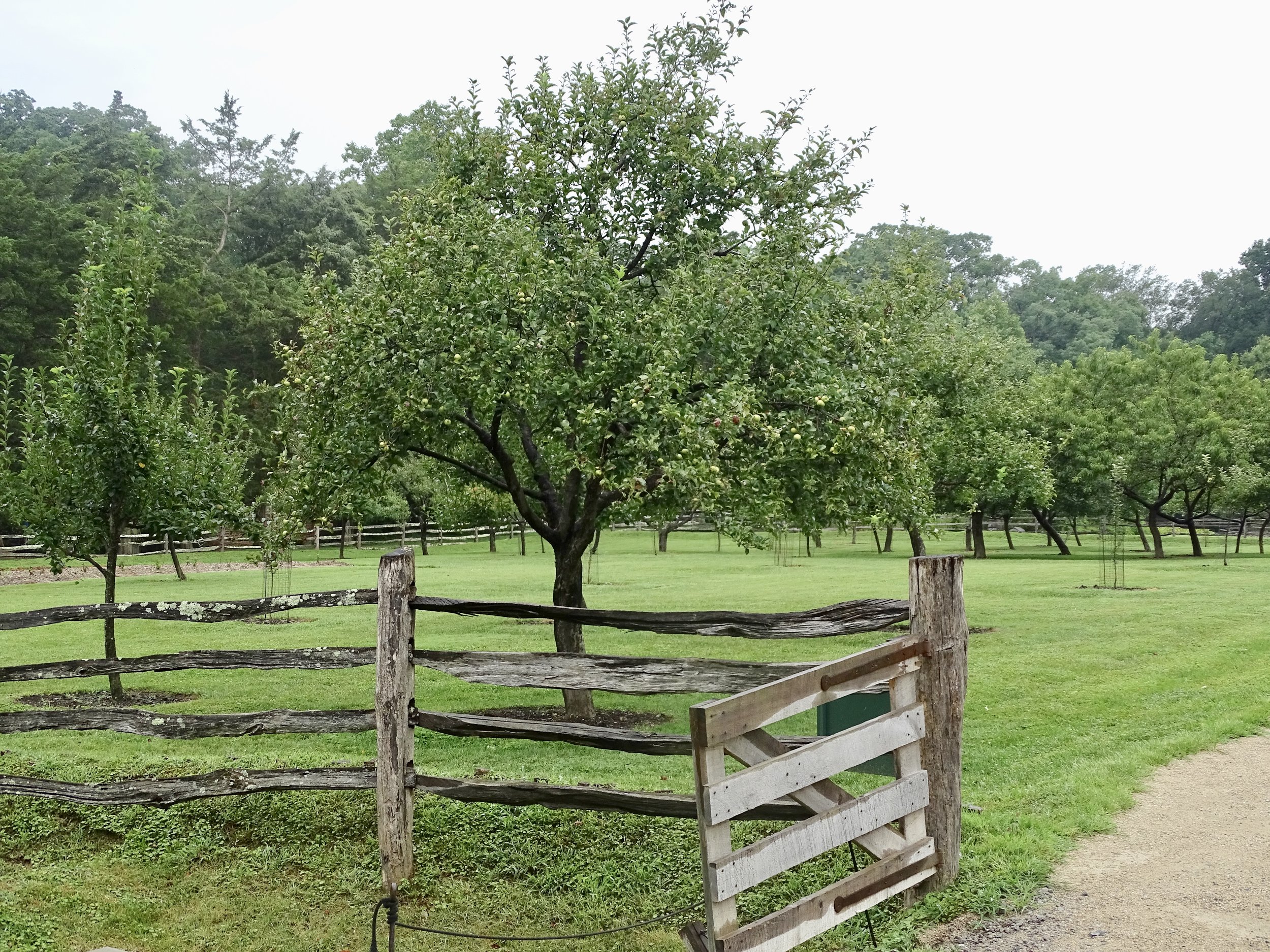 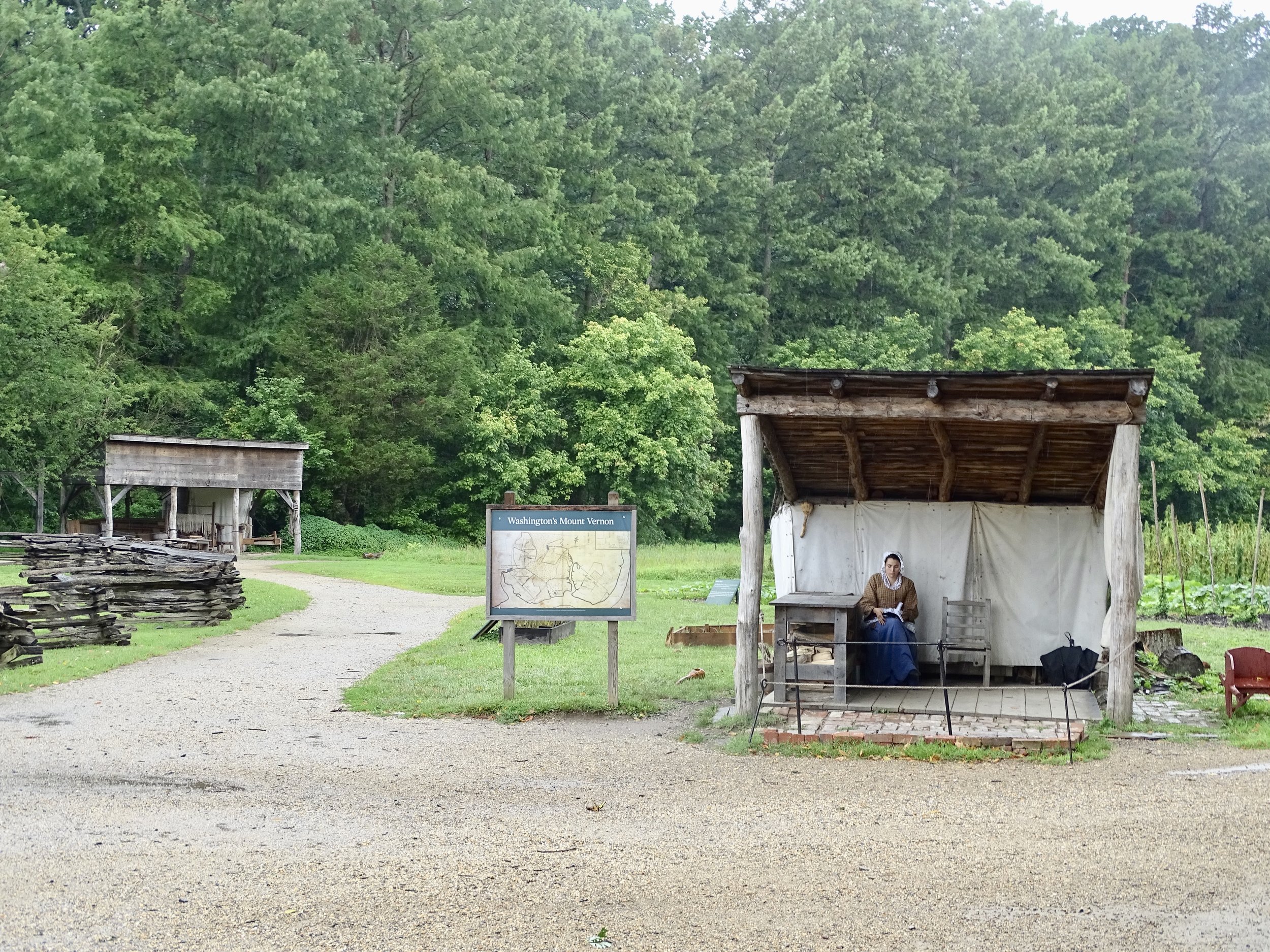 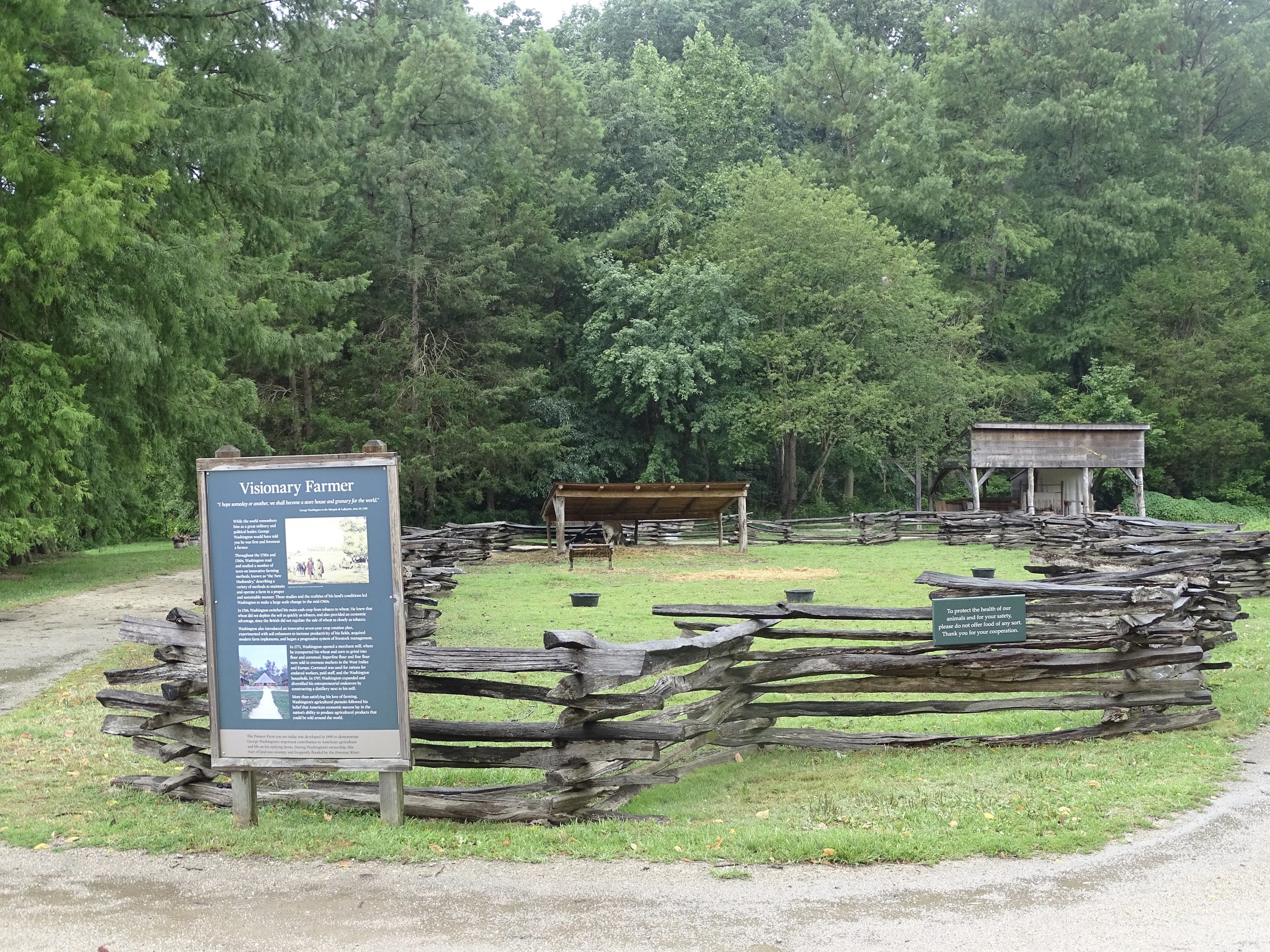 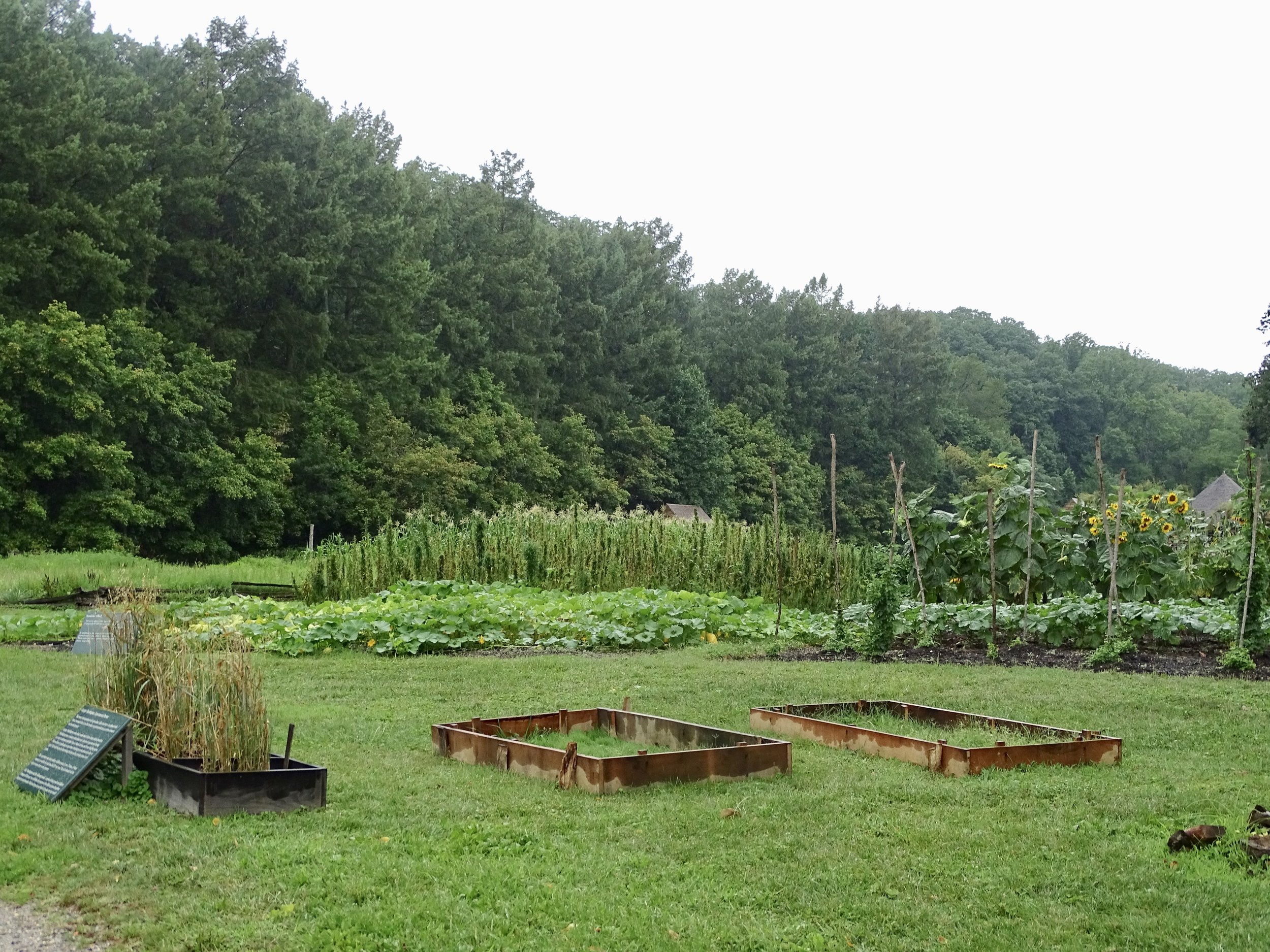 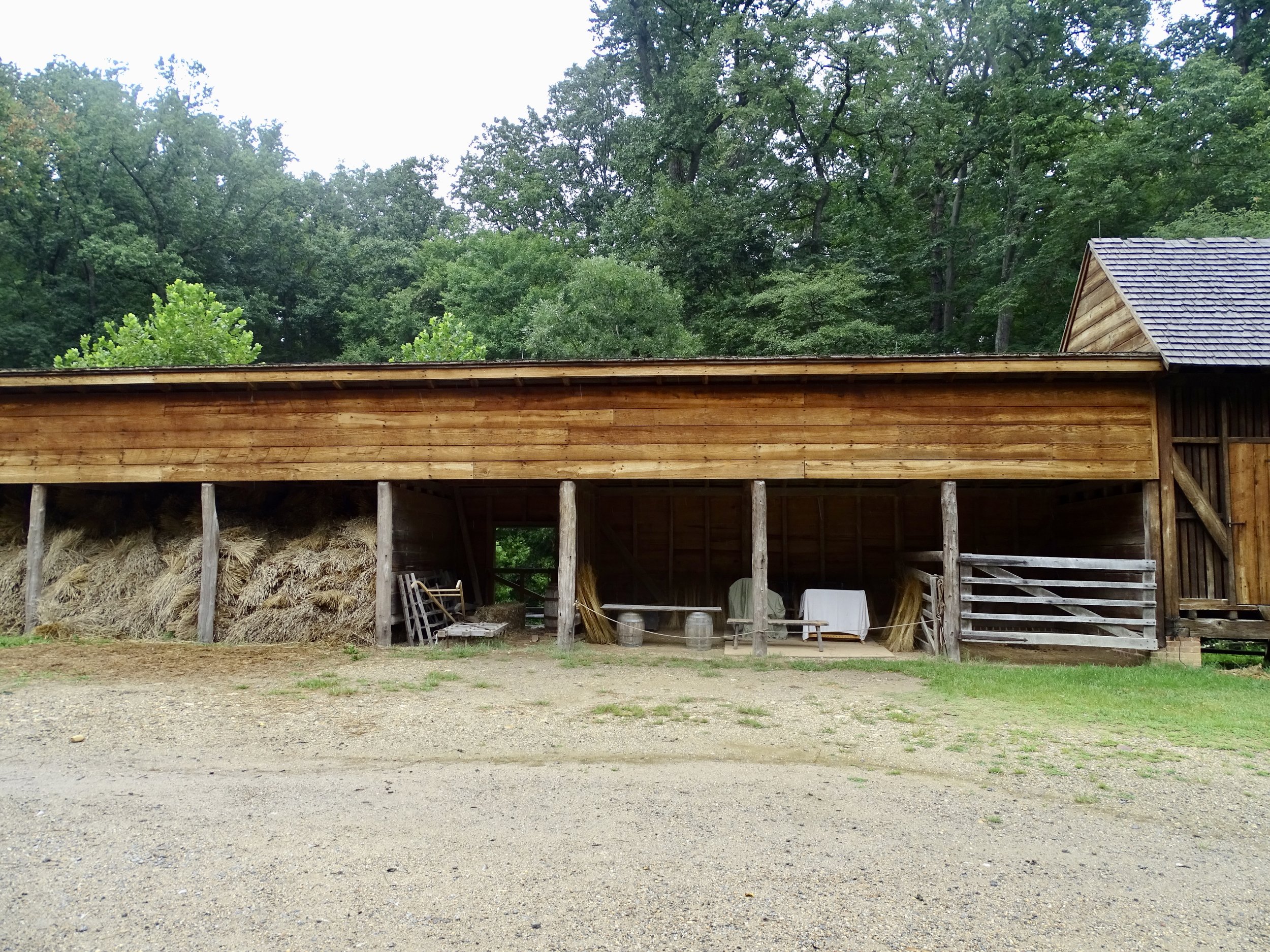 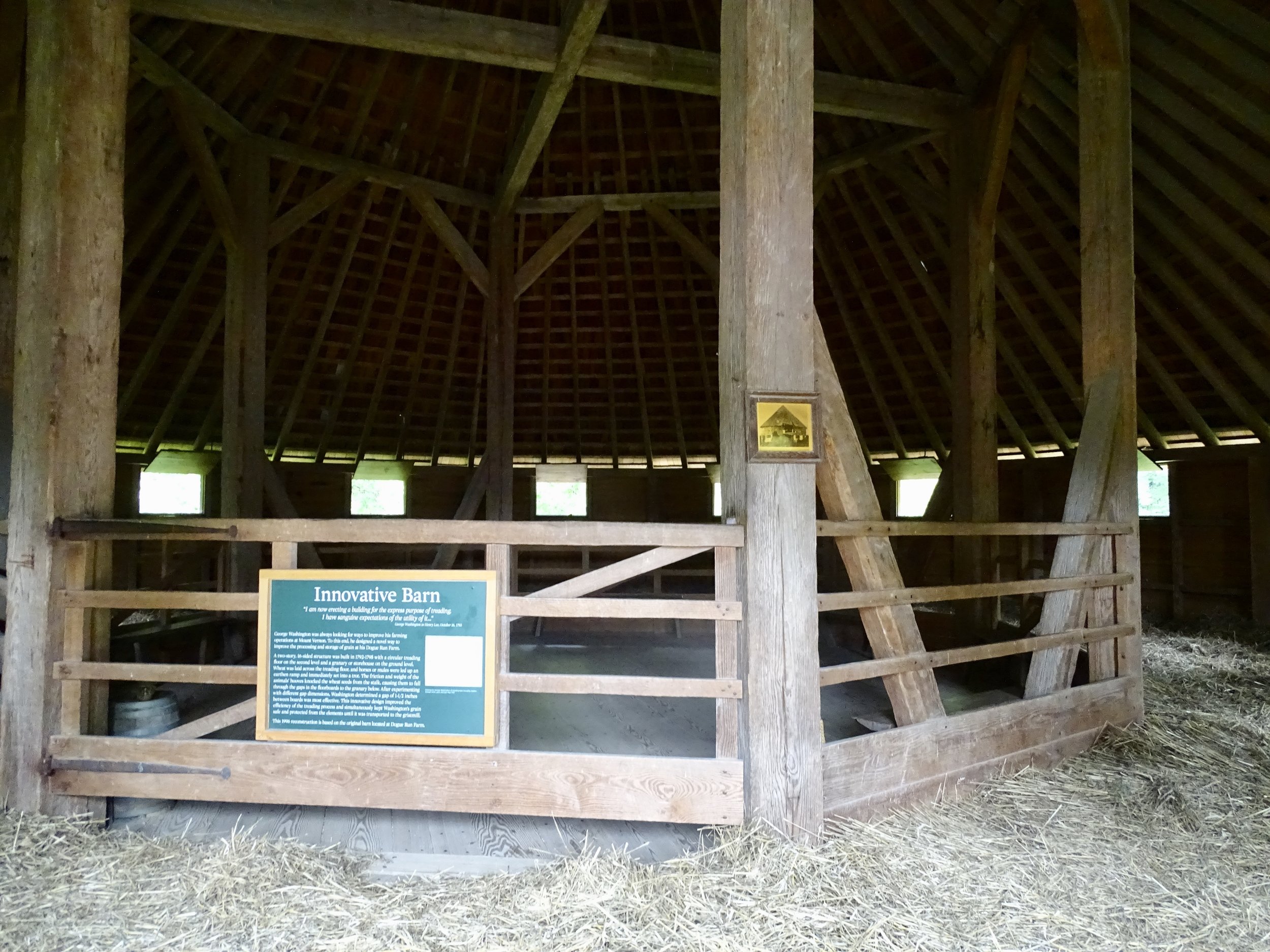 9. Reynolds Museum: It includes 500 original objects and documents in seven galleries of history. There are tons of interactive touch screens with information about the artifacts and Washington family. Note: photos are not allowed in most of the museum. Children will be especially interested in: 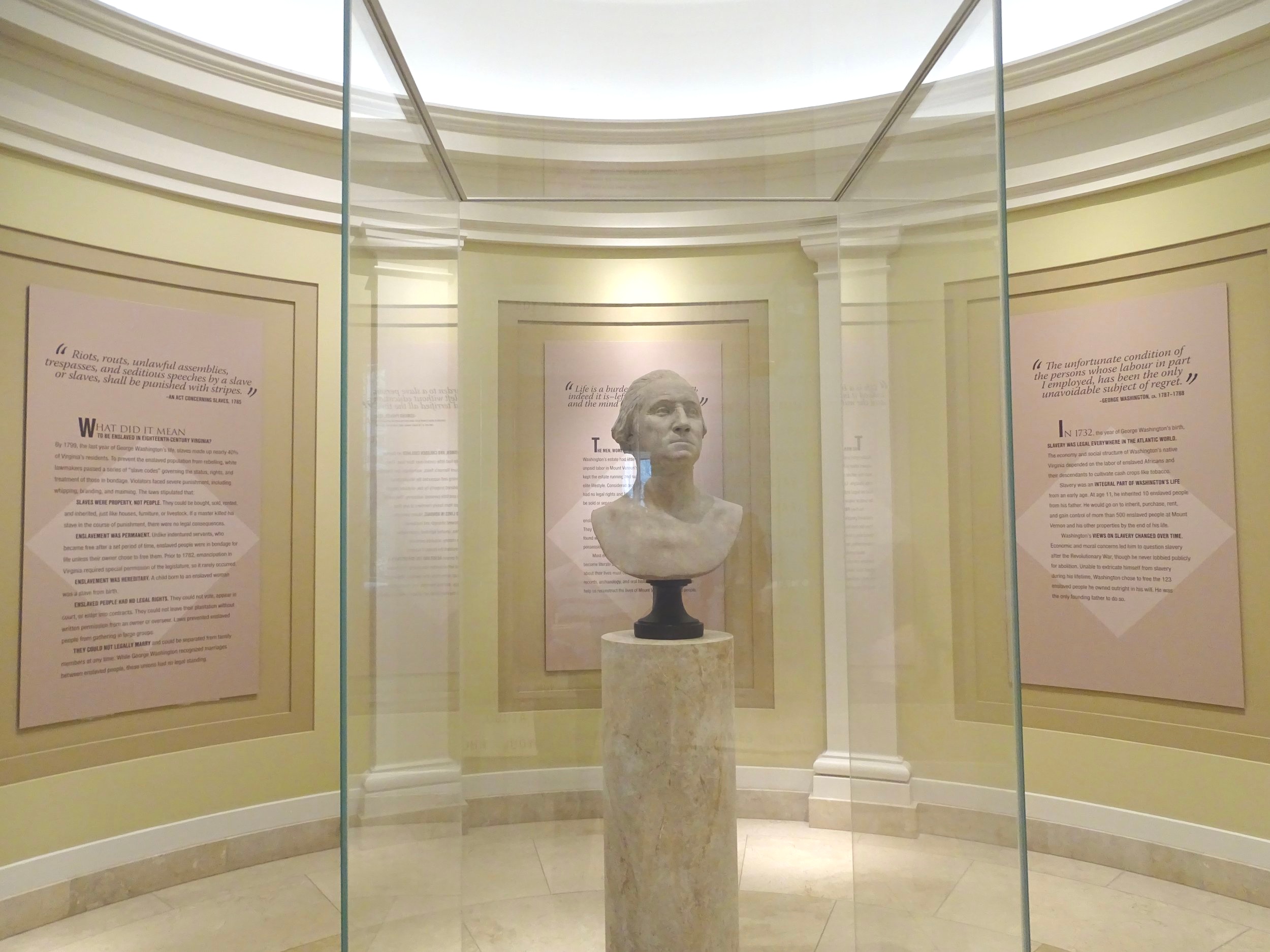 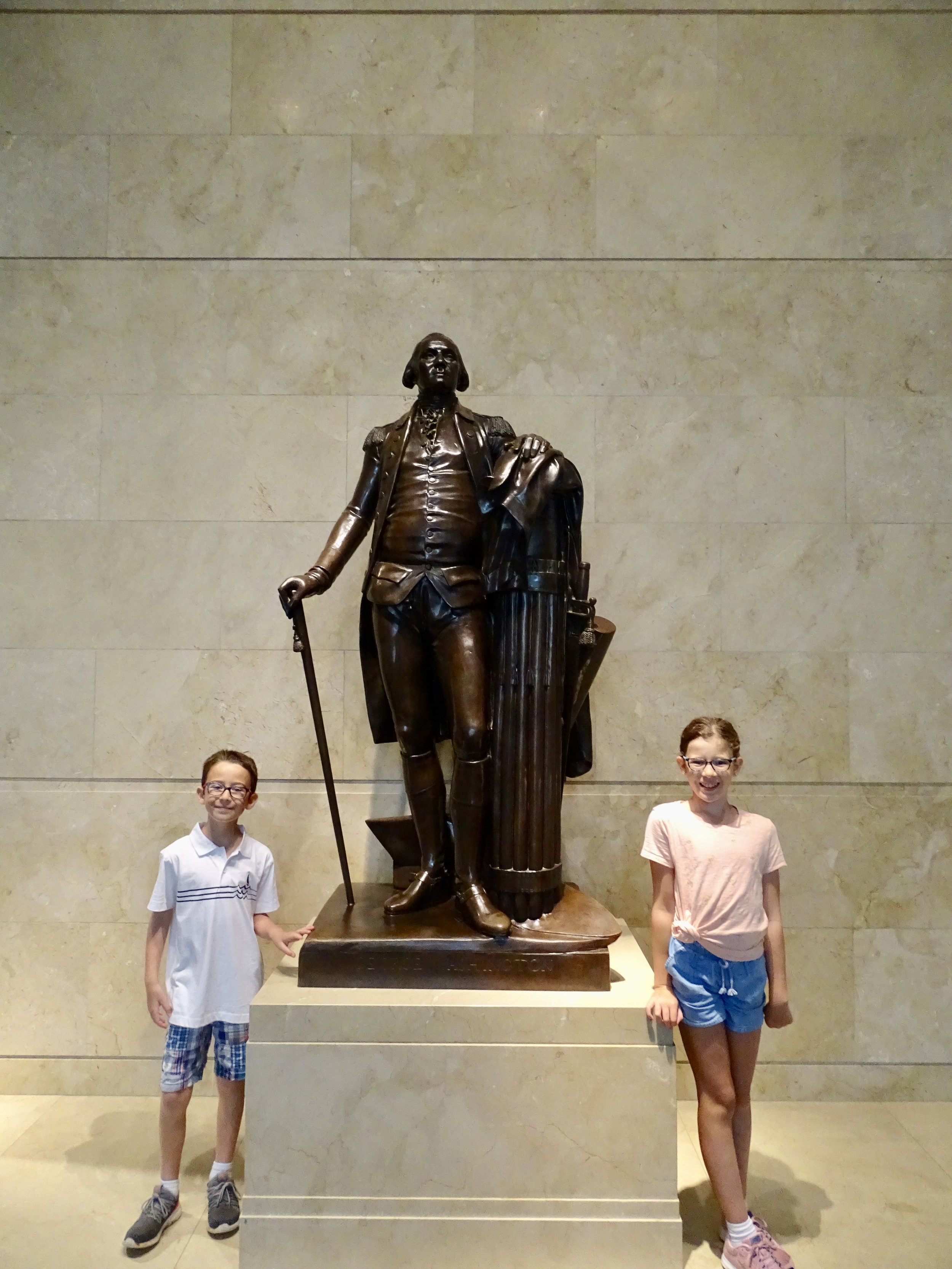 10. Education Center: A very popular spot which has 15 immersive, multimedia galleries and three theater experiences. This will surely be the place children linger the longest. There are so many engaging ways for children to learn about Washington’s beliefs, battles, and the birth of America. Some of our favorite exhibits include: 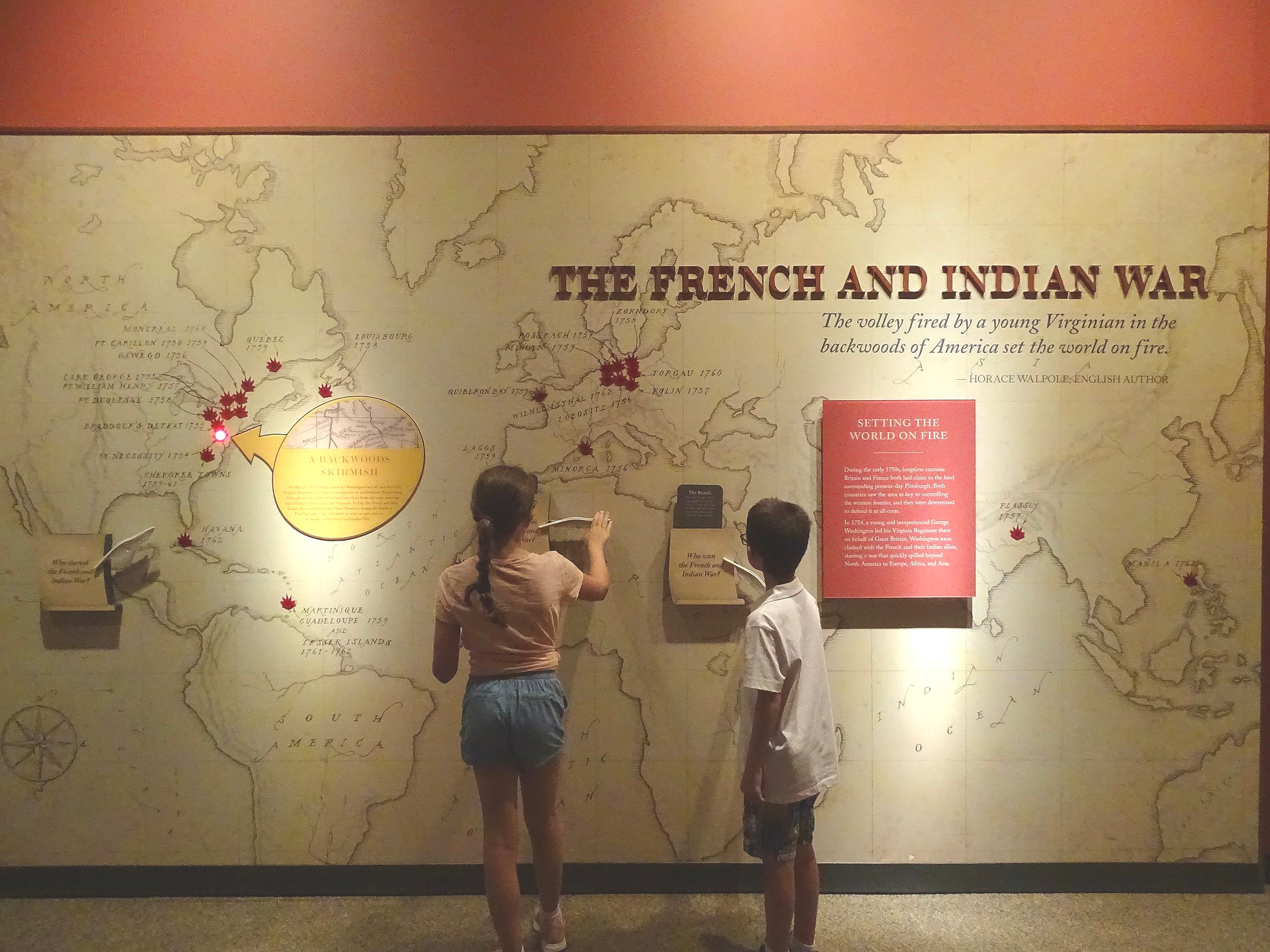 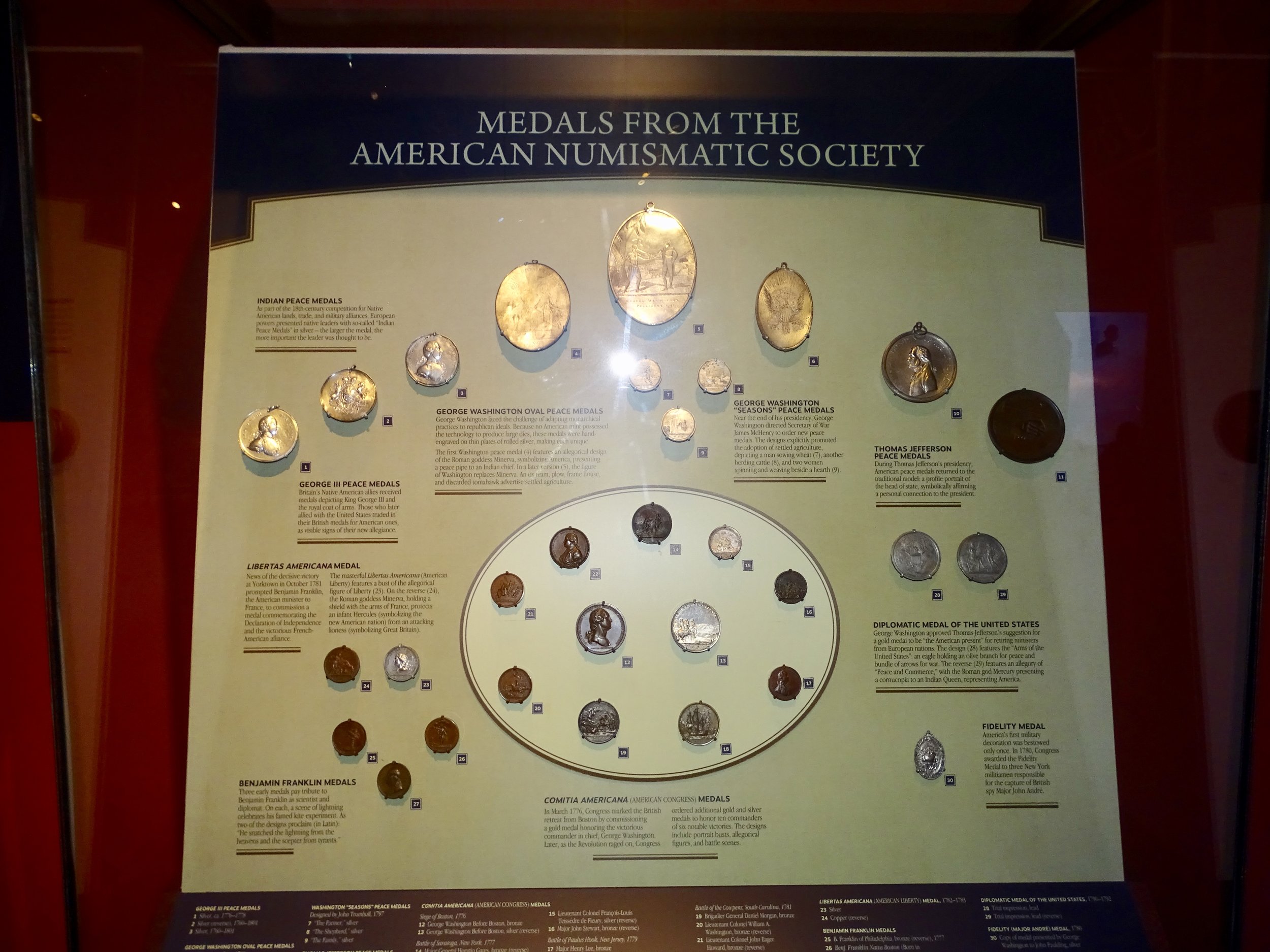 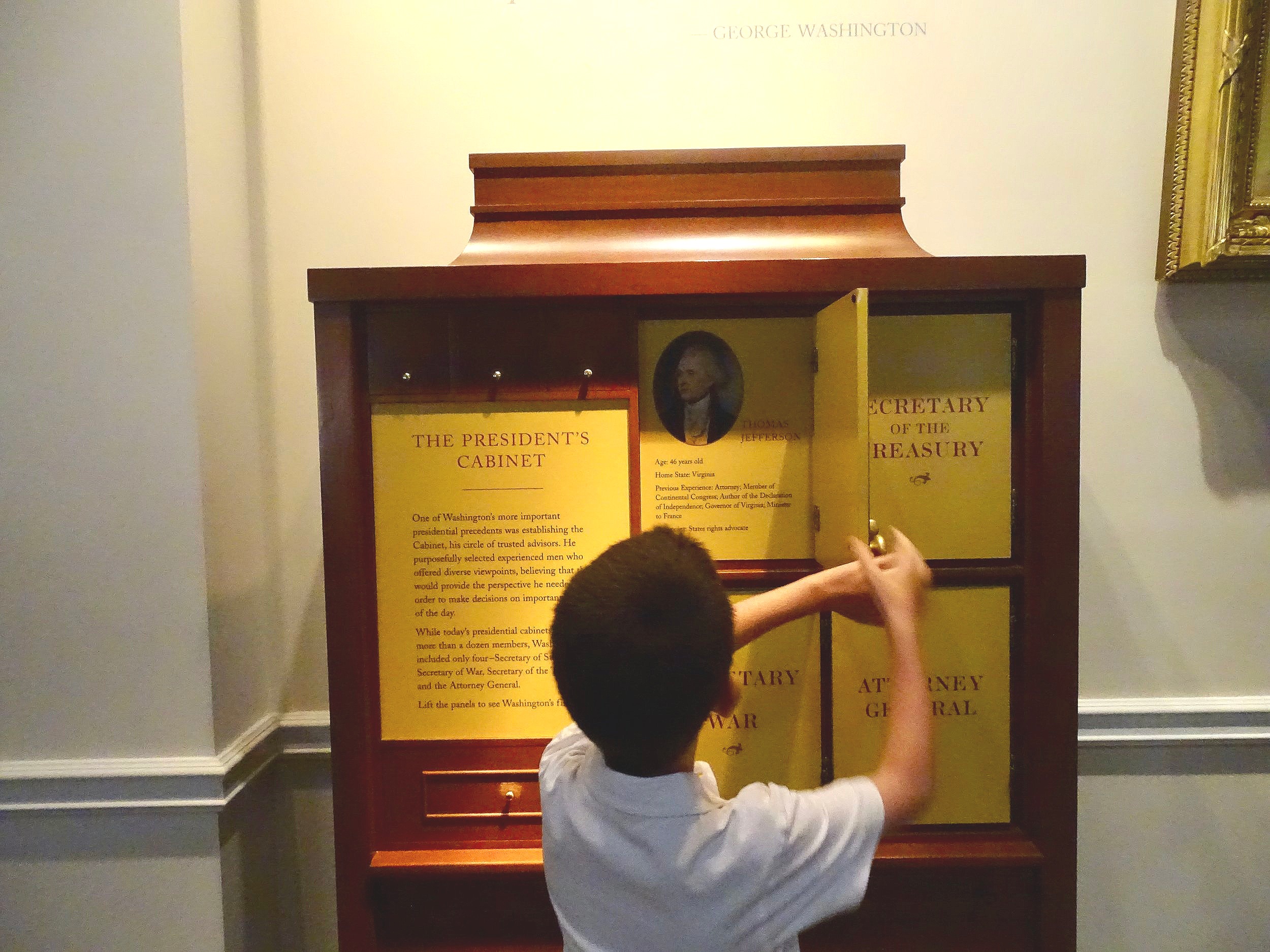 Other areas of interest:  We didn’t find these areas relevant for our children but other guests might enjoy:

Eating at Mount Vernon: The Mount Vernon Inn Restaurant opens each day at 11am and offers lunch and dinner. The menu has a wide variety of options and extensive wine list. The kids menu has great choices, too! There is also a food court which offers faster service for breakfast and lunch items and is a peanut free facility- check here for the menu.

And for more spots for presidential fun, check out some of our posts here.

Disclosure: My family was given a media pass to visit Mount Vernon. All opinions expressed are my own.

One of the most popular living history museums in America, Jamestown Settlement tells the story of the first permanent English settlement in 1607 and the cultures that converged there. It originally opened as a museum in 1957 and was expanded in 2007, in commemoration of its Quadricentennial. Named in honor of King James I of England, the complex includes immersive indoor and outdoor exhibits, and daily interactive demonstrations.

This post is the first in a series we’ll be sharing about our adventures of summer 2021, when we embarked on a 4 week road trip that included 9 National Parks (bringing our total to 12) and many other cool sites across the country. We must disclose that we are NOT serious hikers, even after this trip. The pandemic afforded our family the opportunity to enjoy the outdoors more, and that let to a whole new appreciation of nature. While we researched, experienced, and fact checked all information in this post, many parts of it are still only our personal opinions (how difficult a trail is, how long it takes to complete, what we chose to do and not do). We’ve provided links to the NPS site so our readers can make their own decisions about what adventures they want to experience in the park.

We visited Busch Gardens Williamsburg in August of 2019. I saved the following post, hoping to share it at the start of the 2020 season. Unfortunately, the COVID 19 pandemic hit and I didn’t feel it appropriate to post when the amusement park was closed. Busch Gardens is scheduled to open in late July and I am sharing the following observations and tips for families choosing to visit the park this summer. I also believe most of these tips will be relevant in future years as well. For the latest updates on Busch Gardens Williamsburg’s schedule check here and for updates on regulations, check here.

Busch Gardens Williamsburg is an almost 400 aces amusement park in James City County, near the popular “Historic Triangle” of Jamestown, Yorktown, and Williamsburg. The complex is organized by European countries and includes over 50 rides, with 9 rollercoasters and 3 water rides, and plenty of family fun. The park is closed in January, February, and parts of March, with select hours and dates for early spring and later fall. Check the full calendar here. On a research trip to Busch Gardens, I learned quite a few tips for saving time and money and for maximizing family fun while visiting the park.

Pennsylvania is a big state- over 46,000 square miles, over 12 million people, and several popular cities. I remember the first time my husband and I, pre-children, drove a lengthy part of Interstate 76 to get to Pittsburgh (one of the first baseball parks we visited); it felt like the road went on forever. Many years later, we have travelled through most of Pennsylvania (and traveling 330 miles in one day is now a breeze- our record is 710 miles in one day!) and found a lot of spots we love! Although there are many more places we have yet to visit, here are our top 10 family friendly spots in Pennsylvania:

Celebrating its 150th birthday in 2020, the Museum of Fine Arts in Boston, Massachusetts is the 5th largest art museum in America. The museum owns over 450,000 pieces of art in its collection, which includes paintings, photography, prints, drawing, musical instruments, textiles, and jewelry.

The major impetus for the road trips my family has become known for is our love of baseball. To date, we’ve seen 22 of the 30 Major League baseball parks and we’re on track to visit two more in 2018. We love baseball. So when we planned a trip to visit friends near Utica, New York we decided to make a short detour to visit the village of Cooperstown, New York, home of the National Baseball Hall of Fame and Museum. Independently owned, the National Baseball Hall of Fame elected its first class in 1936 and the original Hall of Fame (which sits on the property of the current museum) opened in 1939. It was built in Cooperstown because of a now debunked theory that Abner Doubelday invented the sport in Cooperstown in 1839.

The museum is quite popular, welcoming about 275,000 visitors each year; on a typical summer day, the museum sees over 2,000 visitors. Many nearby attractions are only open in season (in April-May and September-October with limited hours, and full time June-August), which would make a summer visit appealing. However, if you really want to linger and get up close to every display and plaque in the Hall of Fame (and still have lots of lodging and restaurant choices), come in the quiet off season. I imagine mid and late October would be especially beautiful with the foliage.