Located in downtown Boston, on the south side of Beacon Hill and overlooking the Boston Common and Back Bay, the Massachusetts State House was constructed in 1798 and served as the state house until the mid 1880s. The land where the capitol was built was donated by John Hancock, the first elected governor of Massachusetts and the building remains the oldest on Beacon Hill. The complex covers almost seven acres- two city blocks. Paul Revere covered the (then wooden) dome in copper in 1802. Years later, in 1874, when it had turned green from rust, it was covered in gold. Now, every 30 years, the dome has to be recovered in gold. Note the pinecone at the top of the dome, commemorating the timber industry of Massachusetts. 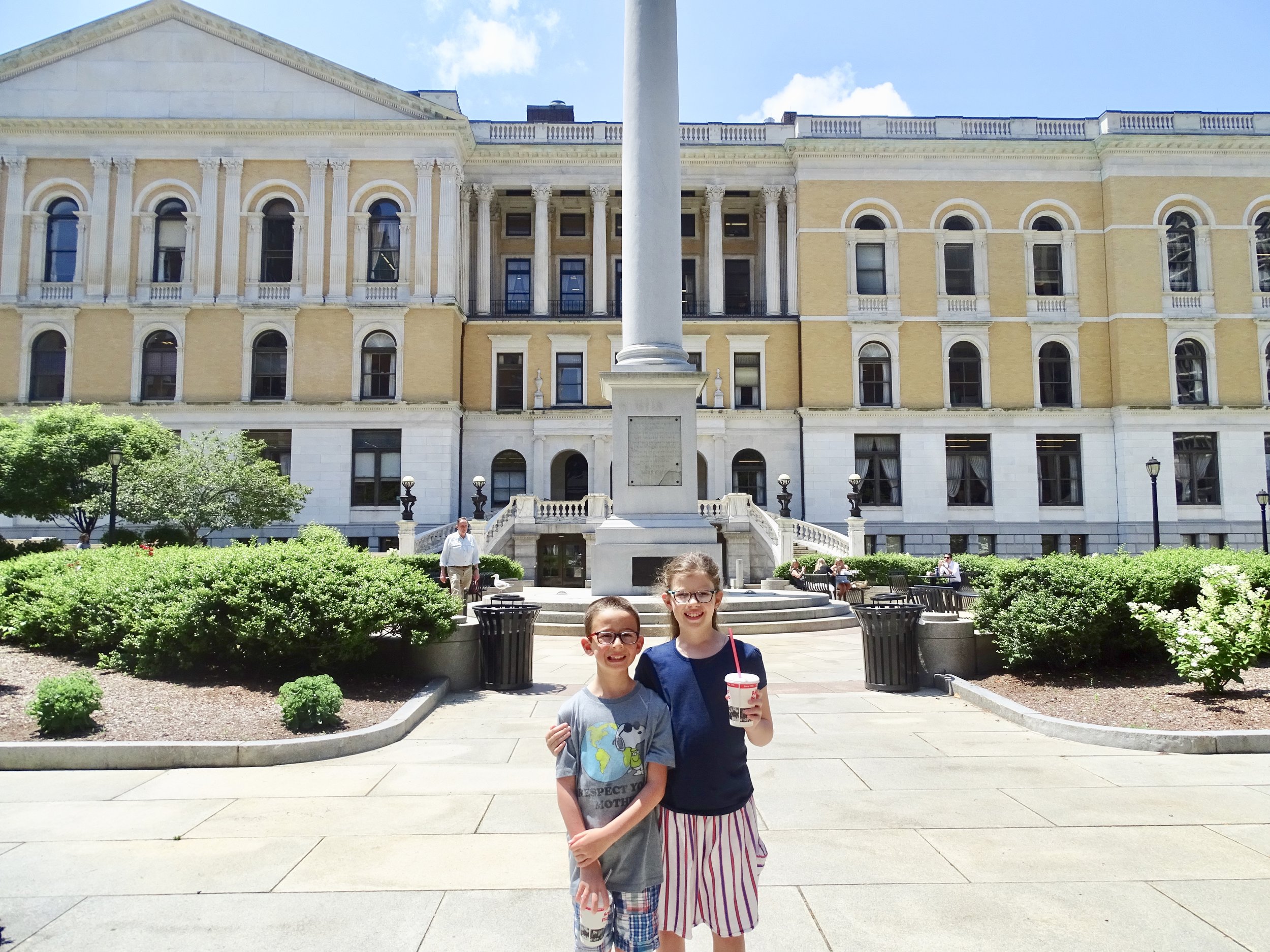 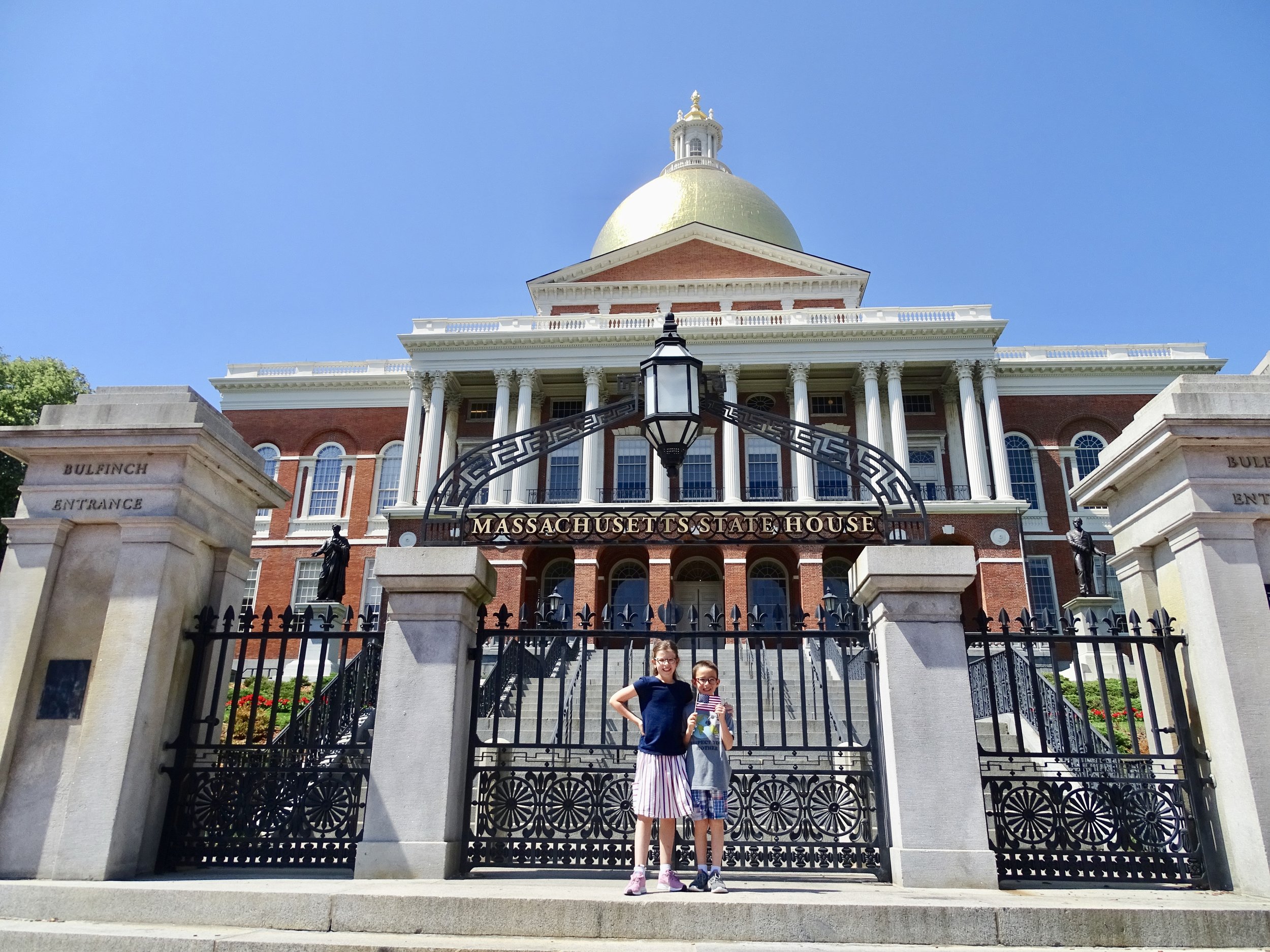 1. Doric Hall which used to be the main entrance to the State House and now serves as a museum and meeting spot for tours. Be sure to check out: 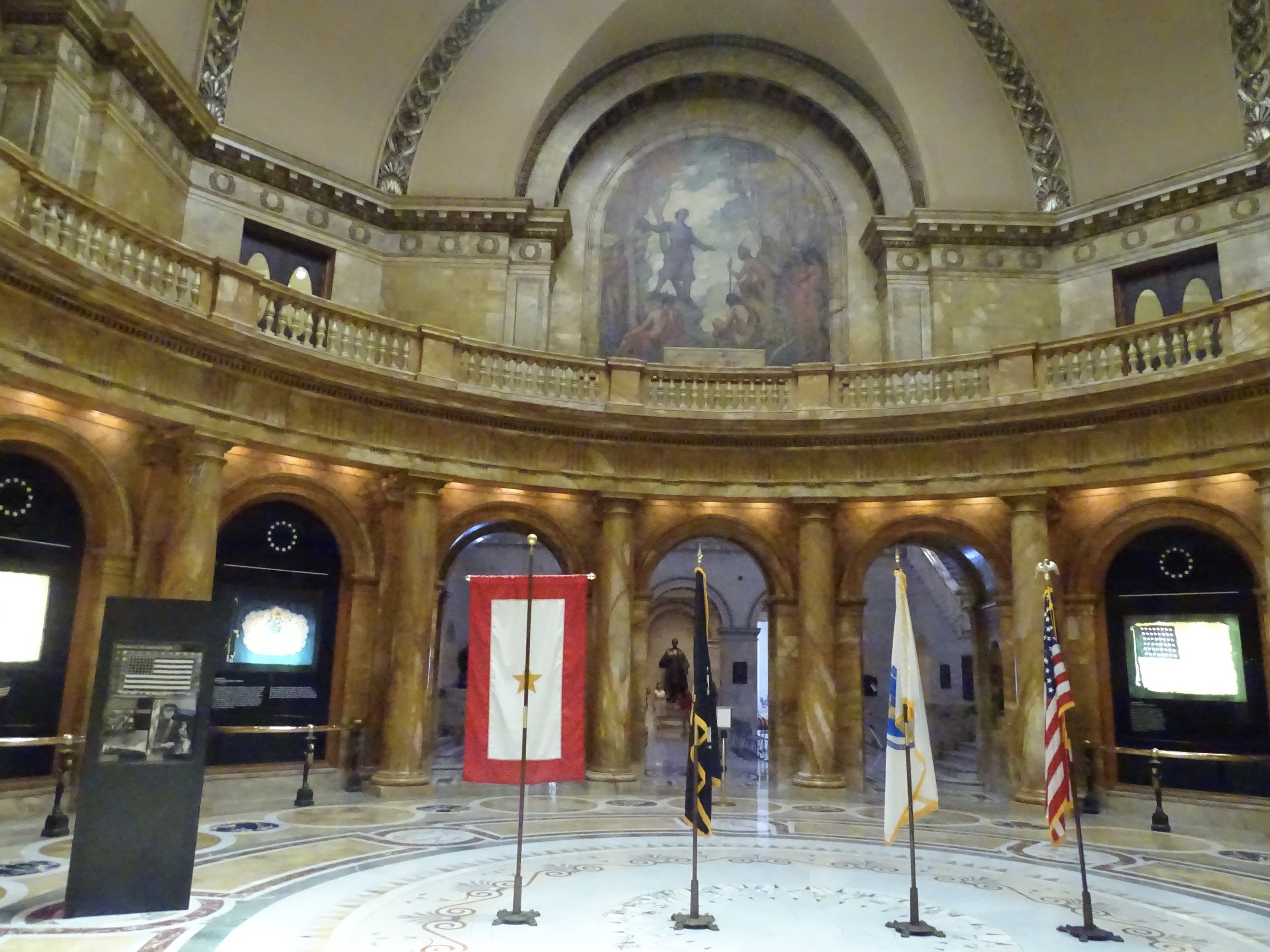 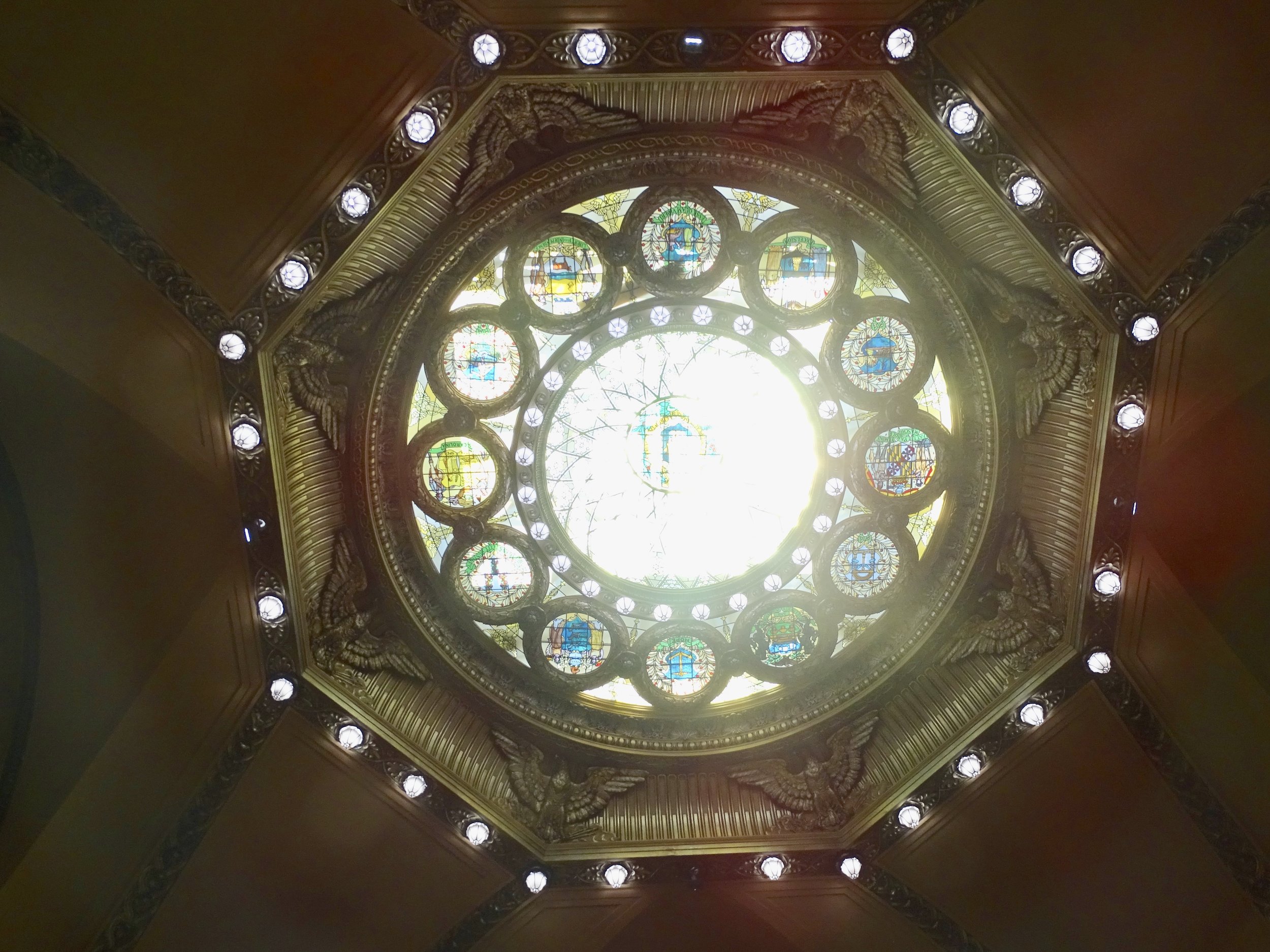 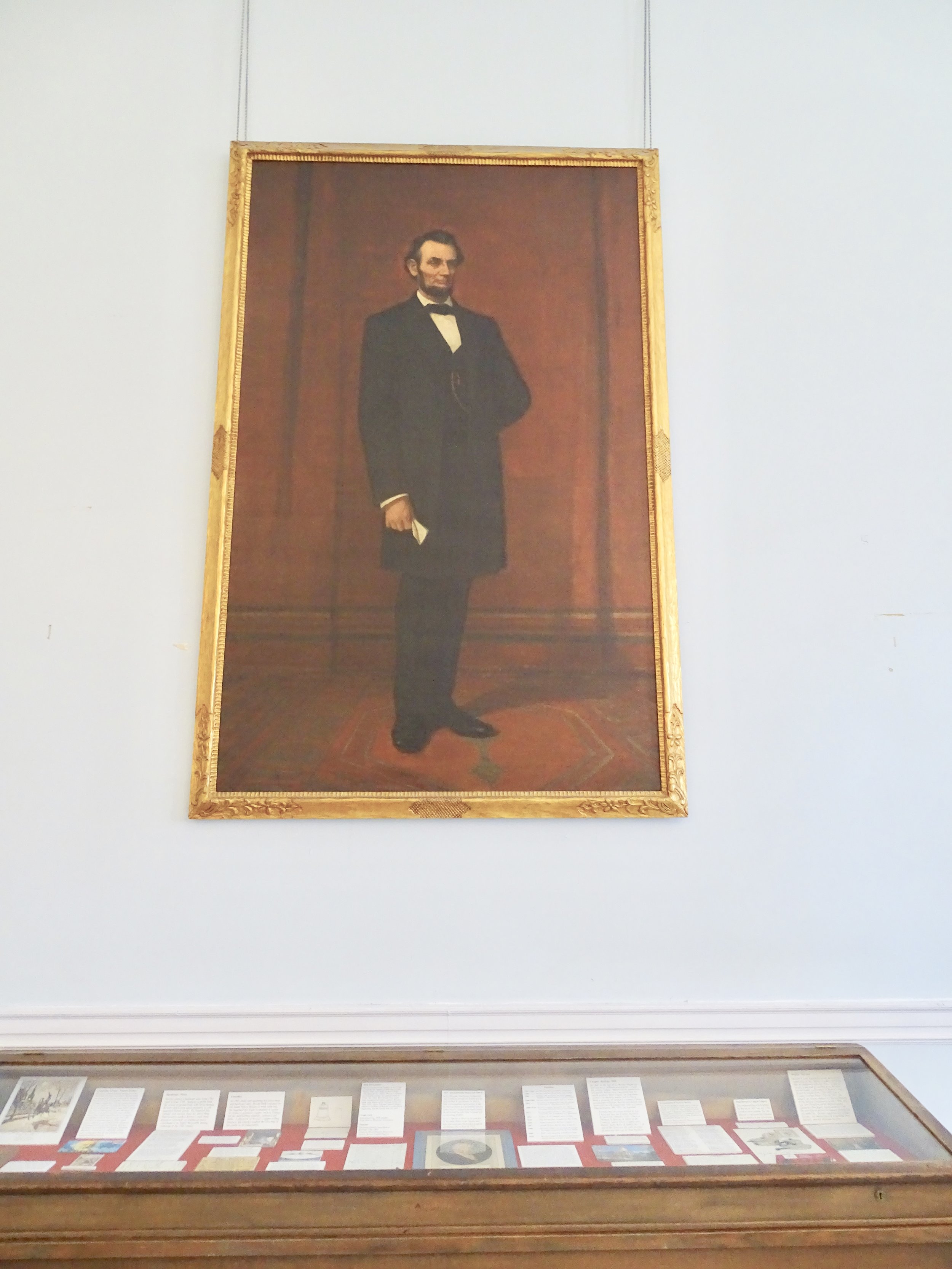 2. Nurses Hall, one of the first additions to the State House, which honors the role of nurses in American society. Be sure to check out: 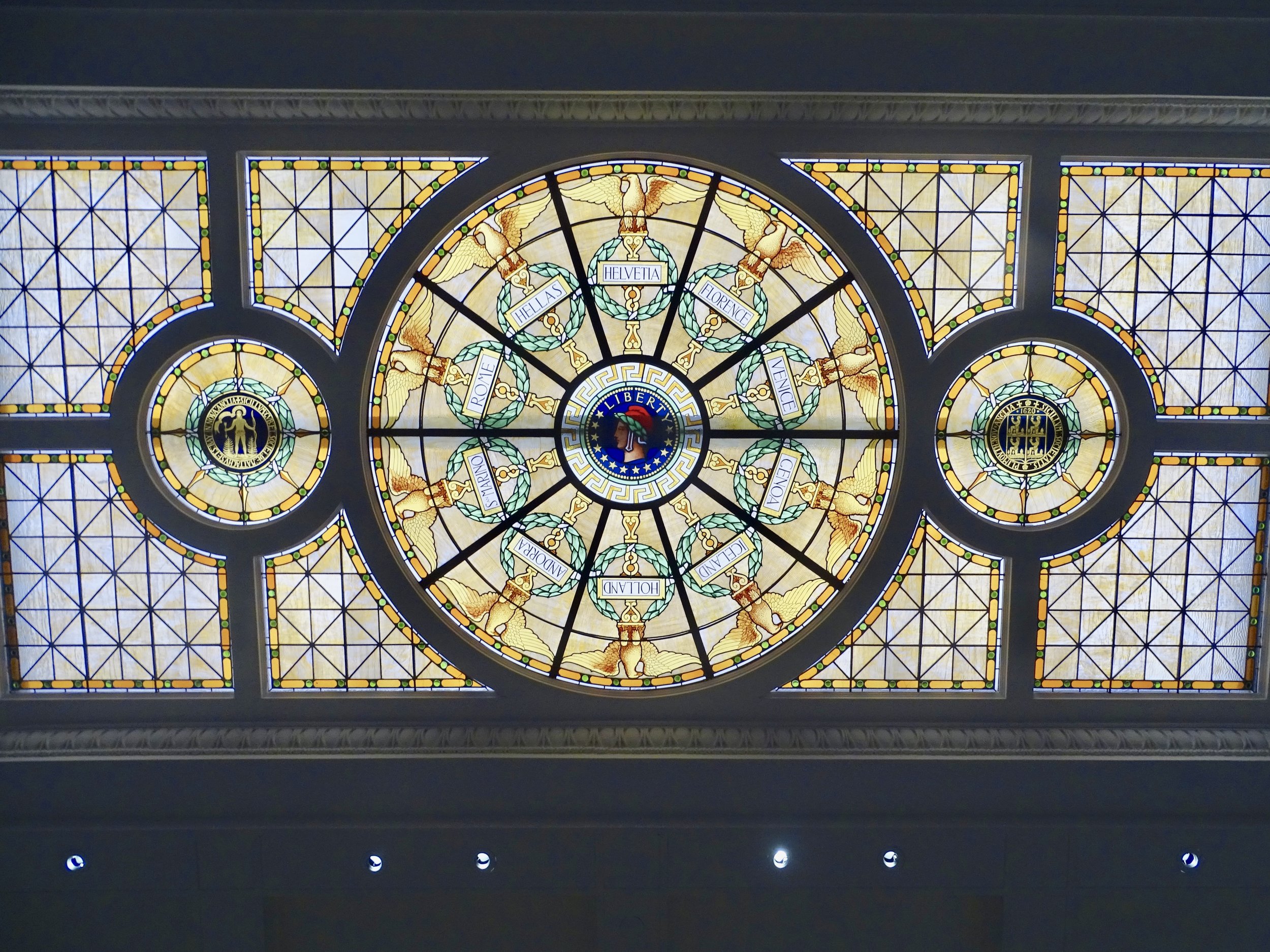 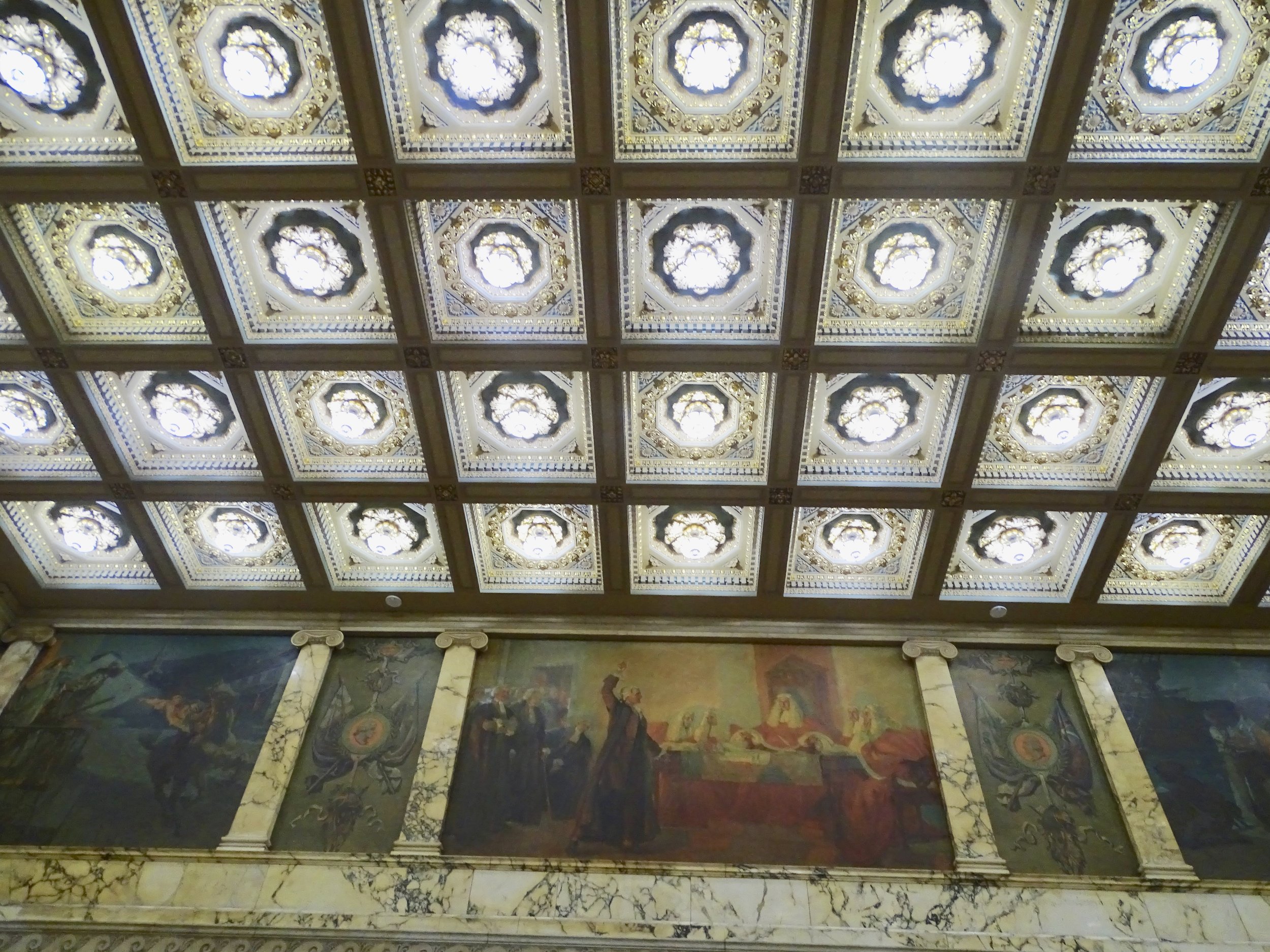 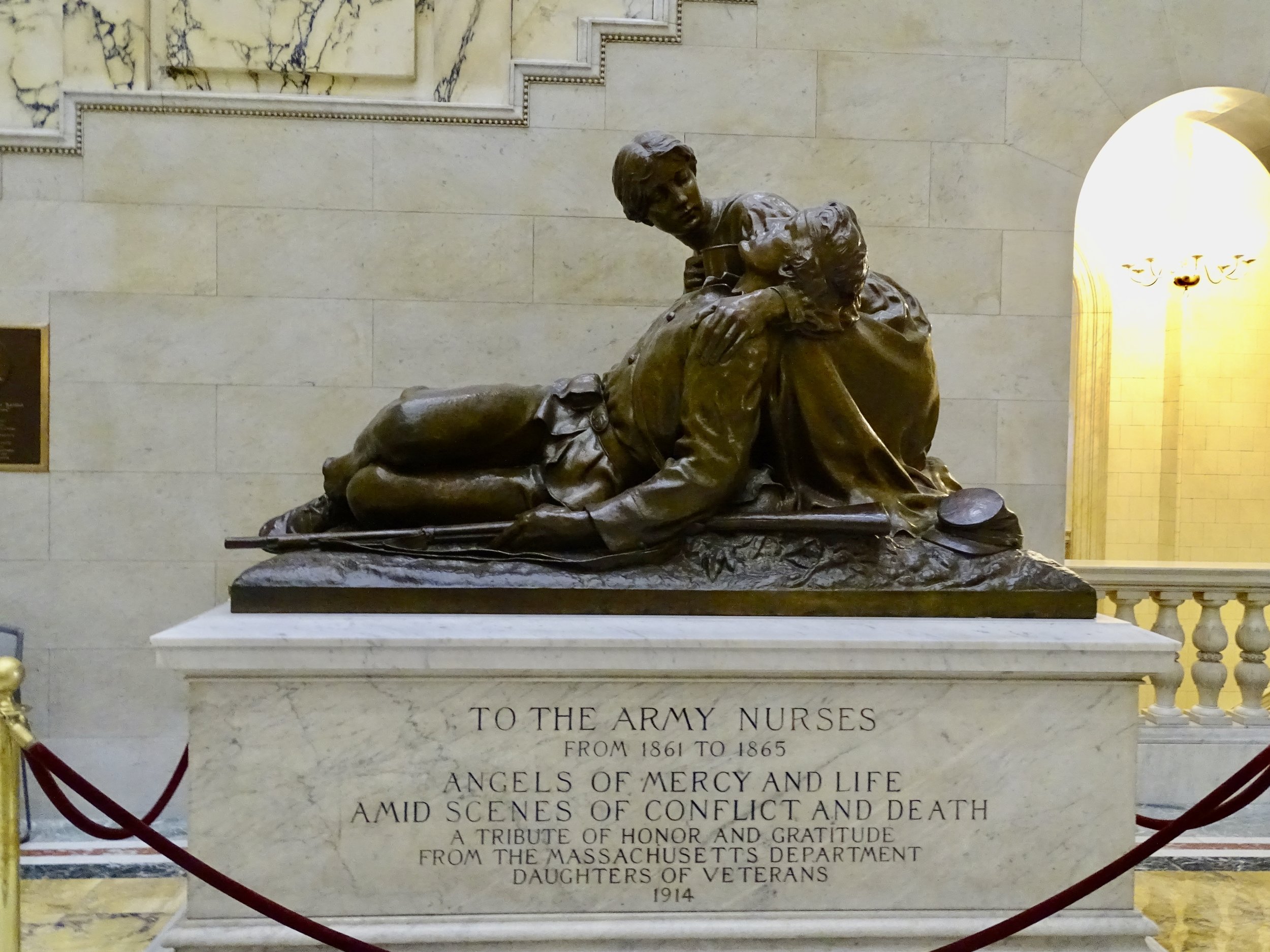 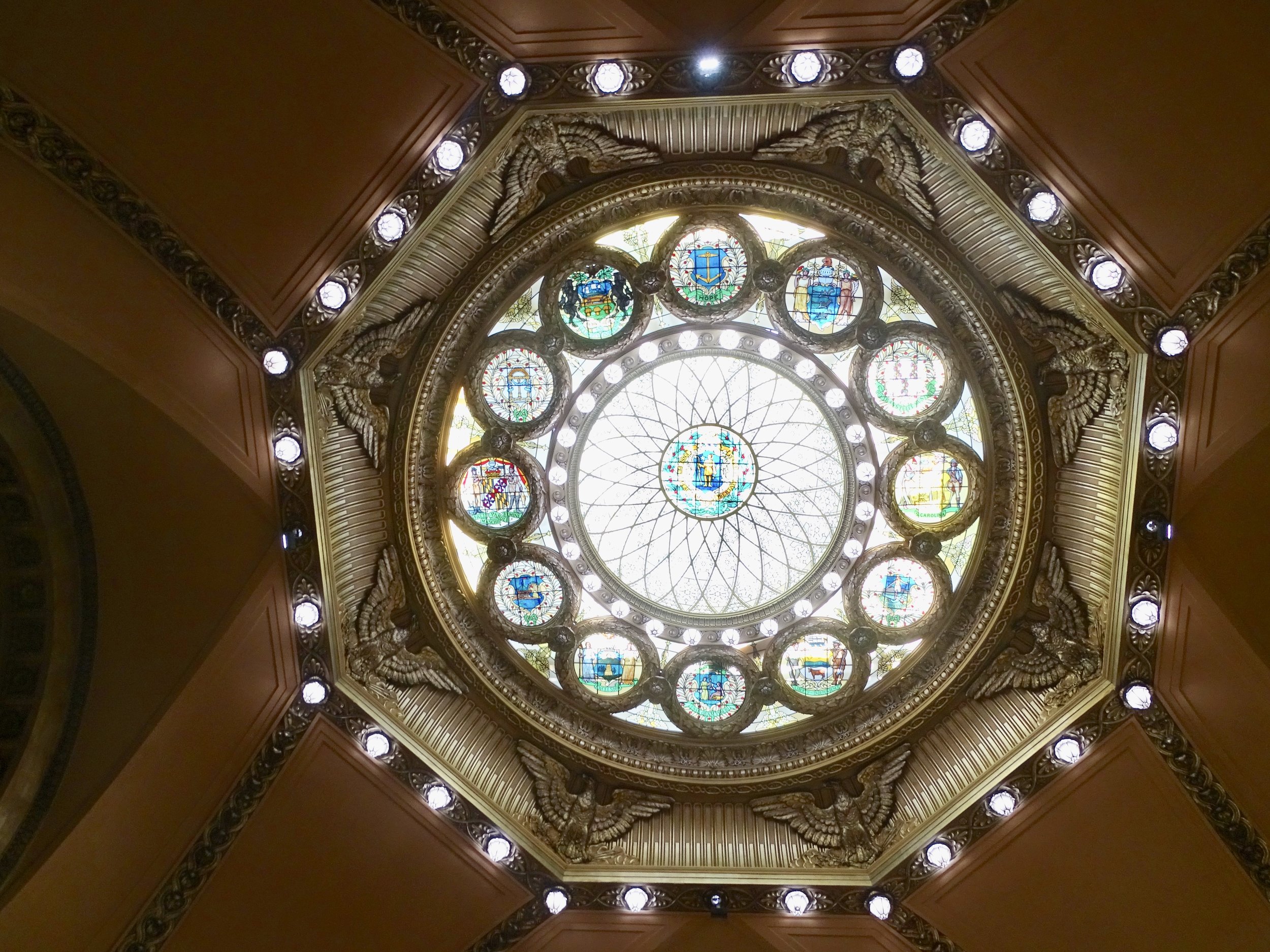 3. The Great Hall , which was originally used as an outdoor courtyard. Massachusetts is one of only a few states that does not have a governor’s mansion and nor a place to hold large, public receptions. In 1990, Governor Dukakis ordered that the courtyard be enclosed so that it could be used to host large functions. Be sure to check out: 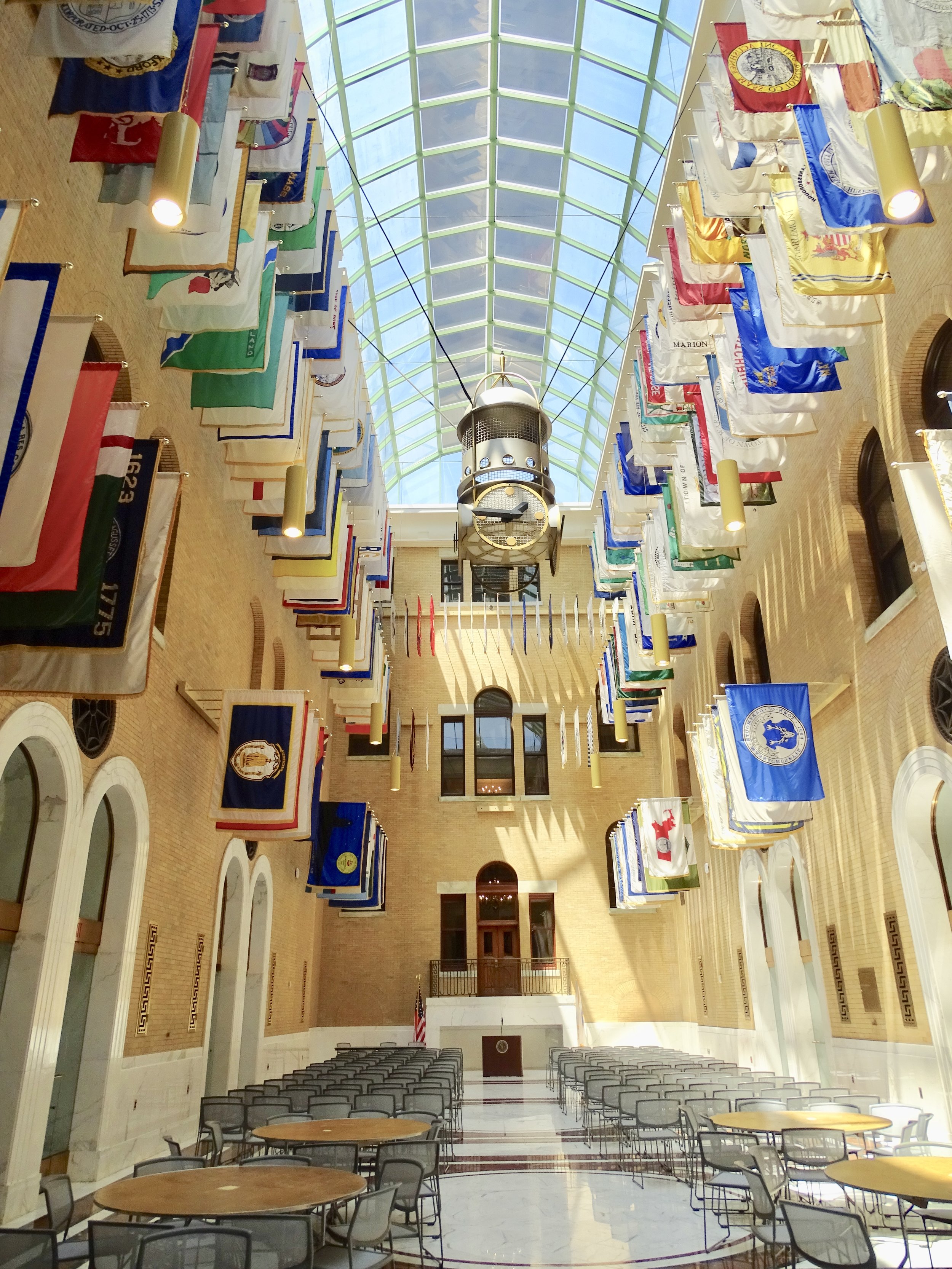 4. Memorial Hall, known as the Hall of Flags, honors Massachusetts Soldiers from every major war, from the Spanish American War to the Vietnam War. The Italian marbled room includes: 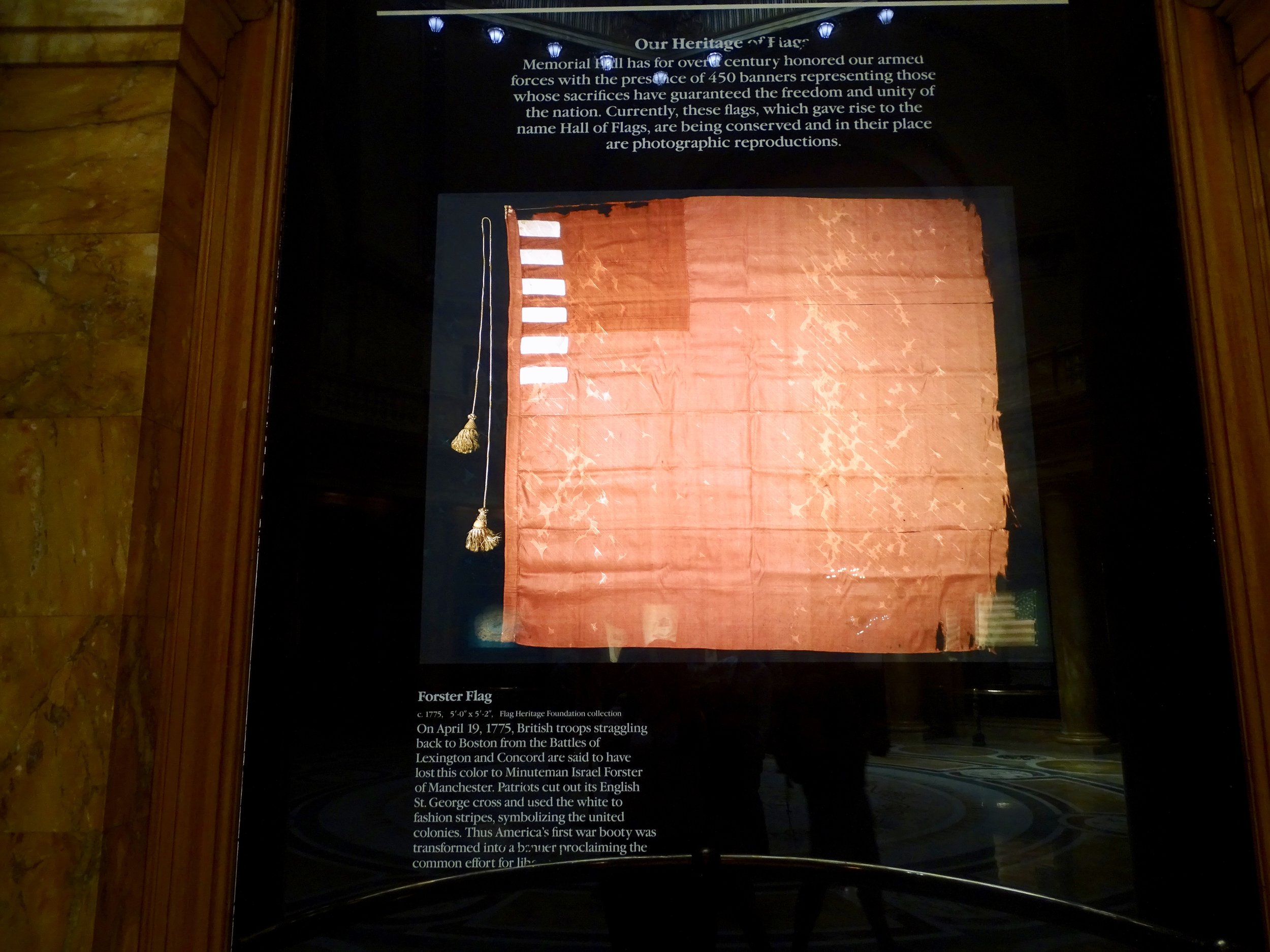 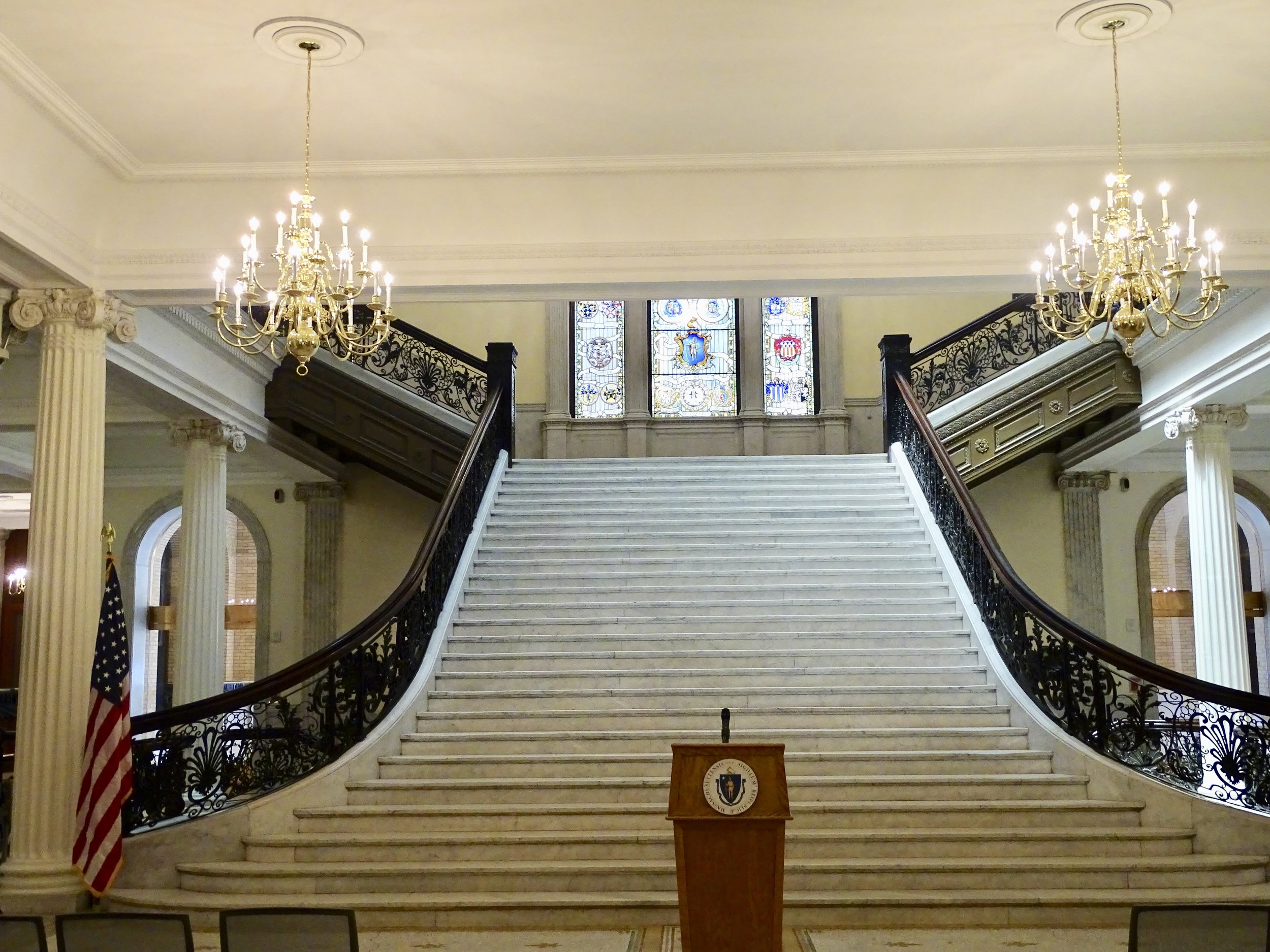 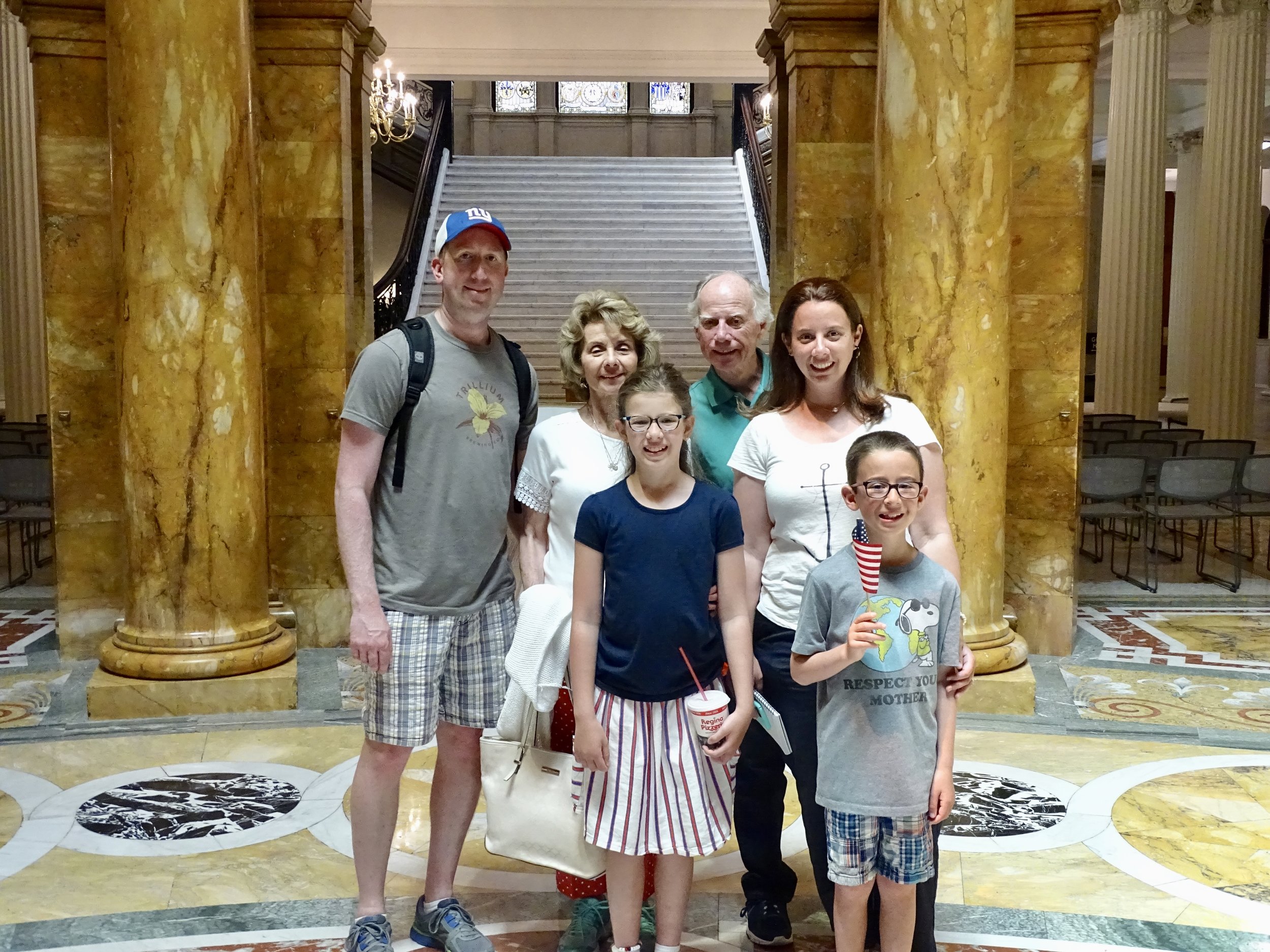 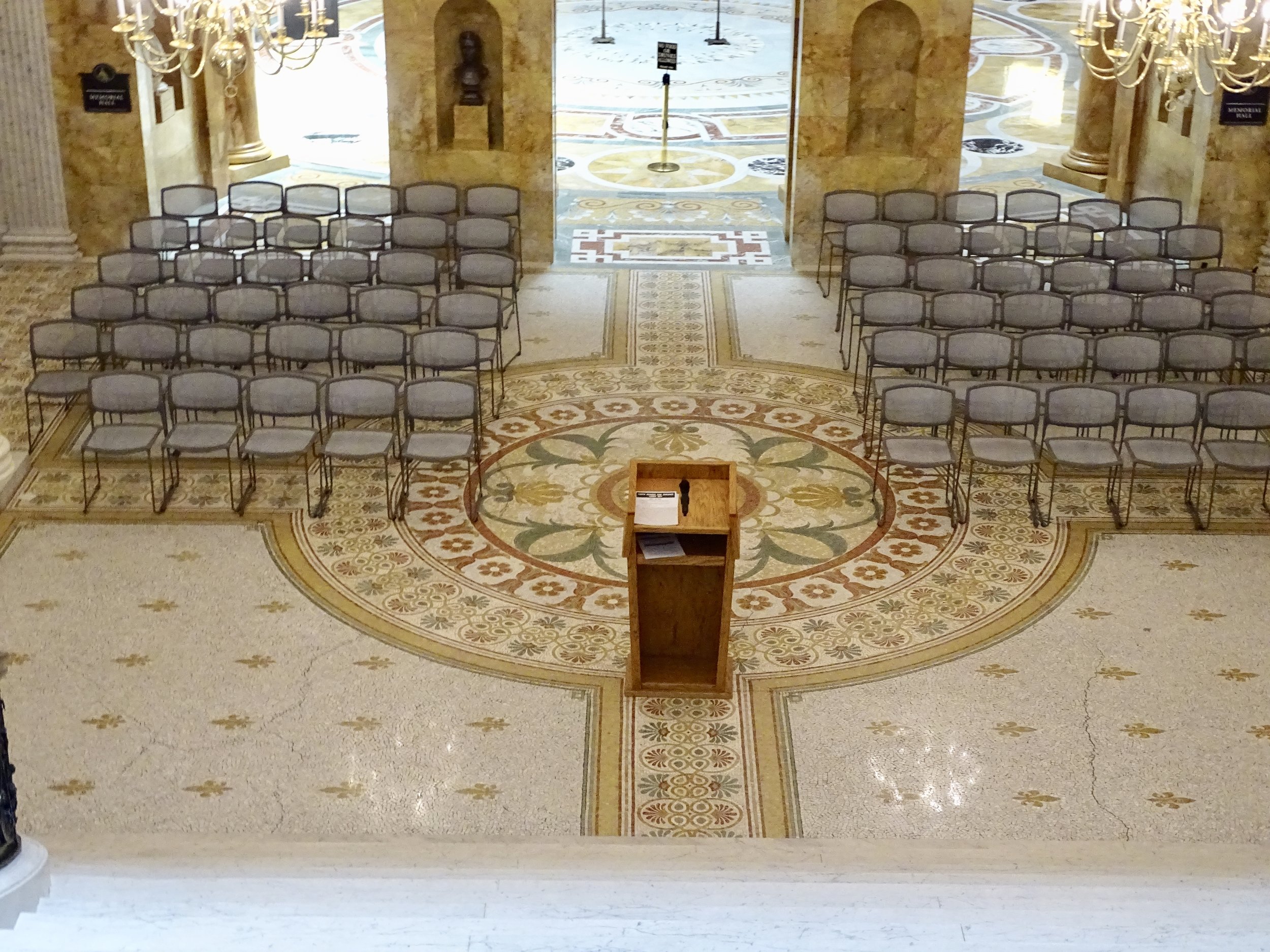 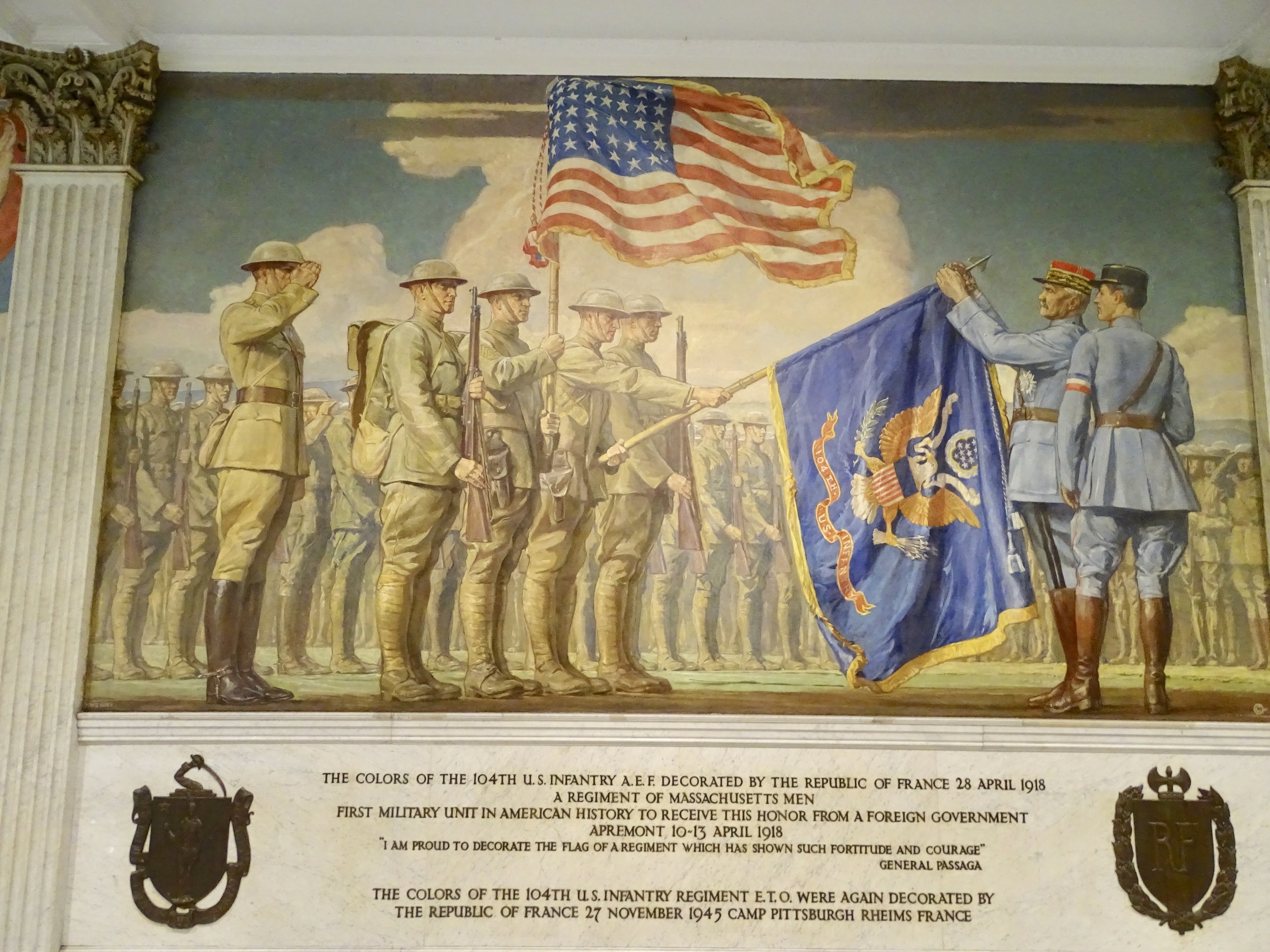 5. The House of Representatives Chamber, the “Blue Room”, is home to 160 state representatives, who each represent 40,000 people. Democrats sit on either side and Republicans sit in the middle. Be sure to check out: 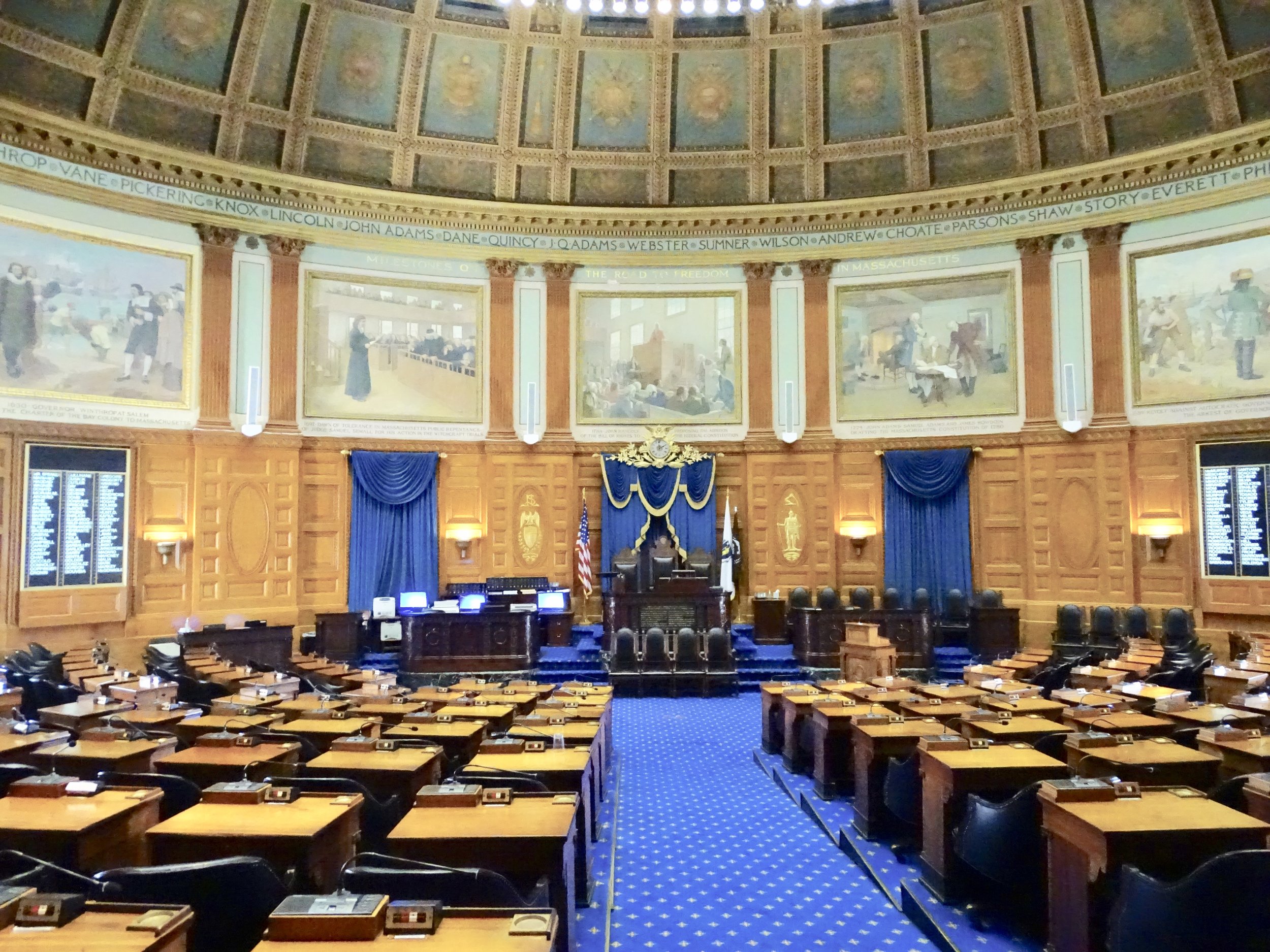 6. The Senate Chamber, home to 40 state Senators, is located directly below the golden dome of the State House. The elected Senate President sits under a golden eagle. Senators still vote orally (no buttons!)  Be sure to check out: 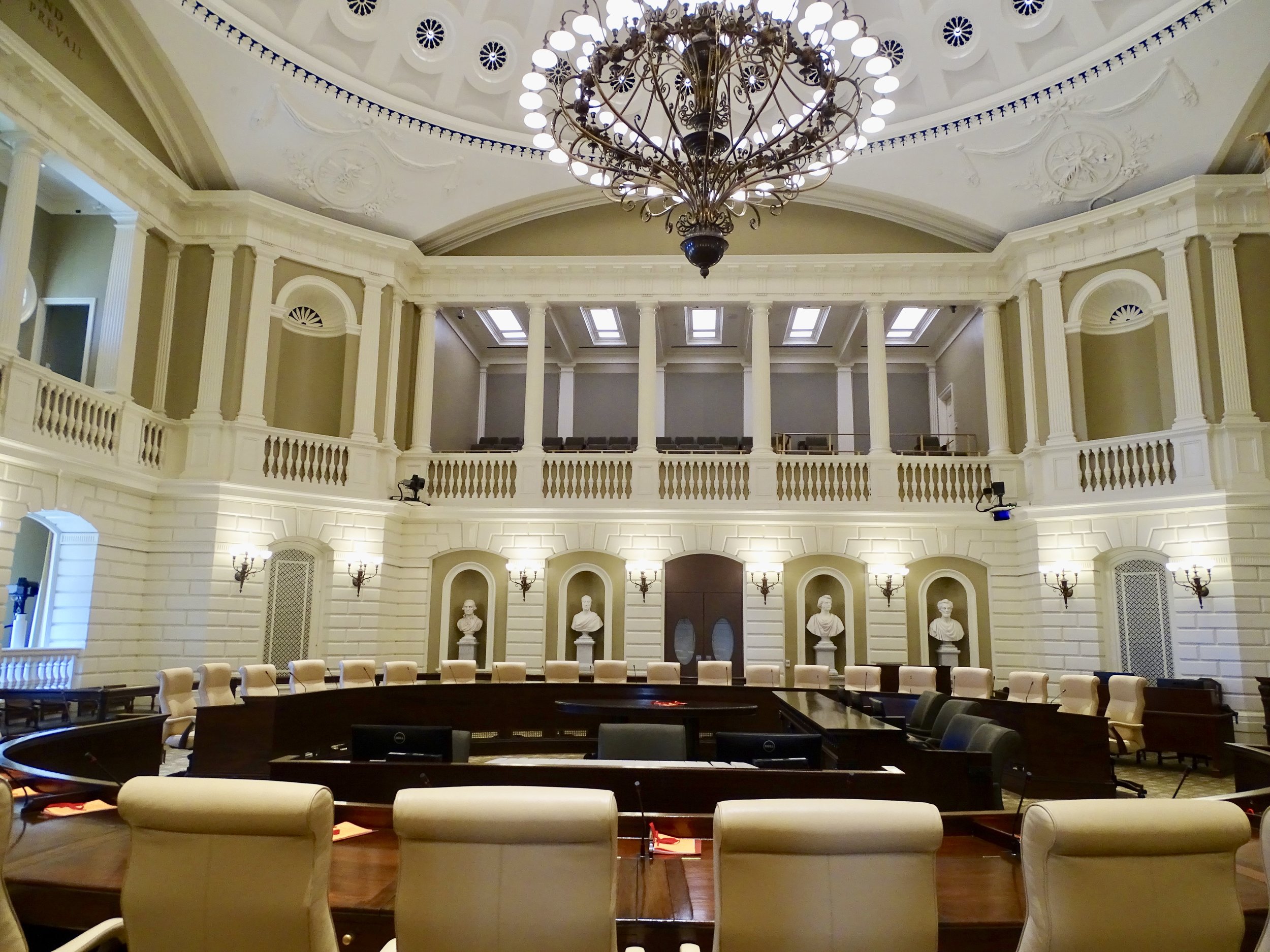 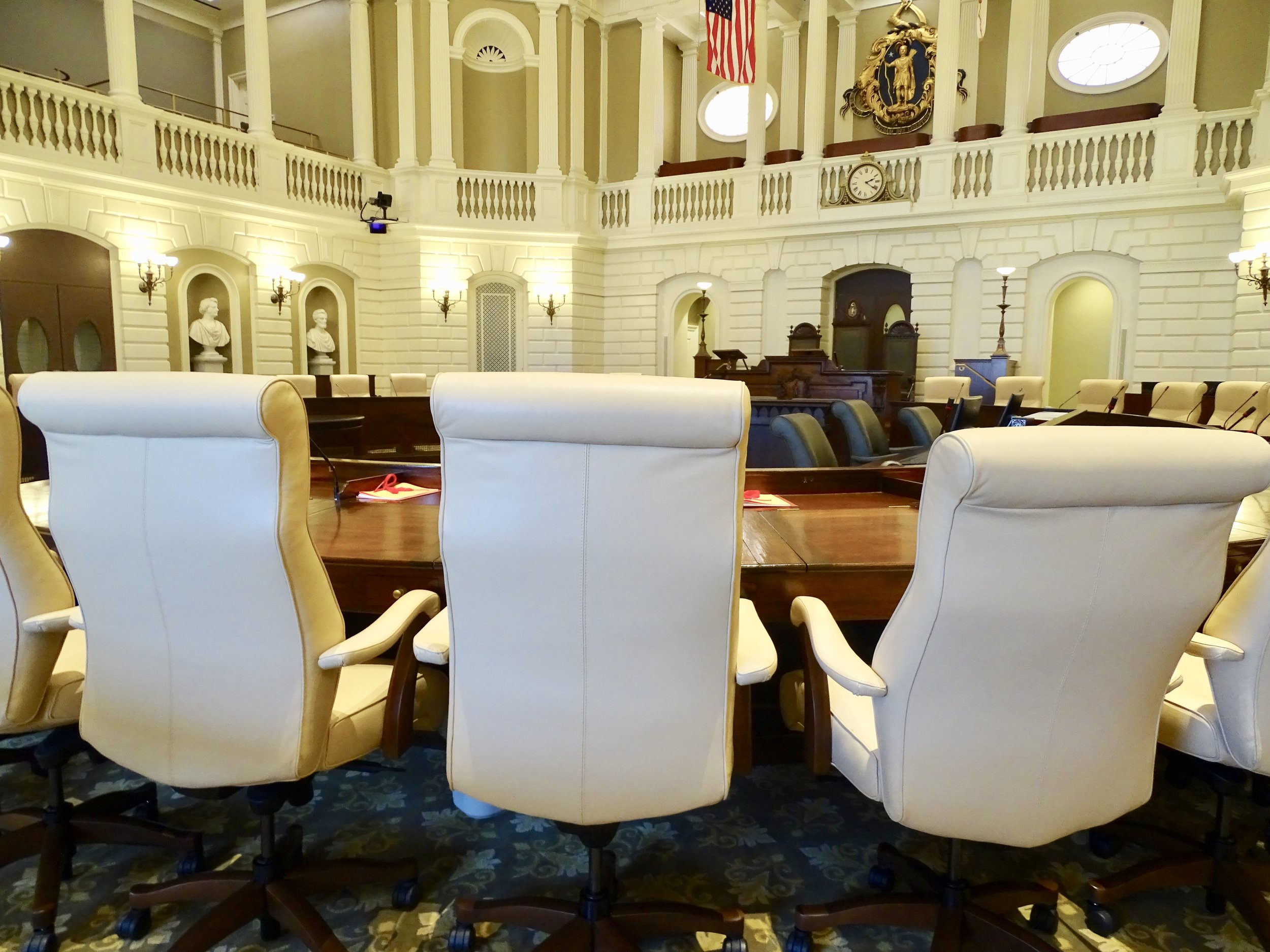 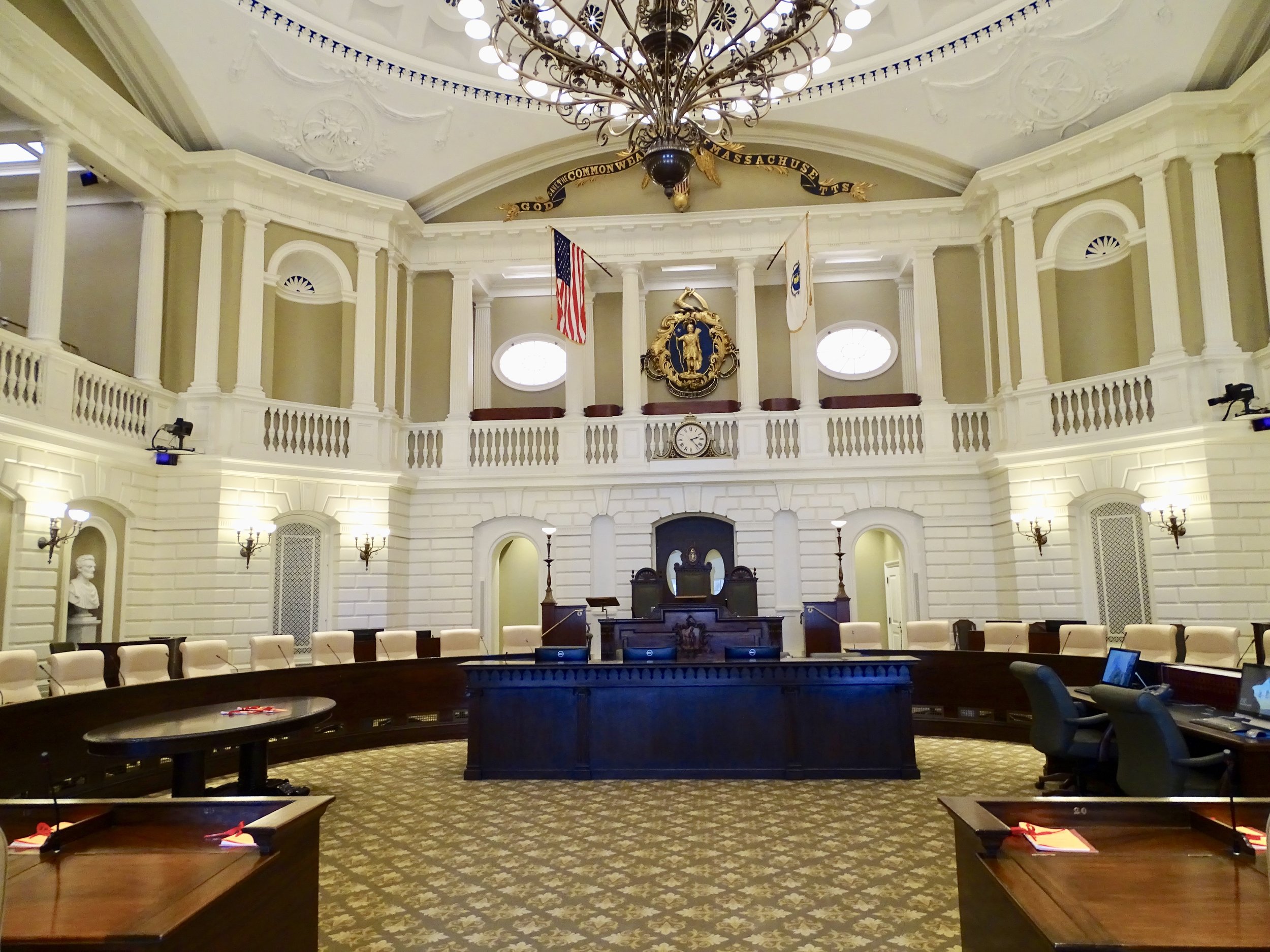 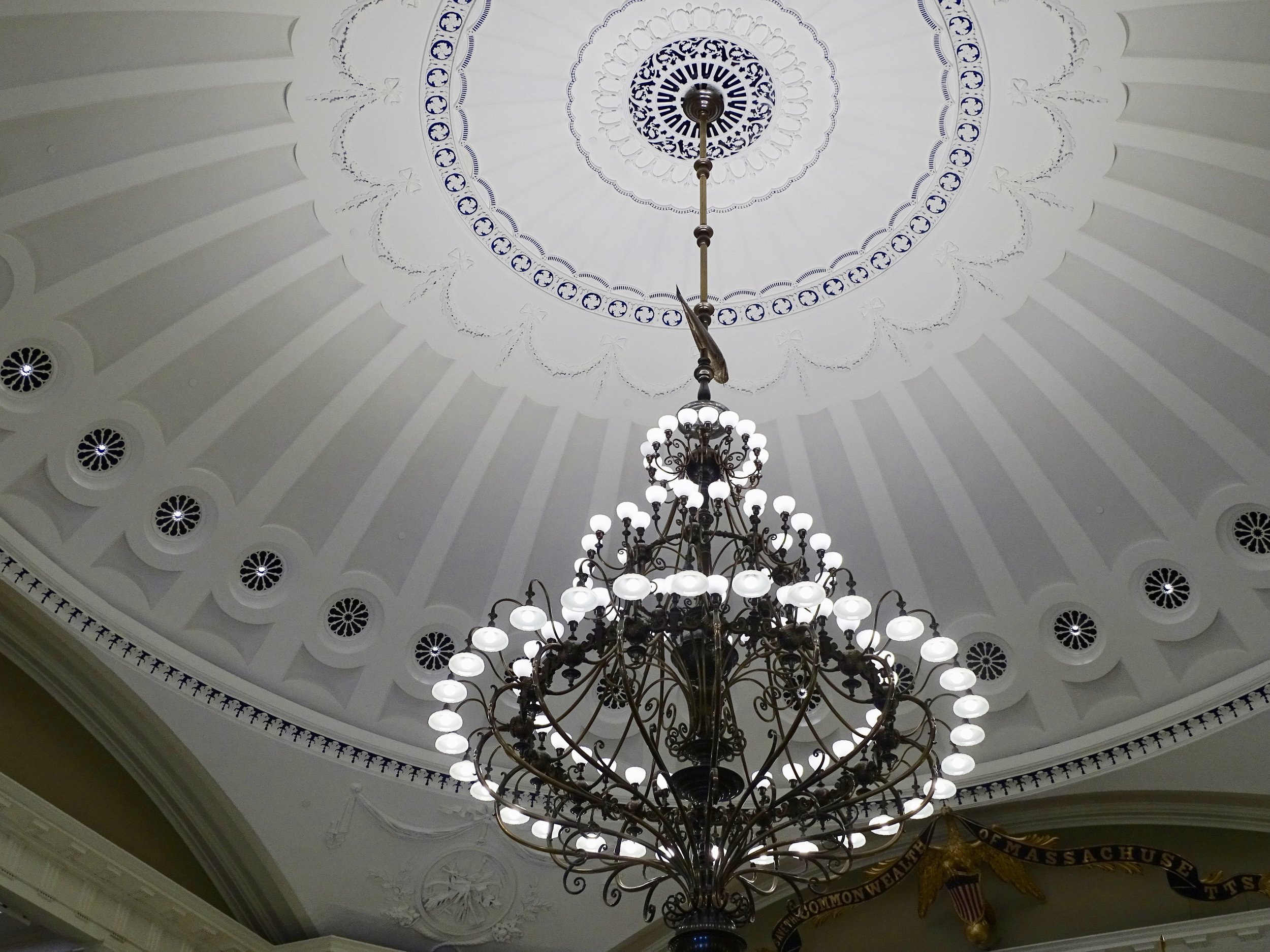 7. Executive Office Waiting Room is located outside the governor’s office. The room displays portraits of former governors. Make sure to check out: Note: photos are not permitted in this area of the building

While exploring the grounds of the complex, be on the lookout for six outdoor statues honoring influential public figures like

When exiting the complex, Boston Common, the oldest public park in America, will be right in front of you. Kids will love exploring 50 acre park, which includes: 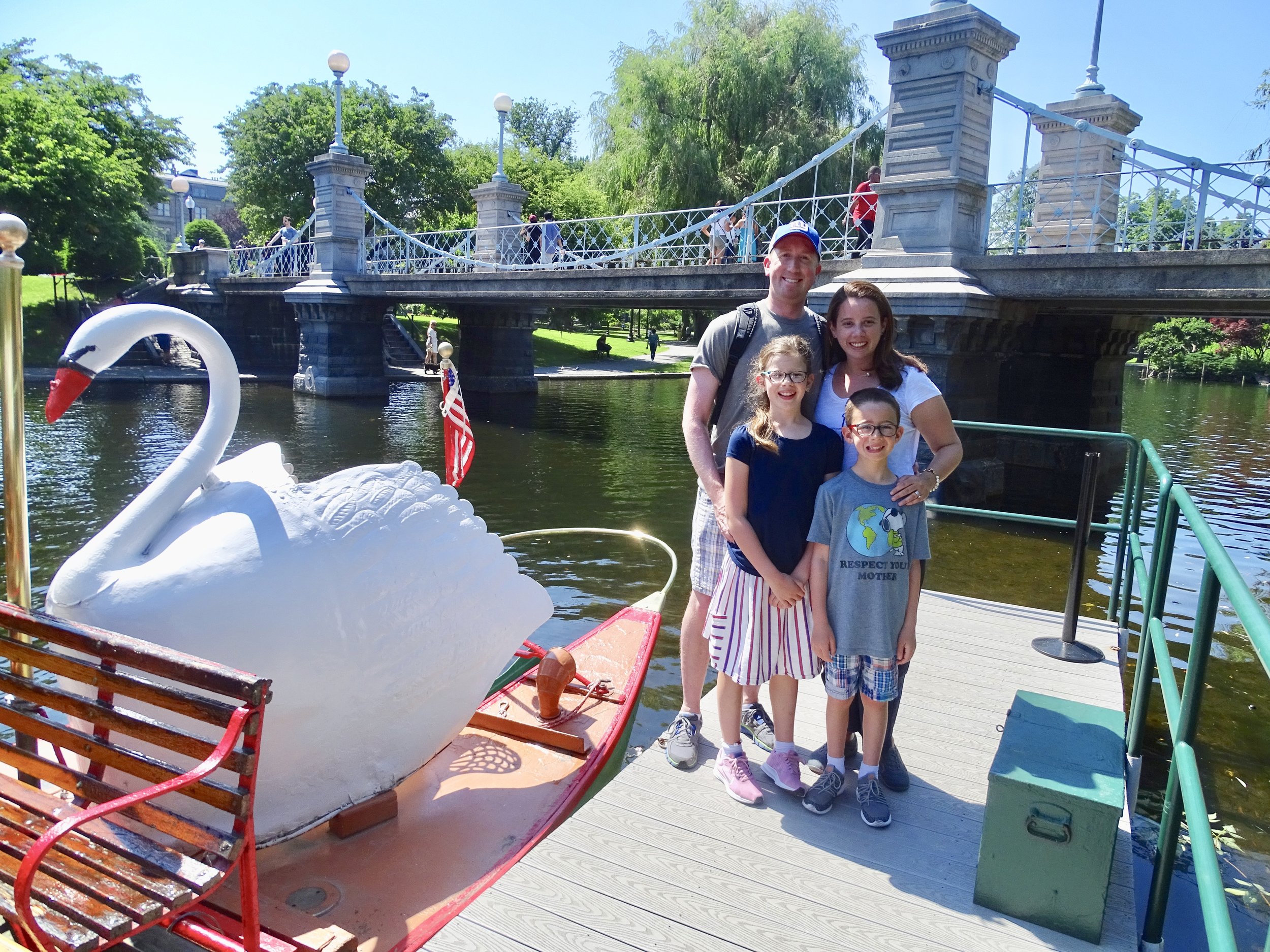 The South is known for numerous plantations: large estates with farms producing a wide variety of crops. One of the most popular and still functioning plantations is the Boone Hall Plantation in Mount Pleasant in South Carolina.  Located just 20 minutes outside of historic Charleston, Boone Hall was founded in 1681 on the banks of the Wampacheone Creek by English Major John Boone. For centuries the plantation was known for growing and selling cotton and pecans. Now, the Boone Hall Farms Market also sells various fruits, vegetables, seafood (from the local docks), prepared foods, and gifts. Film buffs will recognize the estate from the film “The Notebook.”

The plantation offers a wide variety of ways to explore the site and learn from history. All tours are included with the admission fee. I first wrote about Boone Plantation for Kidventurous, but wanted to share some of my favorite parts of our visit and a few nearby bonus stops: (updated for summer 2017)

This past weekend Connecticut celebrated Connecticut Trails Day with almost 200 events in and around many of the 142 state parks, forests, and beaches. Overseen by the Connecticut Department of Energy and Environmental Protection, state parks, forests, and beaches cover 255,000 acres of public space and thousands of trails for hiking and biking. One perk of 2020 and 2021 has been our family’s focus on spending more time outdoors, exploring many of these public spaces. To date, we’ve visited about 30 state parks and you can read about our adventures (and trail recommendations and travel tips) in this post focused in Fairfield County, this post focused in western Connecticut, this post focused on central Connecticut, and this post focused on the Mystic area. We’ve also started to amass proper hiking equipment (headline: you’ll want more than just sneakers) and you can read about our hiking supply post here.

The Franklin Institute’s mission is to “inspire a passion for learning about science and technology” and the museum’s 12 permanent exhibit halls definitely support that mission. The science museum was created to honor America’s first scientist, Benjamin Franklin, and opened to the public in 1934. It’s one of the most popular spots to visit in Philadelphia (and Pennsylvania) with over 400,000 square feet of hands on exhibitions, two auditoriums, an IMAX Theater, and a planetarium. The Franklin Institute offers several Escape Room programs, Speaker Series lectures, workshops, Star Parties (adults only!), and star gazing events. Whether you’re a local or in town for a visit, it’s worth checking out their calendar for special events.

Philadelphia, Pennsylvania’s largest city, is known for many things: being the “City of Brotherly Love”; the home of the cheesesteak, the first bank, and the Liberty Bell; and the place where “eagles fly.” Home to over one million people and less than a two hour drive from both New York City and Baltimore, it’s probably most know for being the first capitol of America and the location of the signing of the Declaration of Independence. There certainly is a lot of history “preserved” in Philadelphia, but there’s also a ton of other ways to explore the city with kids. Before you head to Philadelphia, check out VisitPhilly.com for tons of recommendations, itineraries, and calendars. The website is well organized and has suggestions organized by neighborhood, season, or family friendly activities. If you’re planning on visiting for a few days, consider purchasing a CityPass or Philadelphia Pass, both of which offer substantial savings if you visit multiple locations (most of which are on my top 20 list).

The Stamford Museum and Nature Center in Stamford, Connecticut is practically in my backyard and yet it’s taken me almost 12 years to visit! We’ve felt most comfortable visiting outdoor locations due to the COVID 19 pandemics, so this seemed like the perfect time to explore the farm and nature center.

There are over 80 acres of gardens, trails, and buildings spread out across the complex. Visitors are welcome to visit with animals, smell the fruits and vegetables in the garden, check out the playground, explore the mansion, and hike and walk some of the trails.

The Please Touch Museum is one of the most popular spots for kids of all ages in Philadelphia- up to 5,000 people visit each (busy) day! The museum is located inside Memorial Hall, site of the Art Gallery for the 1876 Centennial Exhibition celebrating America’s 100th birthday. There is over 60,000 square feet of exhibits open to the public and various classrooms and meeting spaces. The museum is best for ages ten and under, but there are many exhibits even older children will enjoy. The best part? Visitors are encouraged to “touch” everything!