Built as the Delancey Mansion in 1719, Samuel Fraunces purchased the building in 1762 and turned it into a tavern, later offering it as a place for political and social gatherings and distribution of news. The tavern became known as the Fraunces Tavern and is most famously recognized as the spot where George Washington said goodbye to his Continental Army officers on December 4, 1783. The tavern is also the spot where the first Sons of the Revolution in the State of New York (who own and oversee the museum) formed and the first offices of the Departments of Foreign Affairs, War, and Treasury.

The Fraunces Tavern Museum opened as a museum in 1907 and will celebrate its 300th birthday in 2019, with several special celebrations planned (check here for updates). The museum has over 8500 items in the permanent collection and rotates items on display.

Play “I Spy” in the Fraunces Tavern Museum to find:

1. The rare and inaccurate Zuber wallpaper in the Clinton Dining Room. The wallpaper (which is also displayed in the White House!) is suppose to depict the Battle at Yorktown (in Virginia) but is set in New Jersey.
2. The sword, used by George Clinton (the Revolutionary War general and first governor of New York) in battle, in the Clinton Dining Room.
3. The collection of 40 reproduction flags used in the American Revolution, as well as regiment flags and French flags flown in service in the Flag Gallery. Check out the chronological changes made to the American flag.
4. Replica period dress up clothes in the photo booth behind the flag gallery.
5. Decoder sheets in the Agents of Espionage exhibit. Grab a mission sheet and decode secret messages using the cipher wheel. 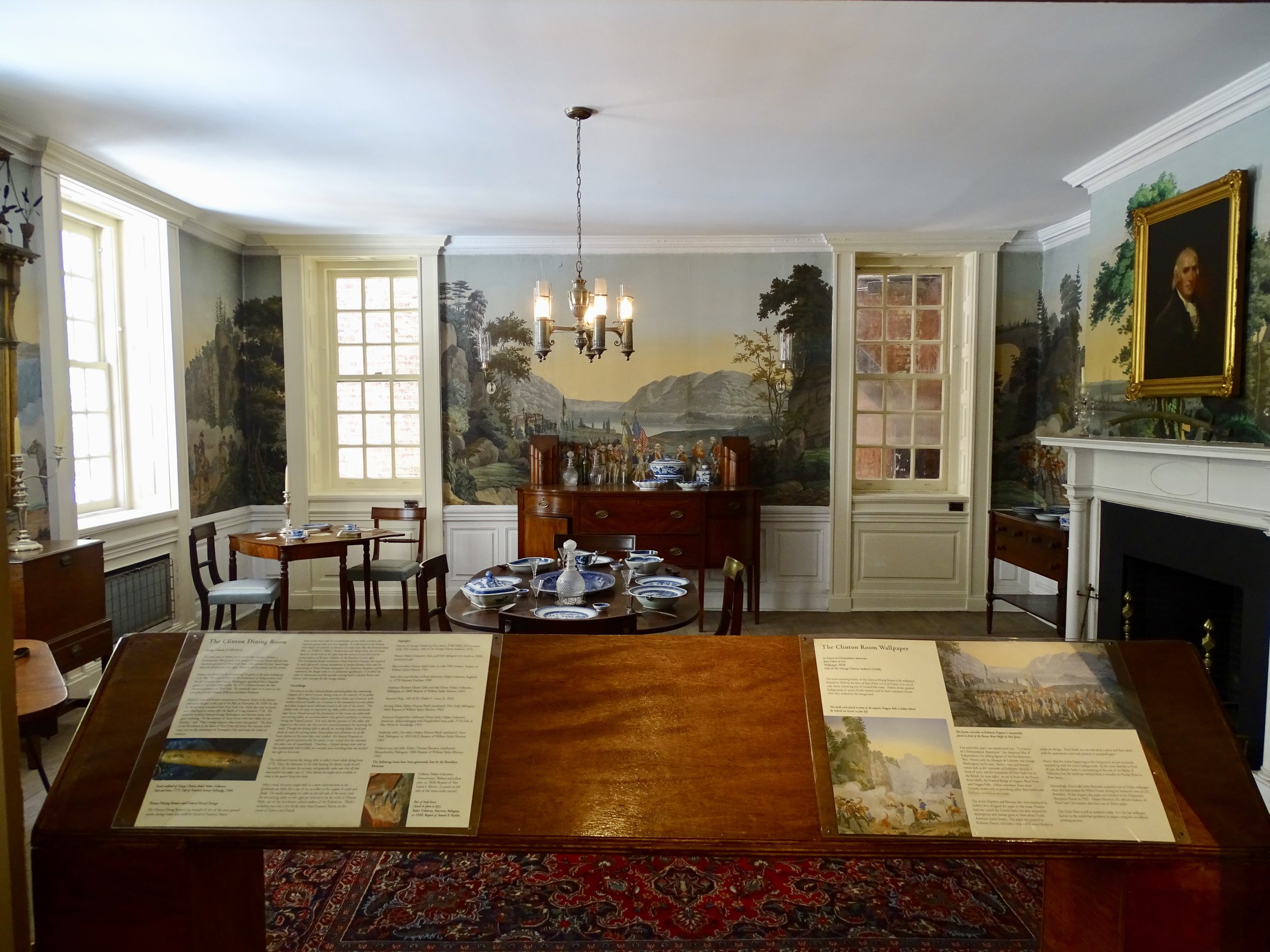 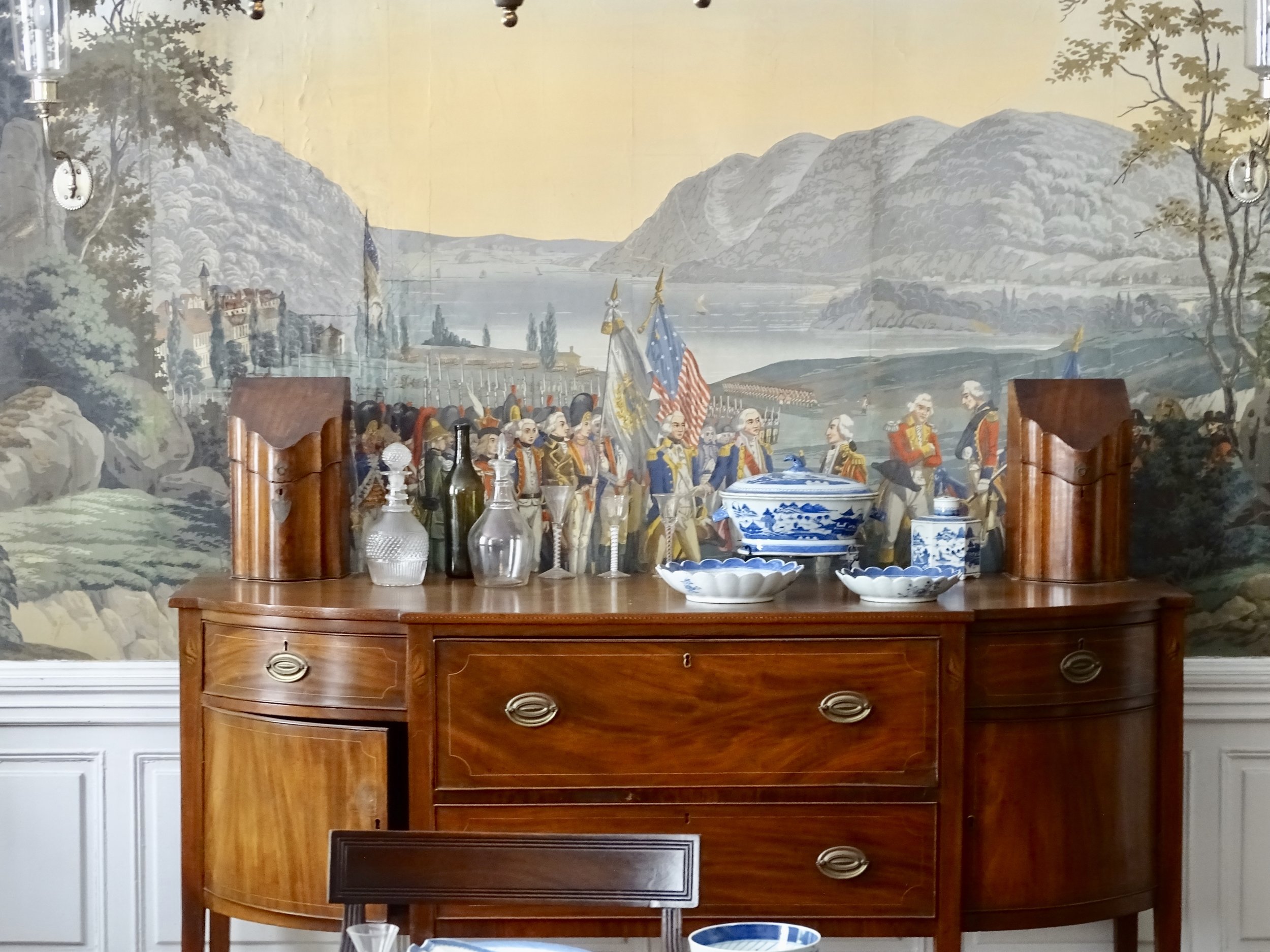 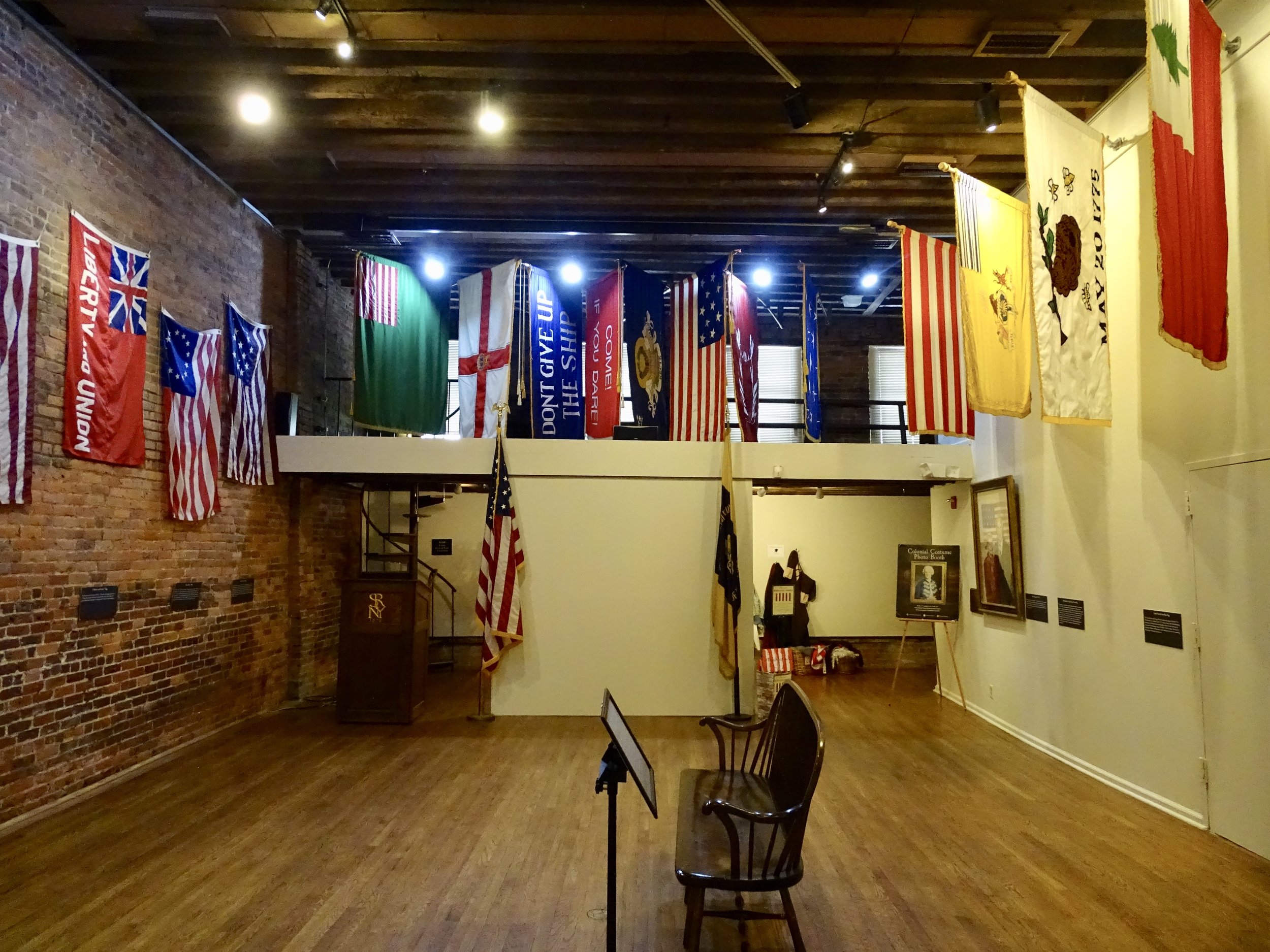 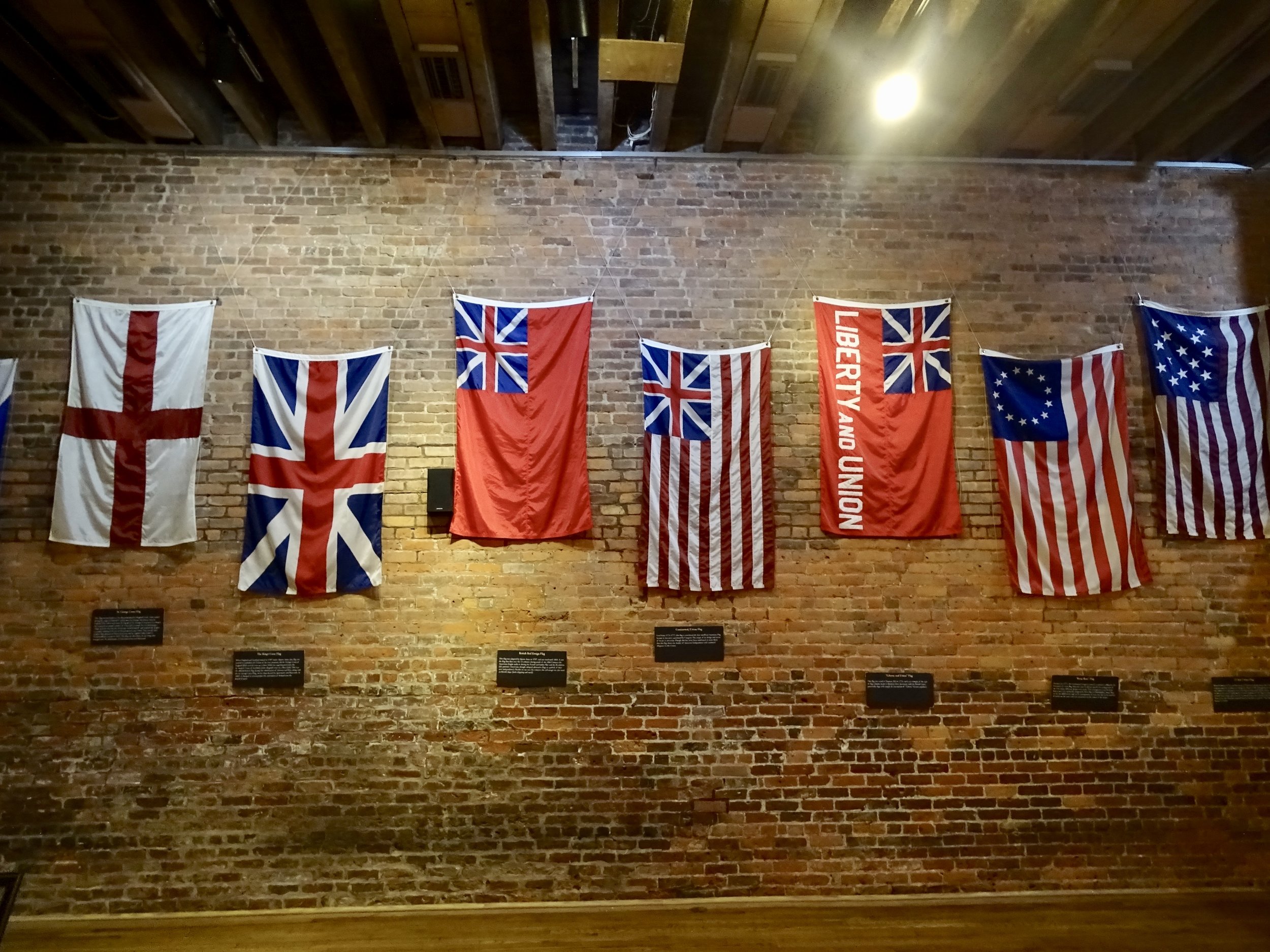 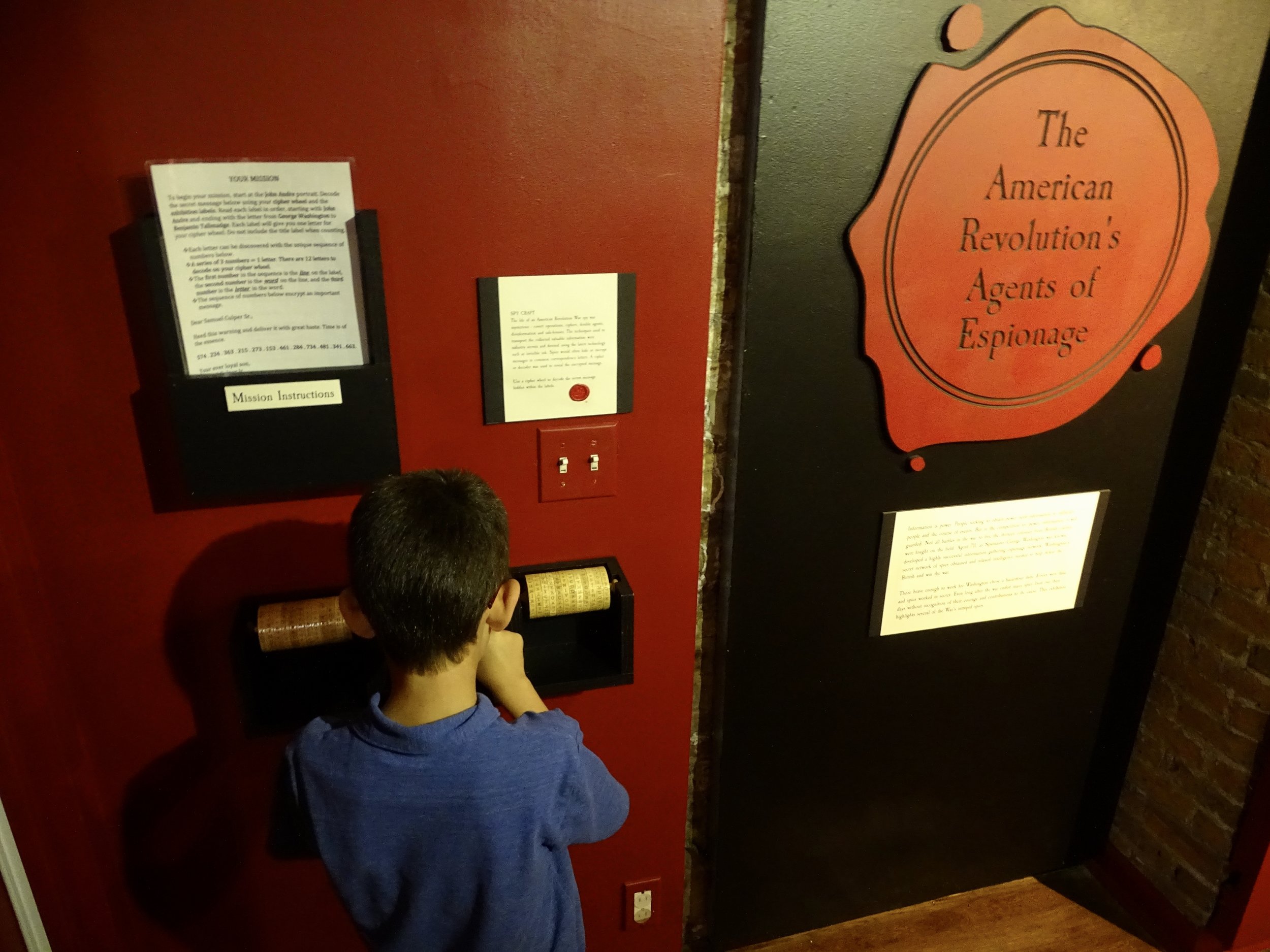 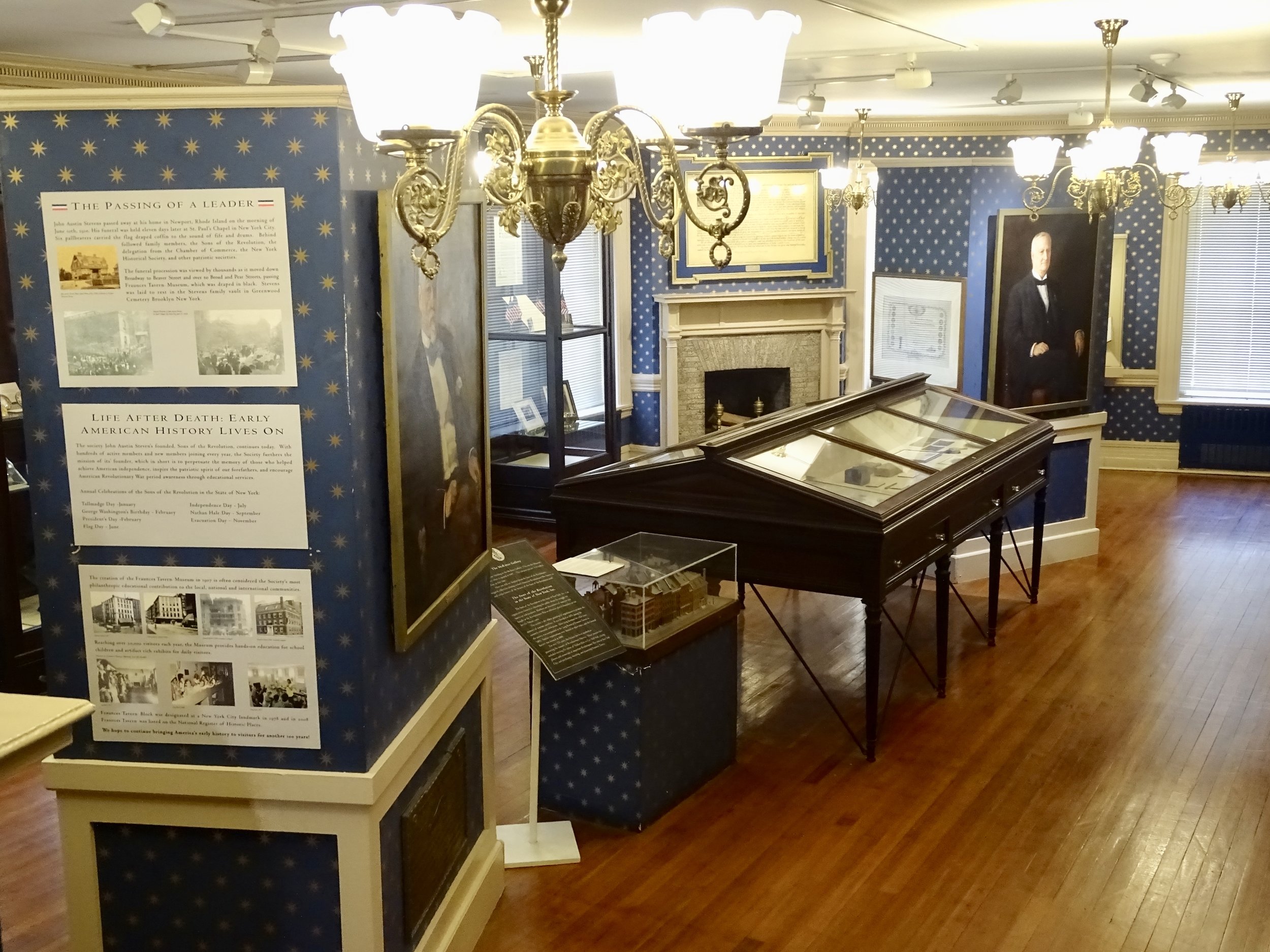 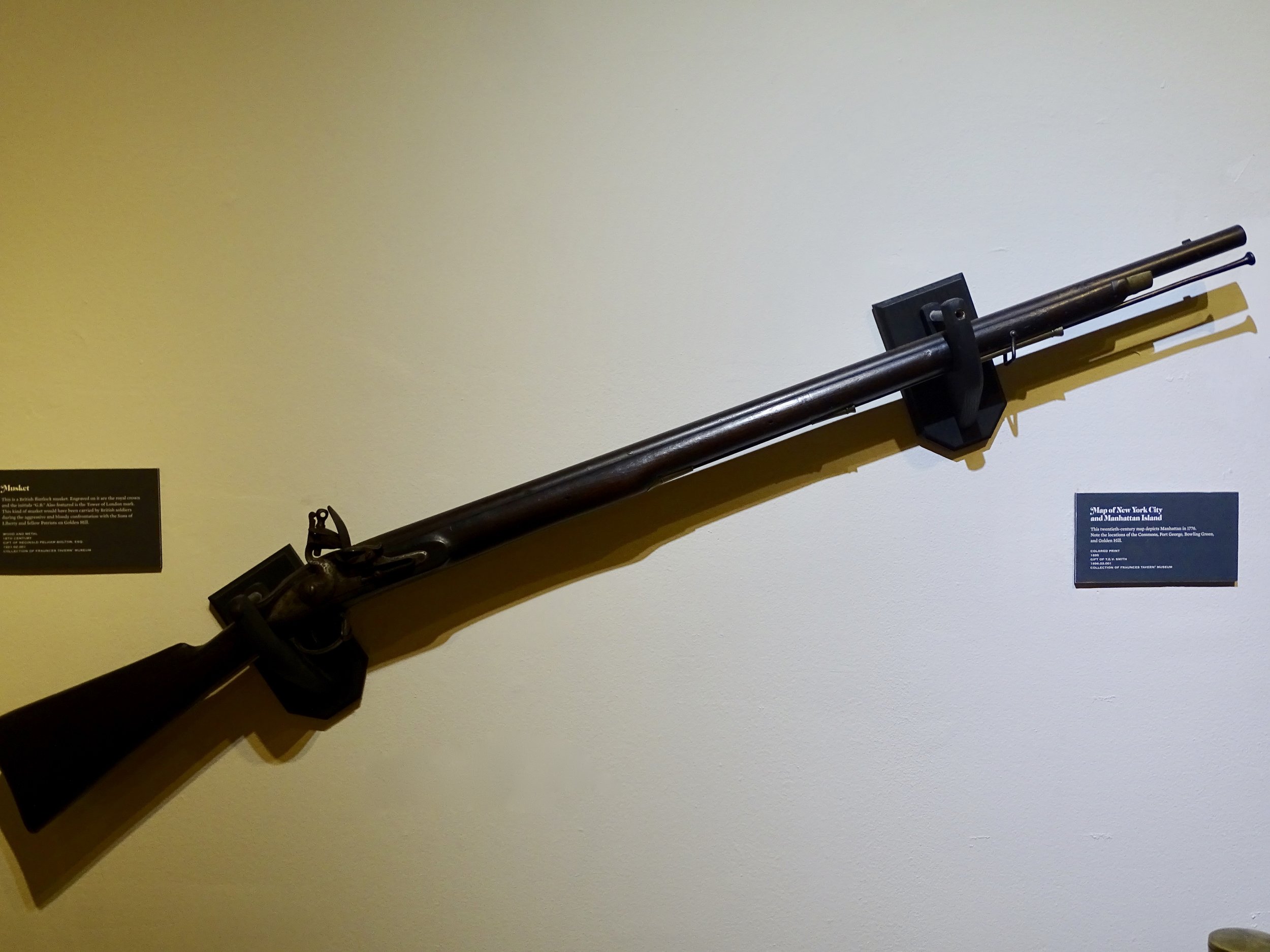 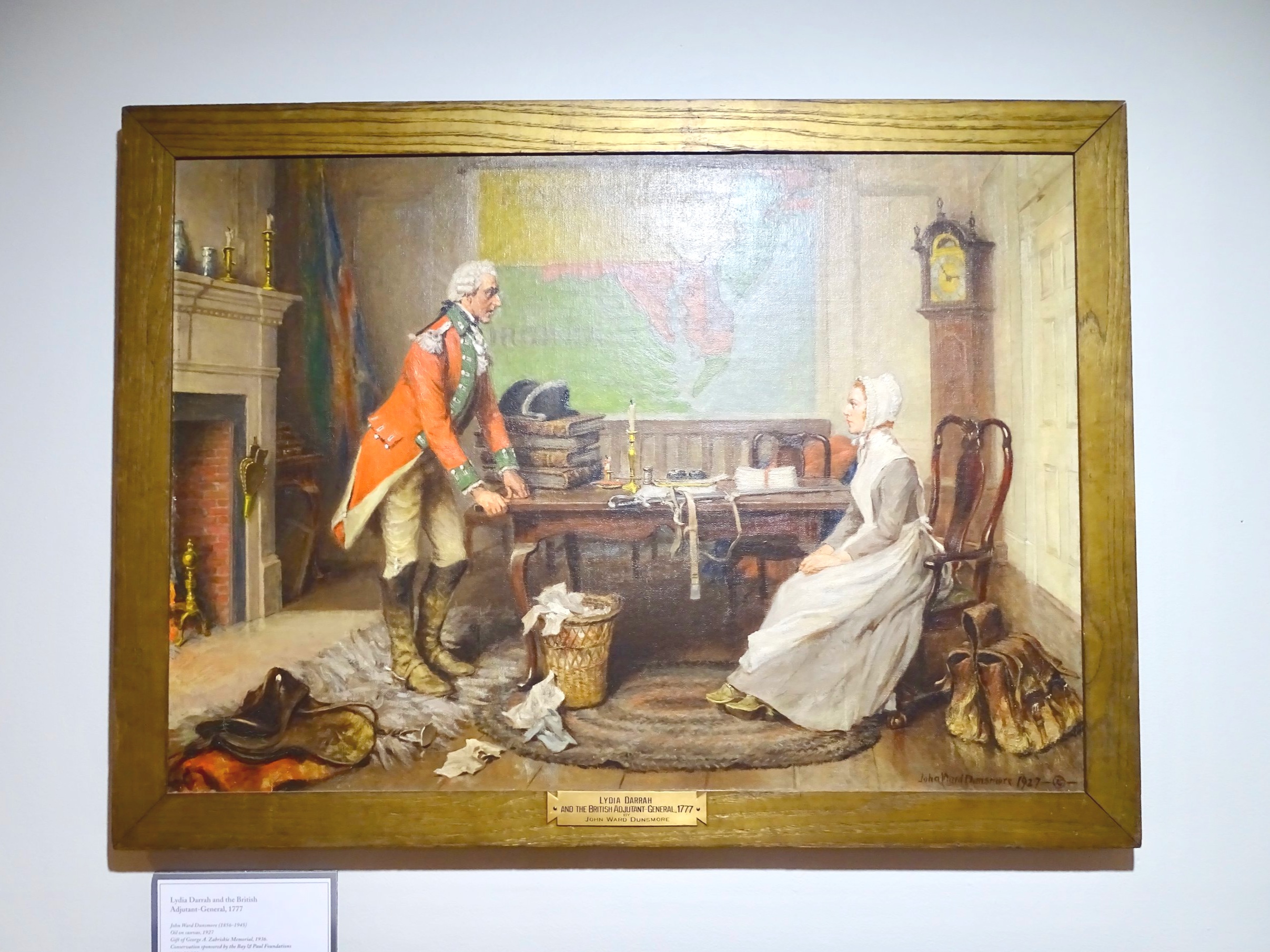 6. Tea from 1774 (that visitors can actually smell!) in the Fear and Force exhibit.
7. A lock of George Washington’s hair and piece of one of his teeth in The McEntee Gallery.
8. Oyster pieces (excavated on site!!) set on the table in the Long Room. Oysters were commonly found in nearby waters and often served at the tavern. The Long Room, the site of Washington’s farewell address, contains dozens of period pieces (although not original to the Tavern).
9. The large punch bowl displayed on the table in the Long Room.  Fraunces was well known for his homemade spiced rum.
10. The Fraunces Tavern Restaurant & Bar: Eat at the tavern! The first floor is a restaurant open for lunch, brunch, and dinner. Menu here. PS- They offers over 200 whiskeys, 130 craft beers AND a kids menu! 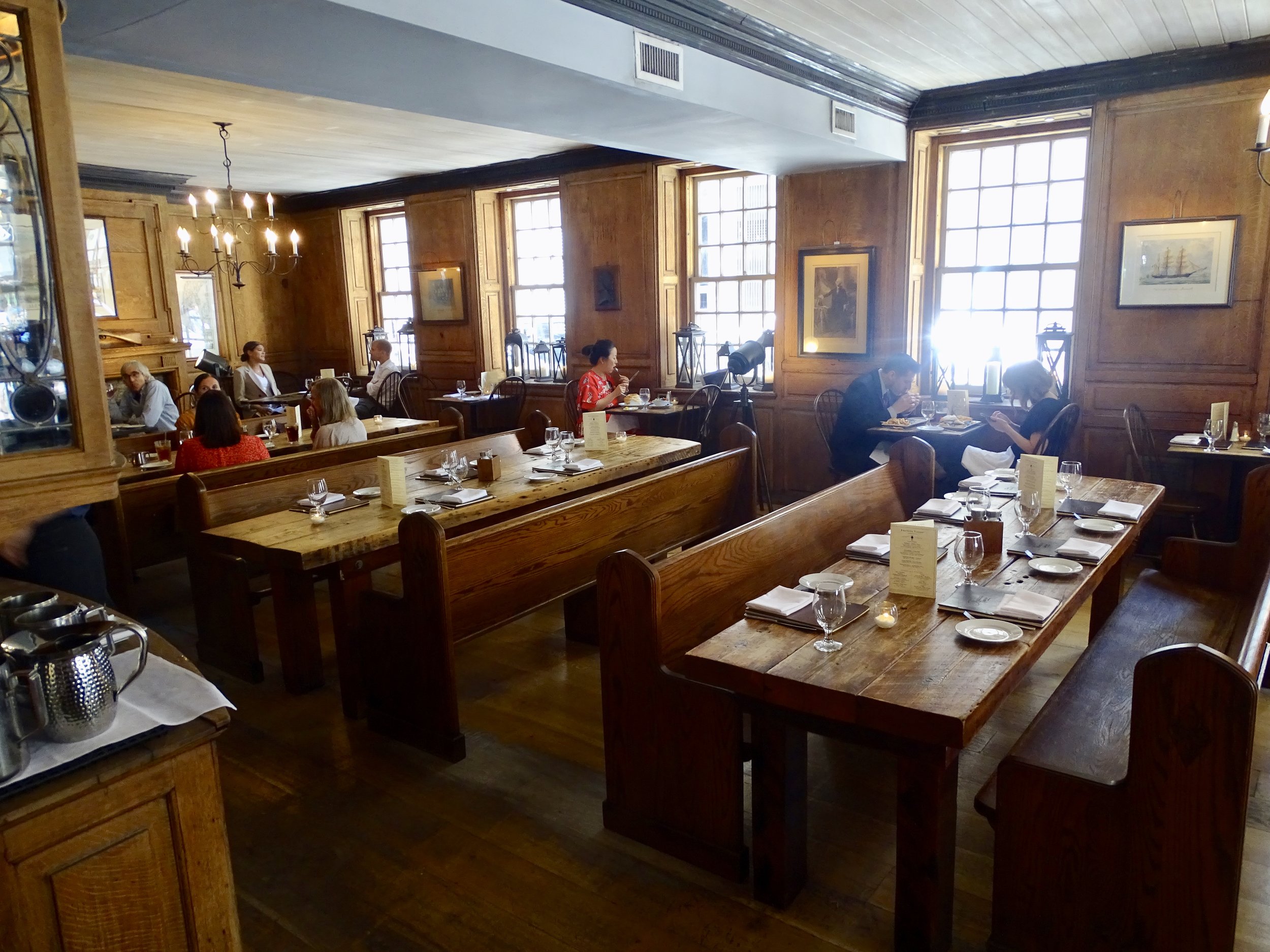 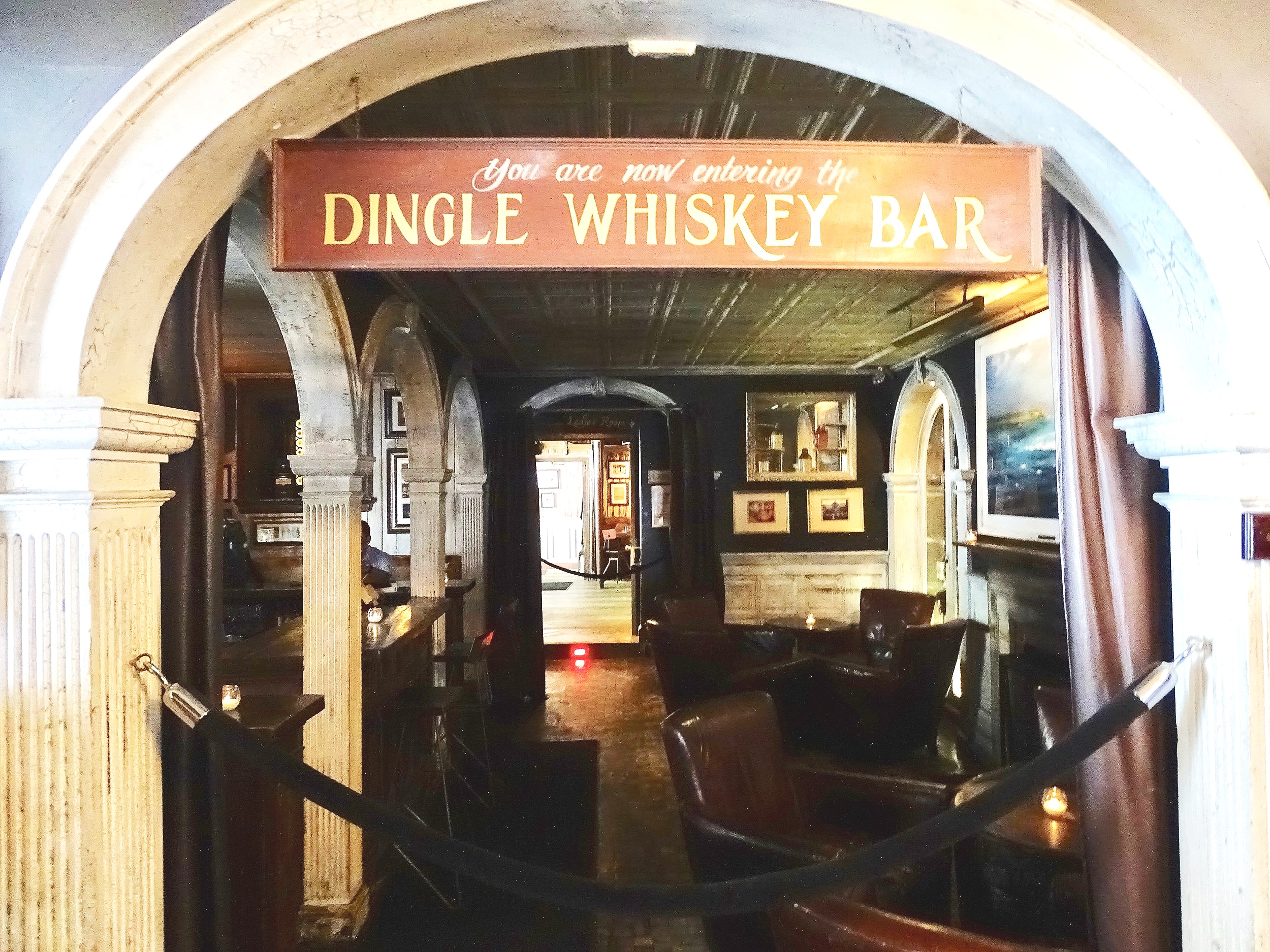 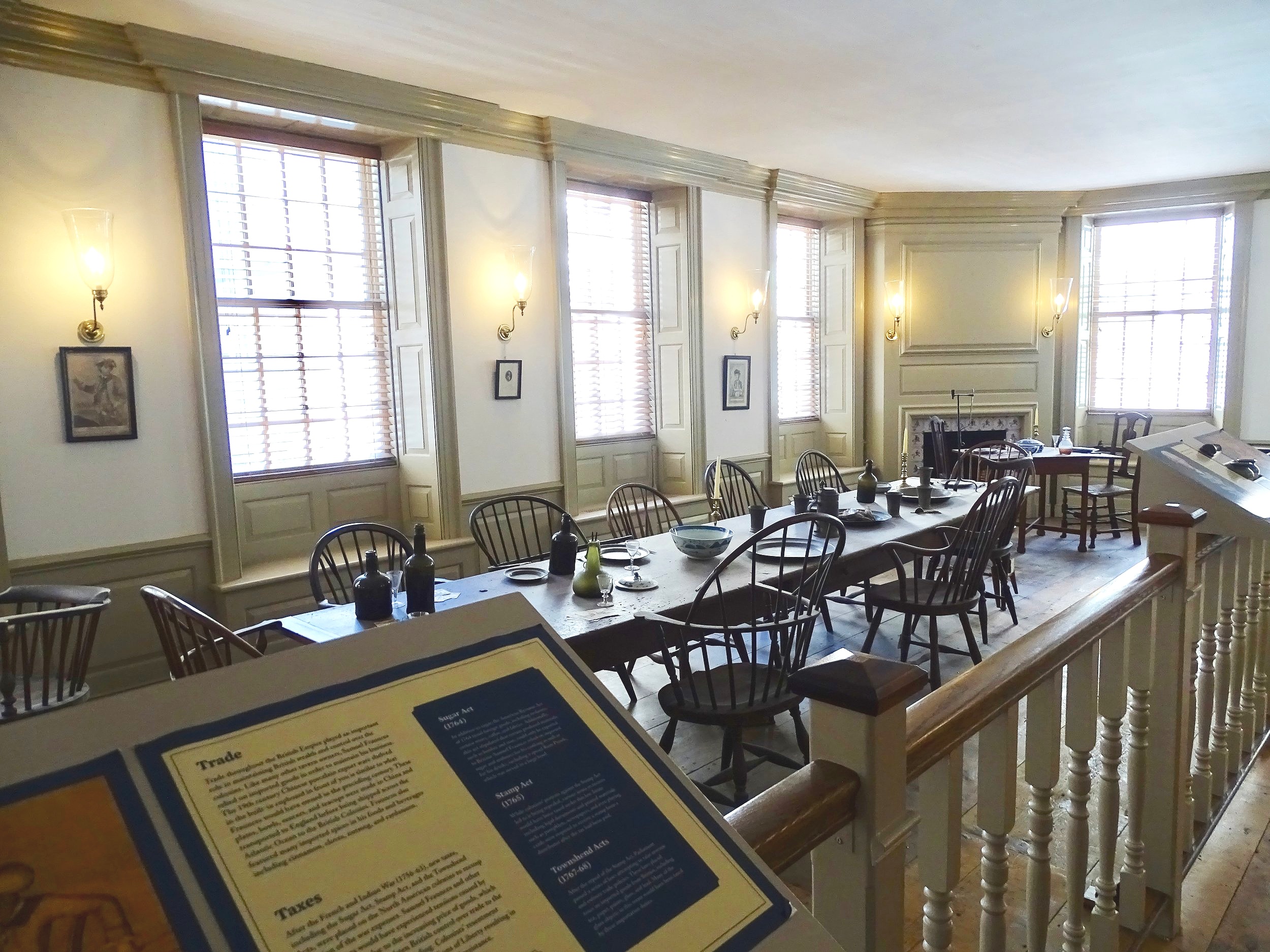 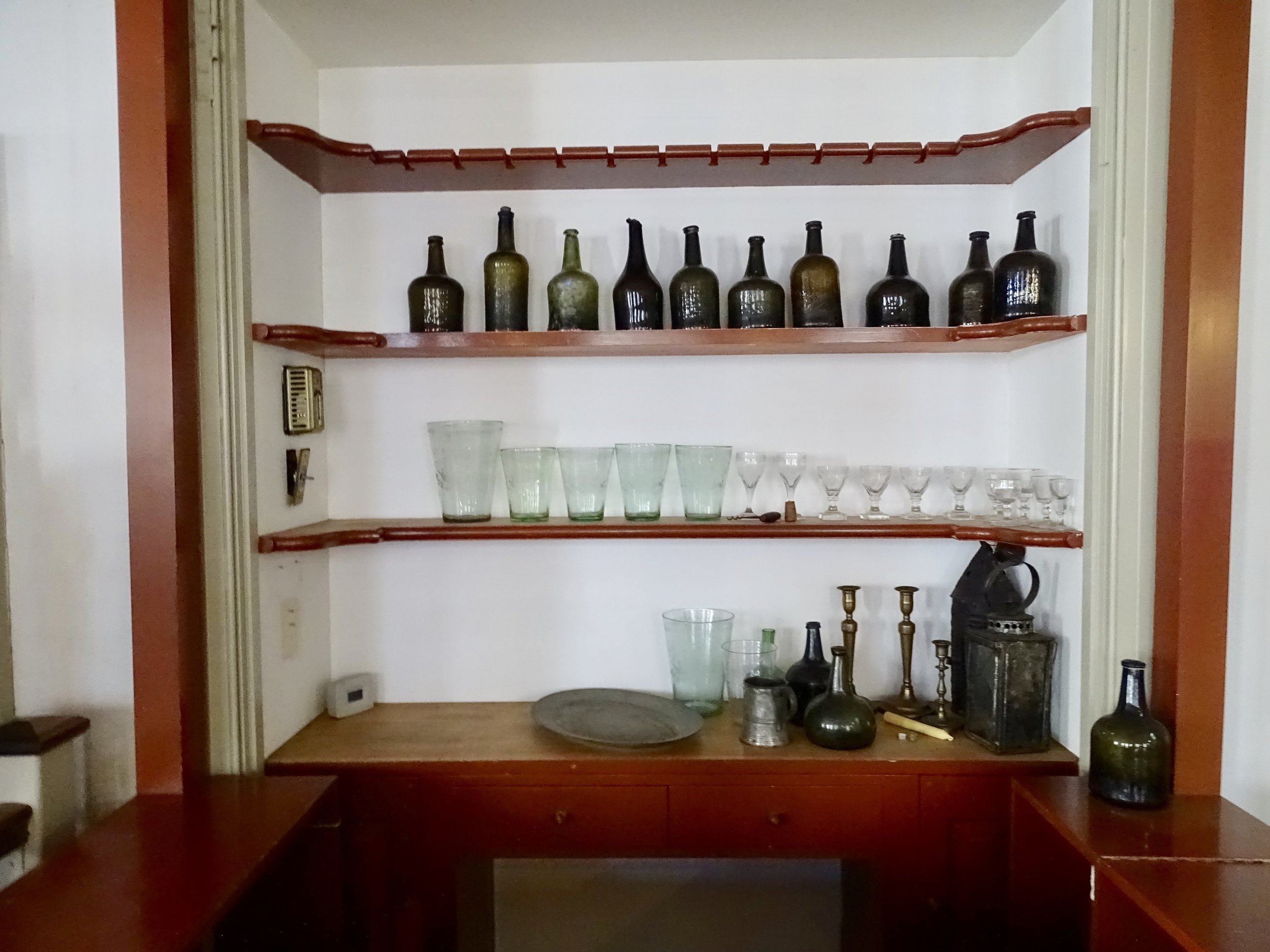 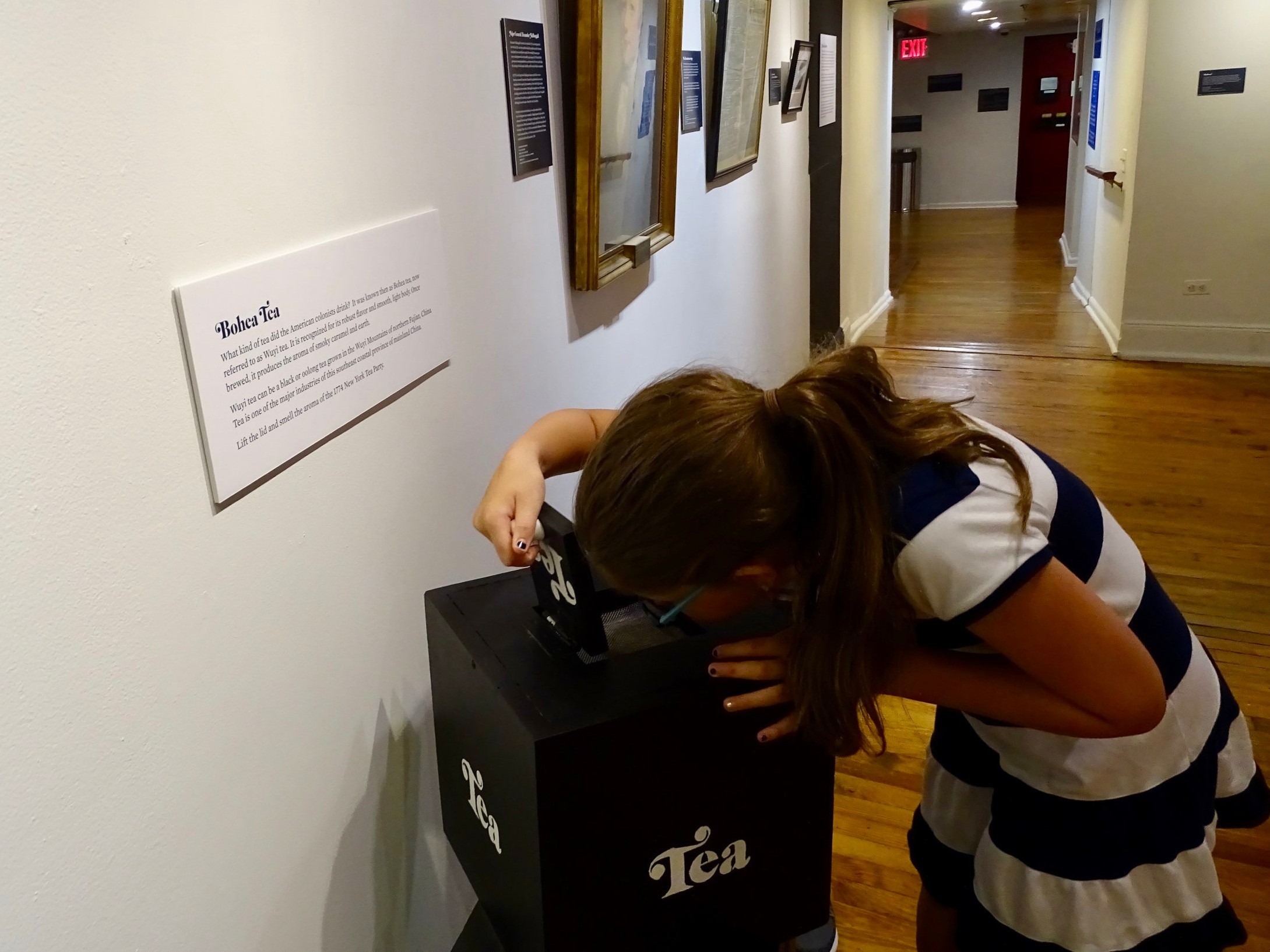 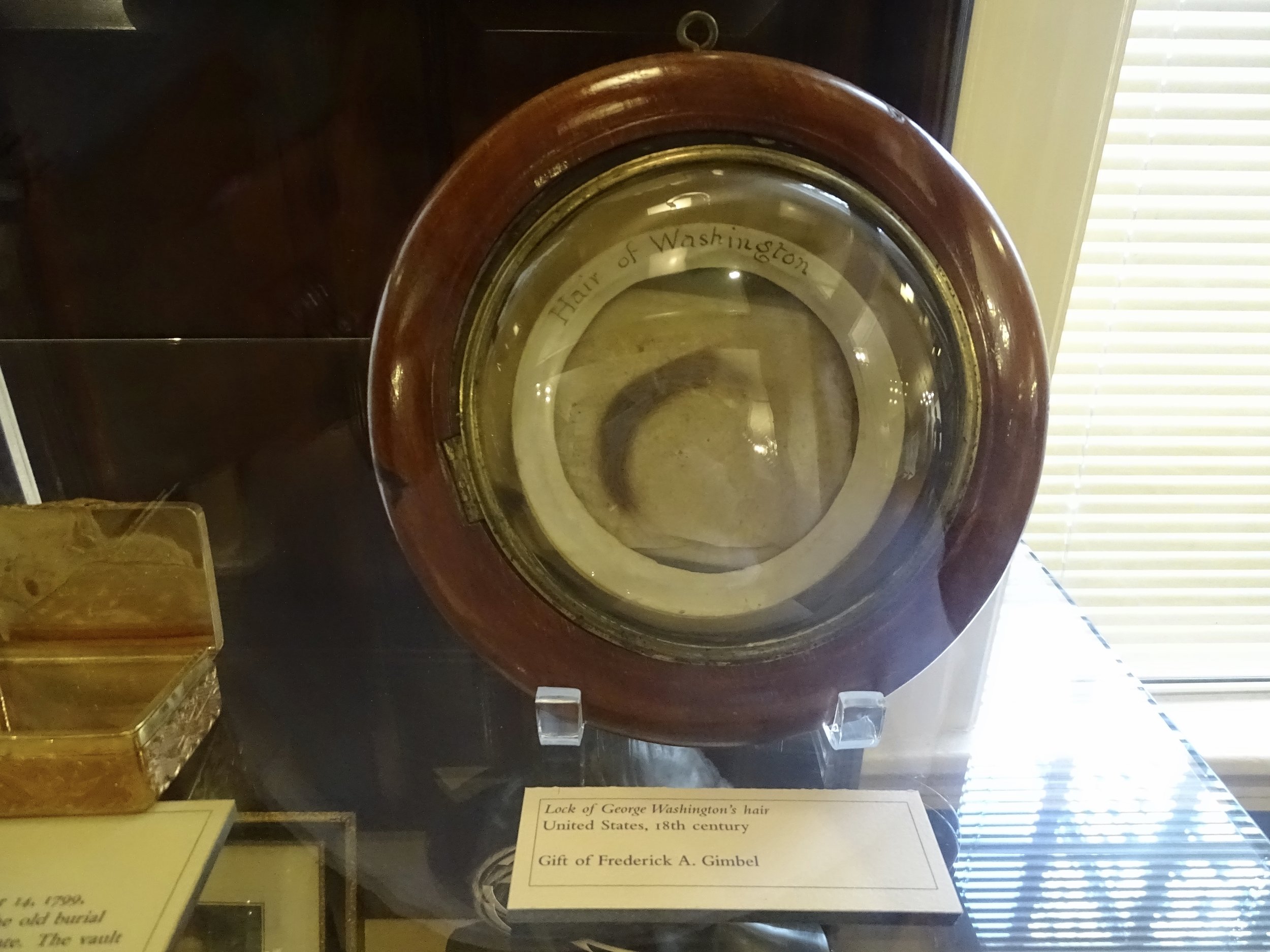 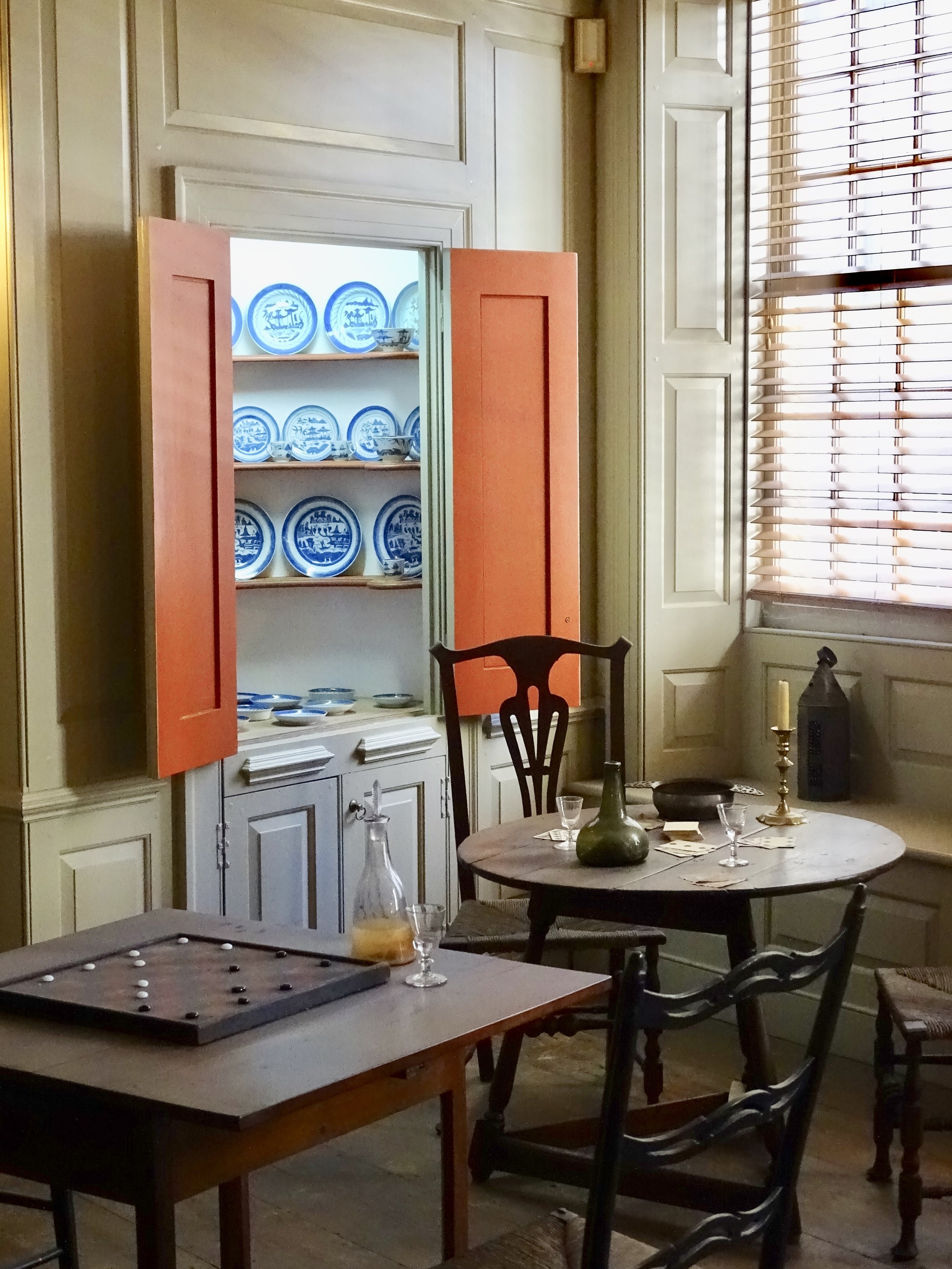 Disclosure: My family was given a media pass to explore the museum. All opinions expressed are my own.

Woodstock, Vermont is a quintessential New England town. Located one hour south of the Vermont capital of Montpelier and just over two hours from Boston, Massachusetts and Hartford, Connecticut, Woodstock has a population of just over 3,000 but swells with visitors in both the popular foliage and summer seasons. Many of the activities center around nature: skiing, hiking, fishing, biking, and swimming, but there are also plenty of historical museums, hands-on centers, tons of family fun, and plenty of beautiful shops (if the kids can be entertained). We visited Woodstock in the summertime many years ago, but found that winter is also a great time to visit when we returned last month. While fact checking logistics, we found woodstockvt.com helpful with places to explore, dining and shopping suggestions, and  calendars of events.

Growing up on the South Shore of Massachusetts, and having an avid sailor for a father, my family took many a day trip to visit Newport, Rhode Island. I can remember touring the mansions as a child, admiring the boats at the Newport Boat Show with my dad, and enjoying the beaches, restaurants, and various outdoor recreational activities during the summer. As an adult, I have returned to Newport many time, with my husband for a weekend getaway and with girlfriends as an escape from the duties of motherhood. Recently,  my family spent Thanksgiving weekend celebrating the start to the holiday season in the “City By the Sea.” You can read all about our holiday celebrations here.

However, you would need months (possibly years)  to explore every place in the city, so I think Newport should be on everyone’s list; better yet, if you live within a few hours, it’s worth making visits each season. The city is filled with visitors during the summer months and you absolutely should visit during the summer. However, there is also plenty to do during the winter.

If you need help planning a visit to Newport, DiscoverNewport.org is the perfect planning tool. It’s extremely easy to navigate and full of ideas based on your preferences for activities, food, accommodations, and budget. There is also a massive directory for weddings planning. The online calendar was up to date and quickly linked me to websites and phone numbers. It also covers more than “just” the city of Newport, by including both Newport and Bristol Counties. I’ve organized suggestion based on two popular areas of town:

During a recent trip to visit my dear friend, Sandy, and her family in Natick, Massachusetts, we spied rain in the forecast. Sandy found a great spot for us to meet in nearby Worchester, Massachusetts (more on family fun in Worchester coming soon!): EcoTarium.

EcoTarium participates in the Association of Children’s Museums and the Association of Science-Technology Centers reciprocity programs. This means that my friend’s membership to her local science center (or I could have used my membership to our local children’s museum) allowed her to bring us as guests- for free. This is a wonderful program that my family has taken advantage of dozens of times. Look for an upcoming post about all the benefits.

Part science center, part zoo, part outdoor classroom,EcoTarium also has a planetarium, outdoor train ride, plenty of hands on exhibits, and is tons of fun for toddlers, children, and adults alike! Here are our favorite parts:

Concord and Lexington Massachusetts are two towns located northwest of Boston steeped in the history of the “birth” of America. The National Park Service has done a wonderful job of preserving many important sites in these towns associated with the battle of April 19, 1775, when colonial milita fought British troops (called “regulars”) in a battle that began the American Revolution. Collectively, these sites are known as the Minute Man National Historic Park. It’s well worth your family’s time to spend a day (or two or three!) visiting the area. Here are my top picks:

The New York Botanical Garden is one of my favorite places to visit. My family lives less than an hour from the Bronx and it’s a pretty drive on the parkways. The 250 acre campus was created in 1891 and has over one million planets, 30,000 trees, and over four million specimens on site. They have dozens of classes, workshops, field trips, family events, summer camps, and even college degrees; the fall 2017 catalog is 55 pages!  There is so.much.to.do for every age and interest; the Saturday morning bird watching walks are especially popular.

We purchased a family membership four years ago and we visit at least once a season (yes, it is beautiful to visit during the winter!).  The children always enjoy visiting, and the entire campus is stroller friendly (they will ask you to leave stroller outside at some buildings). Plus, they do a nice job of having plenty of clean restrooms spread throughout The Garden. The grounds are accessible by train, local buses, and car- there is a good size parking lot and a garage not too far away. You’ll notice my photos span the past 5 year when we started visiting

If you grew up in New England, you most likely took an elementary school field trip to Old Sturbridge Village in Sturbridge, Massachusetts. When I was publicizing my upcoming trip to Sturbridge Village, dozens of friends, followers, and readers exclaimed “oh I loved going there as a kid!” It is definitely a must visit, but not just when you’re in elementary school. As an adult, I have been able to recall some parts of the village from past visits, yet I still learned a lot of new things when we visited this past weekend.